From The Archives: NOW’s 1991 cover story on Paris Is Burning

Before the doc became a cult classic, director Jennie Livingston and dancer Willi Ninja spoke to us about class, identity and the commercialization of ball culture 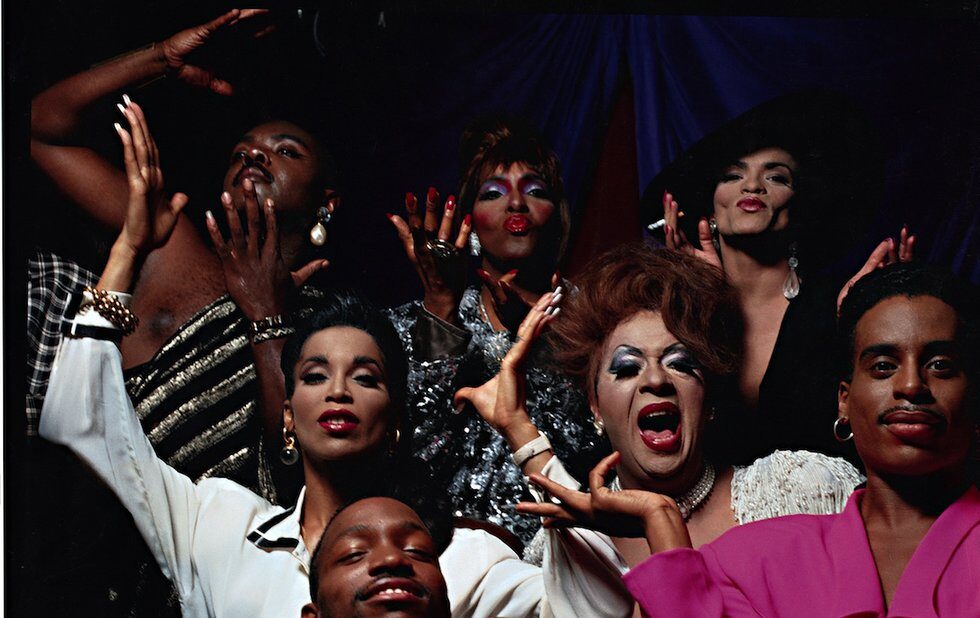 To mark the re-release of Jennie Livingston’s classic documentary on New York City’s queer ball culture, we’re republishing our cover story on the film from the June 13, 1991 issue written by Cameron Bailey (now TIFF’s artistic director and co-head). Some dated terminology has been updated.

Forget Madonna, just for a minute.

Long before the pop queen’s Vogue video transformed the dance innovation of Black, gay, poor Harlemites into an MTV spectacle, Jennie Livingston was working away on her documentary, Paris Is Burning.

Miss Thing was still belting ballads for boyfriend Sean Penn, and for all any of us knew, Vogue was just 400 pages of great ads, but Livingston already had her eye on the style, skill and supreme wit of voguing, the dance movement designed to evoke the stop-action poses of runway models. If Madonna provided the clout to take voguing mainstream, Livingston’s Paris Is Burning remains the richest, most thorough look yet at the Harlem drag ball subculture that gave rise to the phenomenon.

But Livingston was once a novice, too.

“I didn’t know what a ball was,” she admits, speaking to NOW from her home in New York. “My first drag ball was on 13th Street, at a community centre. I was just blown away, because I was so utterly confused. I didn’t really know what was going on.

“I didn’t know whether people were men or women, or what names they were yelling, or what dances they were doing. It was all extremely confusing.”

Paris Is Burning – named after one of the Harlem balls – finally serves as a primer for the uninitiated. It dives right into the world of the Black and Latino gay men who made these balls the social and emotional centre of their lives.

Organizing themselves into families called Houses, they throw these impossibly fabulous events every month, dressing up and parading society’s masquerades for all to see. Best costume in each category wins a prize.

Livingston presents the balls as a joyous celebration of style and profile. Whatever the category, from Butch Queen to Wall Street Executive, the goal is absolute authenticity, or as the performers put it, realness.

“It’s like crossing into the looking glass – Wonderland,” says ball veteran Pepper Labeija, “mother” of the House of Labeija, at one point in the film. “You go in there and you feel 100 per cent right being gay.”

Watch two competitors in drop-dead designer outfits and fierce makeup approach the judges and dare them to check out their chins. Smooth as Naomi Campbell’s, baby. Deal with it.

Check out Willi Ninja, then mother of the House of Ninja and now a world-famous dancer and choreographer, as he crouches down on the floor and strikes a flurry of poses, moving through space like a stop-motion movie.

Hear the encouraging words of the MC. “Opulence! Opulence!” he shouts. “You own everything!”

Madonna got this much right. When your turn comes to walk the ball, you’re a superstar, yes that’s what you are.

“It’s a culture created by people who aren’t given stuff, about a fantasy of having stuff,” Livingston says simply. “Essentially, those fantasies are all of our fantasies.”

A Yale graduate and a photographer by training, Livingston first encountered voguing back in 1985 when she saw Ninja and some friends in Washington Square Park.

“We were just hanging out dancing, and she was curious,” Ninja recalls. “She just came up and asked what we were doing, what type of dancing we were doing.”

Once she’d been to a few balls, she was hooked.

“There are a number of things that personally created affinities for me,” says Livingston. “I’ve always been really conscious of the oppression of gender, and that makes me really impressed with drag queens, because they prove that gender is a construction.” she explains.

“I’m gay, and that makes me feel like I’m a part of the queer culture that is much more my culture than white culture, whatever that is.

“And also I’m Jewish, and whatever rivalries and tensions there are, there are natural correspondences between the Jewish community in America and the African American community – because of various kinds of oppressions and dislocations that have happened to Jews and to Blacks.” 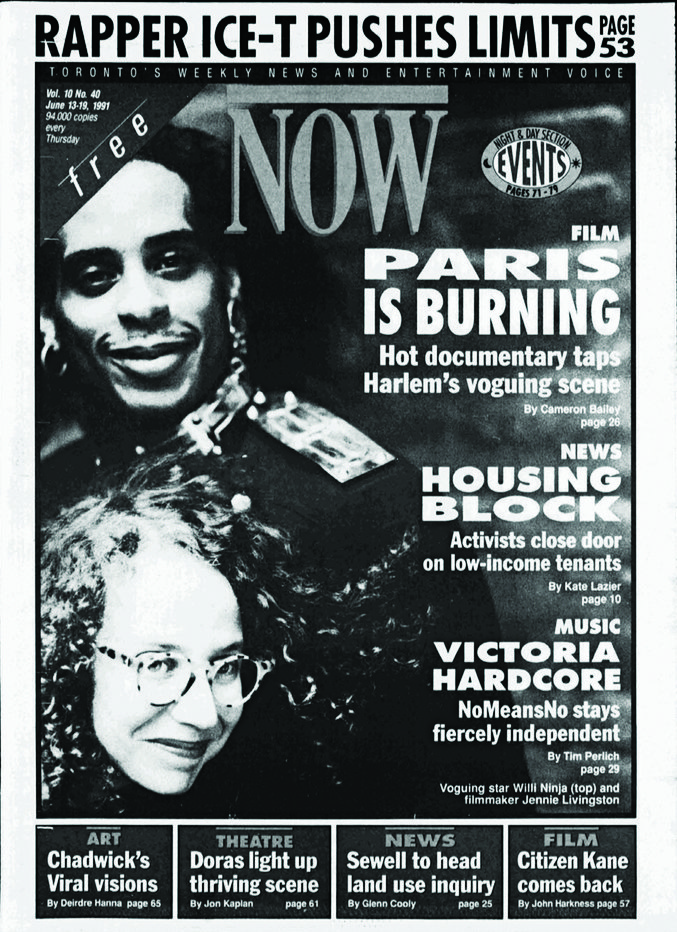 “They’re different – certainly Jews are a much more privileged group in American society than Blacks, by a long shot – but my history isn’t American either, my history is German. And being aware of that I’ve always felt an affinity for Black culture.”

To the skeptical outsider Harlem drag balls may seem like giant steps backward for Black gay identity. Here you have gay men either wanting to be women or making fun of women, and people with no money finding salvation in pretending to be stinking rich.

And then there’s Venus Xtravaganza, a Latino trans woman who is the film’s tragic centre, and who puts her desires very plainly. “I would like to be a spoiled, rich, white girl,” she says. “They get what they want.”

“People have a tendency to be down on the ball world because it doesn’t conform to political correctness,” says Livingston. “But the act of transforming yourself is a political act. It’s just as political to transform yourself into a woman, because that’s what you do.

“I mean, this is a far less materialistic culture. It’s not about buying a BMW. It’s about being a performer once a month. I think it does divert people from thinking, ‘Well, maybe I could go to school, maybe I could become a designer.’

“But the brutal reality is the most talented of ball designers are not going to have a huge shot at becoming a designer in the mainstream. So the alternative is beat your head against a racist wall, a classist wall, a homophobic wall, or design clothes for the ball and at least design clothes.”

The balls may make activists uncomfortable (and cultural theorists giddy) because they stand at the intersection of so many different forces.

They tap the gay male tradition of drag performance that mimics Hollywood glamour. They recall the African American tradition of sending up or signifying on the dominant white culture. They invoke the inverse fascination that Black men (the feared object) have for white women (the desired object). And they uncover the American underclass’s willingness to fantasize about the ever-present opulence that bombards them.

Drag balls are the response of people who’ll likely never face real flashbulbs, never attend a real premiere, never make the cover of People. Mimicry, it goes without saying, is the best revenge.

“I’m glad that Paris Is Burning is reaching people, and it’s a success, and it brings these issues out into the open,” says Livingston. “But whatever happened or didn’t happen, I had a transforming experience that challenged my preconceptions, mainly about class.

“Class just seems so insurmountable. I assumed that I’d always have Black friends, or Latino friends, and I always did. But people from another class?

“At college there were a few people from other classes, but face it, most people who go to Yale are middle- class.”

Among the ballgoers, she met “people from another class who were incredibly articulate, and as aware or more aware of what American society means than most people who had read Marx.”

For all their ambiguous motivations, the balls are evidence of a strong, cohesive community of Black and Latino gay men, which is a positive statement in itself. This world has produced an attitude and a language that has redefined hip self- confidence.

It has made clear that everyone’s outward appearance is in some sense a masquerade – all of us are in drag. Livingston underlines this in the film with cutaway shots to midtown Manhattan’s bony socialites and stiff suits, frighteningly successful in their realness.

And it has launched the careers of people like Ninja, a past collaborator with the likes of Grace Jones, fashion designer Thierry Mugler, robber baron Malcolm McLaren, and of course, Madonna.

“I’m not the only one that succeeded,” Ninja is quick to point out, correcting an impression the film may create. But no one’s succeeded quite like he has. An appearance at a fashion show in the Louvre remains the high point of his career.

“I wish I had a camera, let’s put it that way,” he laughs. “It was a woman’s collection and I’m the only boy, and they’re all white and I’m Black. I come out from between these two girls and buyers’ jaws hit the floor. It was great. I could say hey, I vogued my way down the Louvre.

“The first time I worked with Grace was in Munich and the last time was in Japan. And the Japan show was a ‘scamble.’ She bit my crotch. It was so great. I was like, hey, I got bit in the crotch by Grace Jones. The Japanese kids didn’t know what hit them.”

After that flurry of international fame, the ball world is returning to its roots.

“The balls have moved downtown,” Livingston says. “They’re not in Harlem as often. There are more people from out of the community, meaning people who are middle- class or people who are white or downtown, clubby fashion victims.

“It got a bit commercialized between 89 and 90,” Ninja admits. “Now it’s kind of going back to what it used to be, a lot more fun, a lot more down to earth, not trying to impress anybody anymore.

“When I say commercialized I mean trying to impress the outside public. But then I guess they felt, wait a minute, we’re not getting anything out of this, like people were coming to see them because they’re some kind of spectacle.

“Now it’s more like screw them, let’s do it the way we used to do it.”