Our Dance Of Revolution charts the evolution of activist organizing, from the early 70s to the AIDS crisis in the 80s and Black Lives Matter at the Pride parade 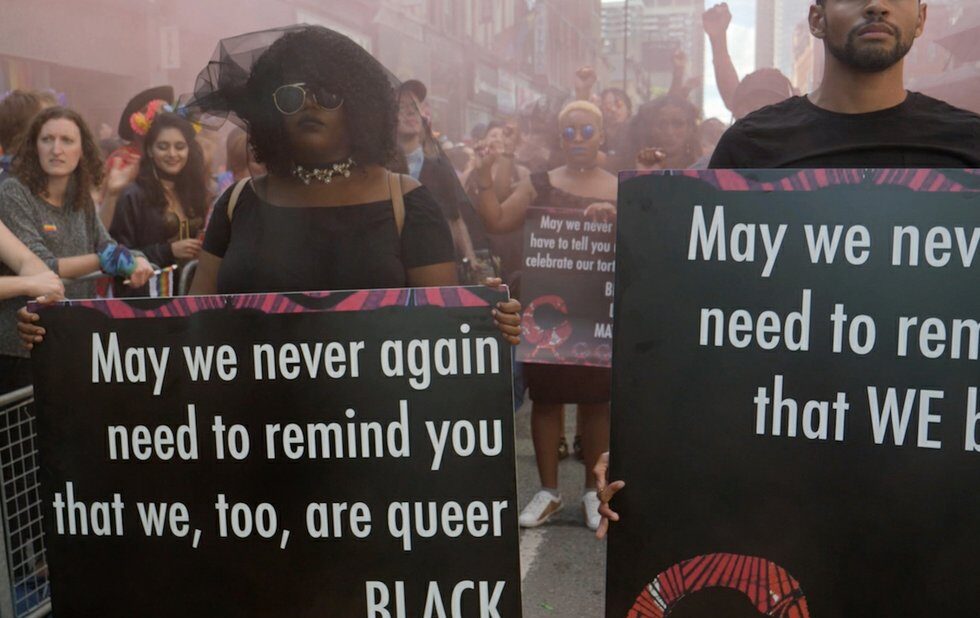 In summer 2018, Philip Pike felt like he was on a treasure hunt. The director was in the final phases of making his latest documentary, Our Dance Of Revolution, a film that traces the history of Black queer activism in Toronto starting from the early 70s to the present.

“I literally spent at least 60 per cent of last summer walking around Toronto with my scanner in a little shopping bag, going from house to house scanning photos,” shares Pike ahead of the film’s world premiere  at Hot Docs.

The beautiful treasure trove of vintage photographs he was gathering were of fearless change-makers: Makeda Silvera (co-founder of 101 Dewson) Debbie Douglas (co-founder of Zami) Douglas Stewart (executive director of the Black Coalition for AIDS Prevention) and the late, fiery Sherona Hall (founder of the Black Action Defence Committee), all of whom spearheaded grassroots community action that had impact that is felt to this day.

Pike was a year into research and development when Black Lives Matter–Toronto stopped the Pride Parade in 2016. For the filmmaker, it was the latest example of something that had been occurring in the city for decades.

“Black Lives Matter, as we try to illustrate in the film, is really the outgrowth, the continuation, the latest iteration of Black, queer organizing, protest, movement in the city,” he says. “They’re part of a lineage.”

That complex lineage can barely be contained in the doc (five extra scenes will be released later this year). Covering feminism, gay liberation, civil rights, police violence and HIV/AIDS, all from the Black Canadian perspective, Our Dance begins the redress of this profoundly neglected part of Canadian history.

“In the 80s, a lot of the cultural Black, queer stuff was being produced in the U.S. – the poets, the filmmakers, the writers,” says Pike, who identifies with filmmaker Marlon Riggs and contemplated including a quote by African-American activist and poet Joseph Beam in the doc. “I did a quick email consultation with about 10 folks who are in the film and some who were not, and it was resoundingly, ‘No. We have our own revolutionary moments here. We have our own Canadian experience.’”

Our Dance is not an easy documentary to view at times. Tragedy, isolation and loss are themes that run throughout it, but so do triumph, celebration and love.

“I tried to be very careful not to gloss over or romanticize people’s pain and struggles, especially the folks on the margins of the margins,” says Pike. “Transgender folk have been killed, have been murdered. But, as [artist and community worker] Courtnay McFarlane says, ‘There is no greater joy than celebrating with the people with whom you are in the struggle.’ We were out picketing. We were out demonstrating. We were out doing all those things that activists do, but we also found time to celebrate – and sometimes the two things happened at the same time.”

Pike views this film as part of a growing recognition of queer people of colour happening in the country, which includes McFarlane’s curated exhibition Legacies In Motion as well as the 2015 preservation and digitizing of the Black Women’s Collective zine, Our Lives.

“It seems like in the last three or four years there’s been a lot of work to unearth these histories of queer people of colour, not just Black queers. Richard Fung redid his 1984 film in 2016, called Re:Orientations. There was a book called Marvellous Grounds [Queer Of Colour], a collection of essays about our history that focuses on queer people of colour.”

Reflecting on the stories contained in the film, Pike finds himself forever humbled by the activists he celebrates.

“There were moments where I really had to sit back and reflect on how much these folks gave so that we could have the Toronto and Ontario we have now,” he says. “They created something because there was nothing. They needed a space to be.

“These are people who put their lives and careers on the line to do this work. It’s really just recognizing, acknowledging and honouring those folks for blazing that path for the rest of us.”