Licorice Pizza, The Matrix Resurrections, The Tragedy Of Macbeth and Being The Ricardos are among this week's big releases 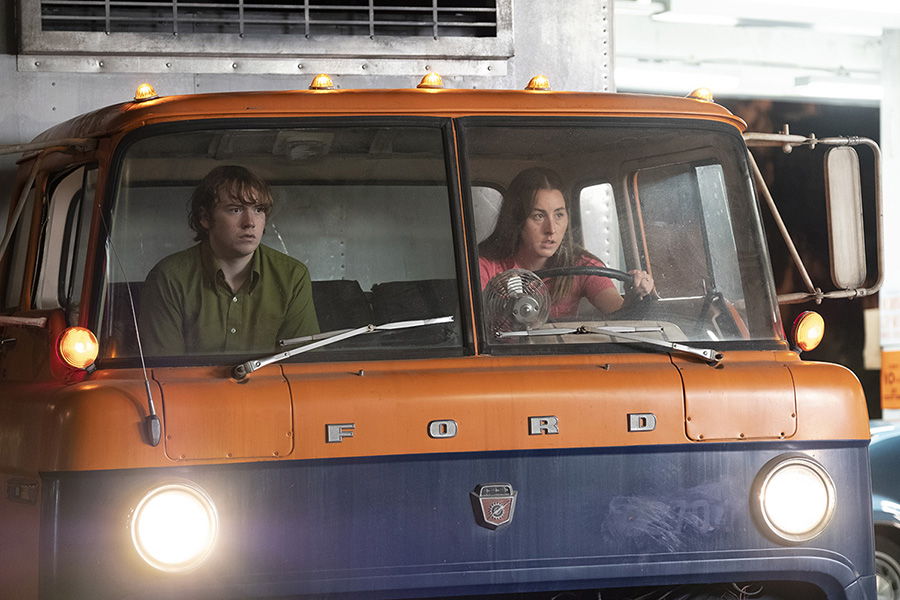 In Anderson’s hilarious and affectionate comedy about young love and growing up, Cooper Hoffman stars as an enterprising 15-year-old named Gary Valentine who sells waterbeds while Alana Haim plays the decade older woman who becomes his deeply conflicted muse and mother hen. Swoon! I suspect Anderson sees Gary as a stand-in for himself. Licorice Pizza just feels so affectionately personal. And there’s something about this young, confident and talented kid who’s living in the shadow of Hollywood and is eager to grow up fast and show the world what he is made of that feels very Andersony. Remember that the director was a great white hype in his 20s, flexing cocksure style in Hard Eight, Boogie Nights and Magnolia.

But for all the skill and passion in his early work, those films lack the control and maturity Anderson brought to monumental films like The Master, Inherent Vice and Phantom Thread. In Licorice Pizza, Anderson isn’t just returning to the San Fernando Valley that he grew up in. He’s going backwards to the terrain of Boogie Nights, Magnolia and Punch-Drunk Love, but now with the maturity we see in his recent work. It’s as if he’s hanging his own growth as a filmmaker onto a story that feels laid-back and chill but still running miles ahead of the competition. 133 min. Opens December 24 exclusively in 70mm at the TIFF Bell Lightbox. NNNNN (Radheyan Simonpillai)

It’s been 18 years since the saga of Neo, Trinity and Morpheus came to a definitive end in The Matrix
Revolutions – so director/co-writer Wachowski, going solo this time, goes back down the rabbit hole for a metanarrative that finds Keanu Reeves’s Thomas Anderson decades older and living in San Francisco, where he’s revered as the designer of a video game trilogy called The Matrix – and where he’s quietly smitten with a woman named Tiffany (Carrie-Anne Moss) who looks an awful lot like the Trinity of the game. It’s a clever way for Wachowski to investigate the cultural impact of the franchise she and her sister created back in the day, and the first movement of this film has fun remixing key beats of the original while acknowledging just how daunting it would be to bring it back to life, as Thomas and his tech-bro boss (Jonathan Groff) have been tasked to do. But that’s ultimately what The Matrix Resurrections has to do as well, and sadly the reality-bending concept is running on fumes. Wachowski and her collaborators seem aware they’re just going through the motions, trading the original trilogy’s dizzying ambition and exquisite action set pieces for a frenzy of digitized stunts and repetitive fights and shootouts. Reeves and Moss have a quiet conversation in a coffee shop so filled with warmth and unspoken longing that it nearly justifies the whole venture… but when that’s the best thing I can say about a Matrix movie, something’s definitely glitchy. 147 min. Now playing in theatres. NN (Norman Wilner)

The downward slide of the Kingsman franchise hits rock bottom – one hopes – with this empty look at the founding of the secret service detailed in the previous Kingsman: The Secret Service and Kingsman: The Golden Circle. But this isn’t really the origin story, it’s more the origin of the origin, a prequel introducing Ralph Fiennes as the Duke of Oxford, a progressive-minded nobleman who’s dedicated his life to pacifism after witnessing the evils of the British Empire during the Boer War. Naturally, World War I challenges his new direction, with his patriotic son Conrad (Harris Dickinson) determined to enlist. But wait, the real threat isn’t Germany but a cabal of vaguely recognizable historical baddies, among them Rasputin, Lenin and Mata Hari, working at the behest of a shadowy Scotsman bent on using the war to return Scotland to independence. So Oxford and his “domestics” (Djimon Hounsou and Gemma Arterton, both utterly wasted) race around Europe and into those signature kinetic action sequences that just reveal how empty this whole thing is. The King’s Man is vacuous; Vaughn barely seems to understand his historical references, stampeding ahead convinced his audience will happily swallow whatever he throws at them next. I hope to god he’s wrong. 131 min. Now playing in theatres. N (NW)

The Tragedy Of Macbeth

Denzel Washington and Frances McDormand take the leads in Coen’s stark, splendid Shakespeare adaptation – which marks his first solo feature since working in tandem with his brother Ethan since Blood Simple four decades ago. Bruno Delbonnel’s sumptuous black-and-white photography references early cinema like Dreyer’s The Passion Of Joan Of Arc, where the camera doesn’t try to hide the staginess but turns it into an aesthetic element. This Macbeth runs briskly through the play, honouring both the text and the pleasure of letting us watch the actors speak it in screen-filling close-ups, their performances as vividly captured as the textures of their wardrobe.

Coen’s fondness for eccentric casting gives us Kathryn Hunter’s remarkable turn as all three of the weird sisters and Alex Hassell, late of Cowboy Bebop, as the cagey Ross, while the decision to cast leads who are decades older than their characters proves a curious strength: their haste to murder Duncan and take his throne now reads as a last, desperate grasp at power. It also lends further dimension to Washington’s charm in Macbeth’s early scenes: the hearty Thane Of Cawdor was just the mask of a man who’s spent his whole life putting people at ease, waiting for the right moment to reveal himself. And McDormand similarly rips into Lady Macbeth with the zeal of someone who’s always wondered how she’d handle the role. Turns out she’s a natural. 106 min. In theatres Saturday (December 25) and available to stream on Apple TV+ January 14. NNNN (NW)

A spiritual companion piece to Alexander Nanau’s Collective, Thomas and Ghosh’s ride-along follows the women of the Indian newspaper Khabar Lahariya in Uttar Pradesh, 2016, as they transition from a traditional print organ to a digital product, YouTube channel and all – which is complicated, since many of the paper’s staffers have no experience with the technology required to accomplish that. And there’s another layer of difficulty: Khabar Lahariya is run entirely by women of the Dalit caste, the lowest level of Indian society, so in addition to cultural misogyny they also have to get past the social roadblocks to confront the men in authority who don’t like being questioned by women. All the while, Narendra Modi’s populist BDP party consolidates power in the runup to a national election, promising an even harder struggle to come… but they’re up for it. A celebration of shoe-leather journalism and indefatigable commitment. 93 minutes. Now streaming at digital TIFF Bell Lightbox. NNNN (NW)

Yes, the prosthetics used to transform Nicole Kidman into Lucille Ball for writer/director Sorkin’s fictionalized look at a turbulent week in the life of the beloved TV comedian and her husband, producer and co-star Desi Arnaz are genuinely off-putting, especially when one considers the relative lack of effort to make Javier Bardem resemble Arnaz. (I think they did something with his nose?)

But what sits even less well is the mess Sorkin makes of their story, reconfiguring a very specific slice of American history into a melodrama about people arguing about morality and creativity from a series of carefully assembled high horses. Set over a week in 1952, as Ball tries to put together an episode I Love Lucy while juggling accusations of being a Communist and her own suspicions of Arnaz’s infidelity, Being The Ricardos is textbook Sorkin: an eclectic group of very smart people argue passionately about literally everything they do, because the thing they do Speaks To The Soul Of A Nation. (If you aren’t sure that’s the message, Sorkin uses modern-day interviews with the surviving writers and producers of I Love Lucy – played by the likes of Ronny Cox and Linda Lavin – to lay it all out for us.)

J.K. Simmons and Nina Arianda steal the picture as I Love Lucy co-stars William Frawley and Vivian Vance, offering sympathetic ears to Lucy and Desi and insulting one another to pass the time. Kidman and Bardem have the thankless task of maintaining their impersonations while having the same argument over and over again. Bardem skates by with surface charm and less screen time; Kidman suffers from both the makeup job and Sorkin’s conception of her character as both a calculating pragmatist and unerring perfectionist who demands people respect her process even when it means getting them out of bed at 3 in the morning to workshop a bit of business. I couldn’t tell if I was supposed to see Ball as the movie’s hero or its heavy. 128 min. Now streaming on Amazon Prime Video Canada. NN (NW)