Video: The stars of Workin’ Moms on season 5, Calgary and COVID

In a video interview, the CBC comedy show's stars explain the tension between addressing COVID and escapist TV 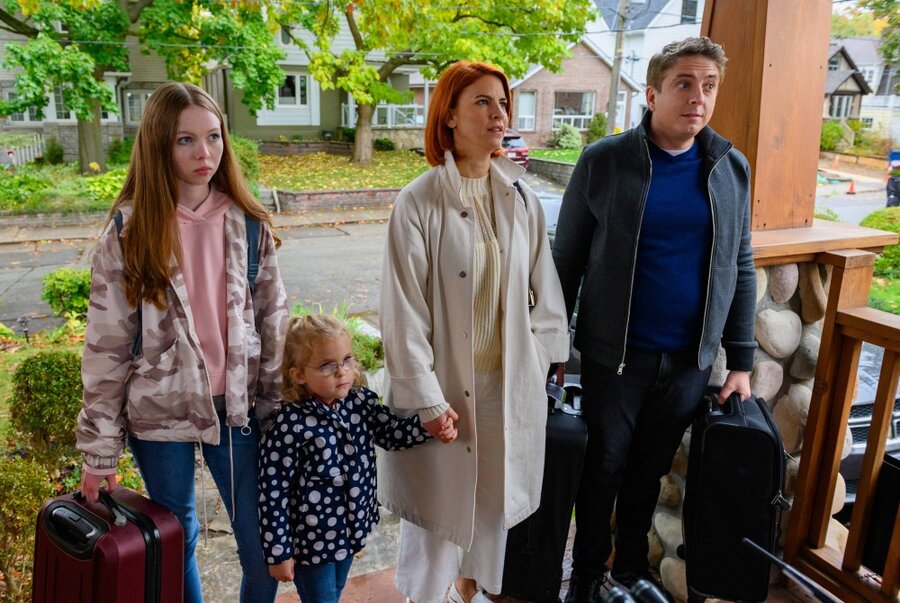 Dani Kind (third from left) discusses the potential in the Carsons' move to Calgary in season 5 of Workin' Moms.

Since movie and TV production very carefully resumed last summer, I’ve been talking to people who make Wynonna Earp, Kim’s Convenience, Pretty Hard Cases about the challenges of making entertainment during a pandemic.

For the most part, TV shows are preferring to pretend COVID doesn’t exist; as Kim’s co-star Simu Liu pointed out, it’s about giving their viewers half an hour of escape.

Like all of those shows, the new season of Catherine Reitman’s Workin’ Moms was shot during the pandemic, under all advisable safety protocols.

But unlike them, the season premiere does acknowledge our current reality – for about 40 seconds. It’s pretty clever, and it lets producer/star Reitman vault past the stuff her audience would rather not see and get back to the business of watching the show’s characters lives spin out of control.

“The timing of it was pretty crazy,” Reitman says on a Zoom call with co-stars Dani Kind, Juno Rinaldi and Jessalyn Wanlim. “Our writers room opened in February of 2020 when the virus was very much alive, but we didn’t really know about it. We broke to draft scripts in March, when the world shut down. The writers broke the same day that the world shut down.

“Of course the scripts had nothing to do with the coronavirus,” she adds. “They were just the arcs that we know and love… And then as we came back, we became increasingly aware we’ve got to acknowledge this in some way.”

But leaning too hard into the pandemic didn’t seem appealing, Reitman adds. It’s a tension facing a lot of TV creators: acknowledge what’s going on in the world or give people escapist TV.

“The idea was that people [would be] looking for distraction, looking to tune in and see the characters that they know and love, and laugh at problems that once seemed like problems and now seem like dreams,” she says.

Pandemic aside, the usual complications of Workin’ Moms continue to mount in the new season. One of the bigger surprises is the arc crafted for Dani Kind’s Anne, who moves her family to Calgary when husband Lionel (Ryan Belleville) lands a new job – and finds herself entirely unmoored without her Toronto friends.

“It’s really smart to have her move away,” Kind says. “It’s called Workin’ Moms but it’s about, like, working regular people. Moving away from your friends at this age, moving outside of Toronto because you can’t afford to live here anymore, these are all normal things. We don’t work closely with the writers, so it’s really exciting when we get the scripts to see what the heck is gonna happen. and navigating those relationships.”

She’s also happy to explore who the type-A Anne becomes when her identity is challenged by the move.

“She’s in Calgary, trying to make friends at this age – that’s a really tough and common thing. So the fact that we get to look at it this year is really exciting. And it’s crazy. It’s a great arc.”

Season 5 of Workin’ Moms premieres Tuesday (February 16) at 9 pm on CBC and CBC Gem. Watch the full conversation on YouTube below.