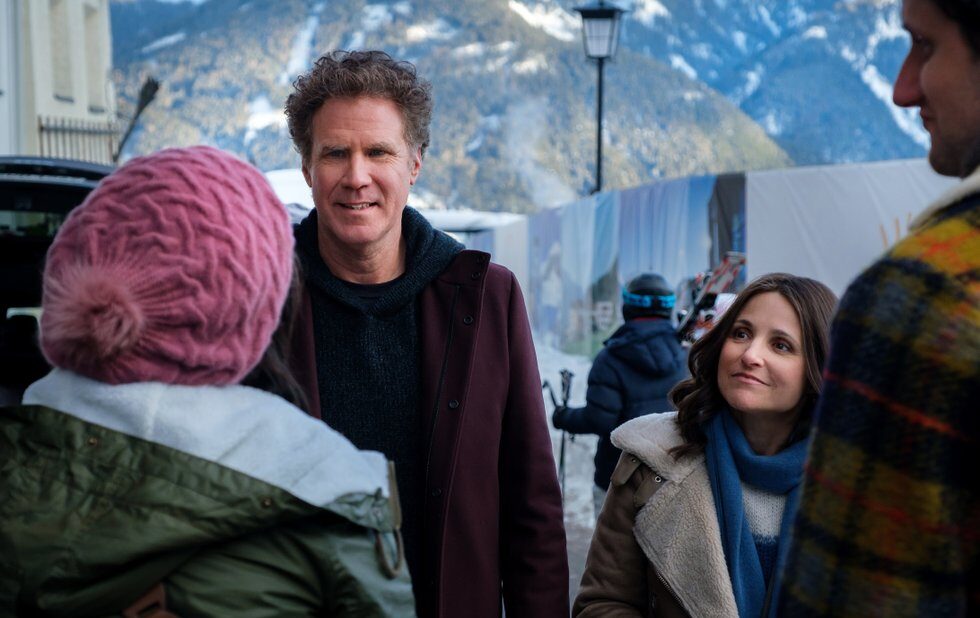 Even if you haven’t seen Ruben Östlund’s 2014 Force Majeure, you might be familiar with the clip that went viral a year or so back – the one where a few dozen people fly into a panic at an outdoor restaurant when a wall of snow comes at them from a nearby mountain. Some of them run some of them stay and are engulfed by a mist of powder. It looks scarier than it is, which is the point.

Östlund’s film uses that as its inciting incident, exploring the way a bourgeois family’s comfortable domesticity is shattered by one member’s reflexive cowardice. Force Majeure is both an excruciating drama and a queasily funny comedy, unpacking male fragility and gender roles and finding nothing behind them but air.

Anyway. Force Majeure was an international hit, and so now there is an American remake: Downhill, starring Will Ferrell and Julia Louis-Dreyfus in the roles created by Johannes Bah Kuhnke and Lisa Loven Kongsli. It’s directed and co-written by Nat Faxon and Jim Rash, actors and filmmakers who shared an Oscar for the screenplay of The Descendants and went on to write and direct the charming, complex The Way Way Back. They should not have bothered with this one.

Downhill bills itself as being “inspired” by Östlund’s movie, but that word does not apply to Faxon and Rash’s work. They’ve taken no inspiration at all from Östlund’s excoriation of male fragility, just the core concept… and they’ve botched that, too. The setup is the same, and three or four key scenes play out just as they did the first time around, but now the story is given an overtly comic tone that takes the sting out of the entire premise.

The very first scene, in which our heroes are greeted by Miranda Otto’s oversharing, syntax-mangling resort coordinator, is pitched for wackiness, the awkward Americans recoiling from the efficient but pushy European. But no one seems to have told Louis-Dreyfus about the new approach she’s giving a dramatic performance while co-star Ferrell is going for something bigger and broader.

This is a criticism of the movie, not the actor: Louis-Dreyfus is very good, and I’d love to see what she would have done in a straight remake of Force Majeure. Come to think of it, I bet Ferrell would have been great in that project, too it’s not a stretch to picture him as the floundering patriarch of Östlund’s film. But Faxon and Rash trade desperation for truculent confusion, and their reworked script deprives the actor of his character’s best moment.

And then there’s the technical side: where Östlund used long, unforgiving takes to trap his subjects in space with each other, Faxon and Rash just sort of slap scenes together with no real style or rhythm, and trap the audience rather than their characters: their movie runs under an hour and a half, but it takes an eternity to play out.

Look, I understand that a lot of people haven’t seen Force Majeure, and that this version is likely to reach a wider audience. (It’s now being distributed by Disney, after all.) But Downhill is such a pale, hollow thing that I can’t imagine anyone getting anything out of it, whether or not they’re familiar with the original work.

That said, the couple sitting next to me at my preview screening had never heard of Force Majeure, and they enjoyed Faxon and Rash’s movie a lot more than I did. They also played with their phones, discussed the characters and performances throughout, and asked me if I could explain the ending. So screw them.

Also, Force Majeure is streaming for free on Hoopla. All you need is a library card. Watch that instead.