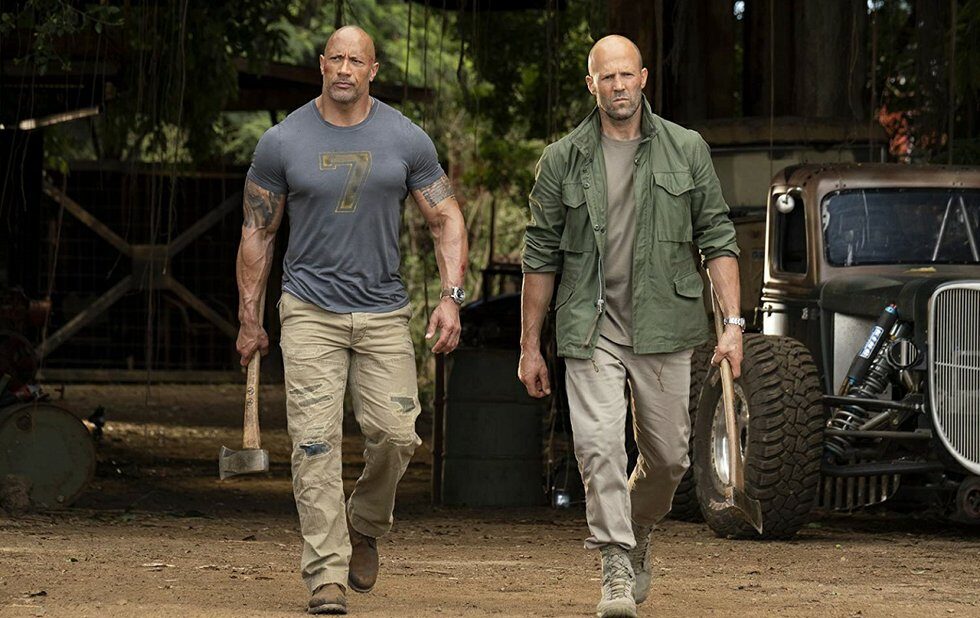 Fast & Furious Presents Hobbs & Shaw is basically a movie where The Rock and The Transporter save the world from the plot of Mission: Impossible II.

Sure, Dwayne Johnson and Jason Statham are answering to different names, but they’re playing super-spies who’s to say “Luke Hobbs” and “Deckard Shaw” aren’t just their latest cover identities? Johnson even does the eyebrow thing and spends one major action sequence shirtless and throwing people around Statham, for his part, slips effortlessly back to the terse competence, pissy attitude and gymnastic fighting style that first established him as an action star. Hell, for additional universe-building they even throw in a reference to his role in the Italian Job remake.

Hobbs & Shaw is that kind of movie. You’re either on board with the genre-cornucopia concept or you’re not. And if you are, well, buckle up.

Johnson and Statham – whose ridiculous throw-downs at the beginning and end of Furious Seven were a highlight of that installment, and whose cranky chemistry was quickly repurposed to resentful partnership in a prison break in The Fate Of The Furious – are the stars of this stand-alone spinoff, which sends them racing around the world to keep a burned MI-6 agent (Vanessa Kirby) out of the clutches of a scientifically enhanced baddie (Idris Elba) who wants the lethal virus she’s injected into her system.

It’s what you’d get if you dropped the scripts of Mission: Impossible II and Tango & Cash in front of a giant fan and then asked the producers of the world’s predominant hoods-n-hot-rods franchise to put everything back together. This is not necessarily a criticism when you think about it, it’s where the series has been heading all along. The first film was a blatant rip-off of Point Break, so why not just keep building new machines from old parts?

Hobbs & Shaw is a lot of fun for a while thanks to an energetic first act, some unexpected cameos and a script that makes the most of Johnson’s and Statham’s childish one-upmanship, Kirby’s exasperated competence and Elba’s gleeful villainy. Everybody’s having a really great time, and the absence of Vin Diesel’s one-note patriarch Dominic Toretto definitely loosens up the vibe.

Even the best F&F movies can be heard wheezing when Dom starts monologuing about family maybe it’s just that director David Leitch – who cut his teeth co-directing John Wick before striking out on his own with Atomic Blonde and Deadpool 2 – brought fresh eyes to the classic action-movie structure, but Hobbs & Shaw finds a way to incorporate that theme with a minimum of drag.

I did say “for a while,” though, and I must acknowledge that the film eventually does succumb to the same crushing, outsized spectacle that ground down the fourth, sixth and eighth Furious movies. All the chases and fights become a little monotonous, and it doesn’t help that the second-act capper is shot almost entirely in shades of dull gray. (The prelude to that sequence, a near-silent fight scene that plays out in adjoining, windowed corridors, is far more involving, making the most of Johnson and Statham’s comic timing as well as their physical prowess.)

But even if Hobbs & Shaw comes up a little short, F&F fans won’t be disappointed. The movie delivers the constant, ridiculous action they’ve come to expect, along with the usual themes of family and friendship. It just doesn’t hit the same level of transcendent ridiculousness that distinguishes the franchise’s best chapters.