NOW MagazineMovies & TVReviewsReview: Late Night is a funny and shrewd look at diversity in the entertainment industry

Review: Late Night is a funny and shrewd look at diversity in the entertainment industry 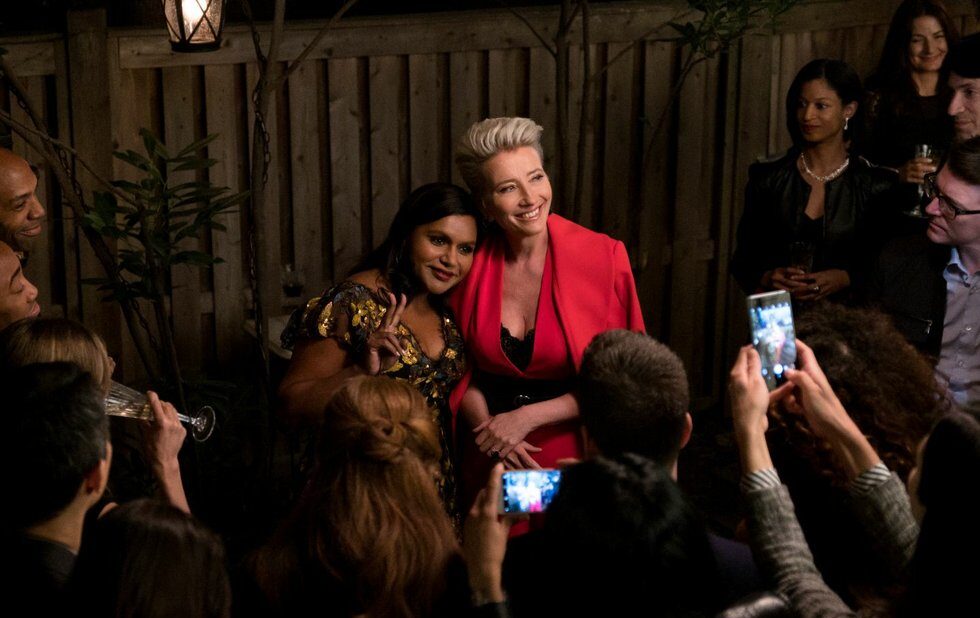 We’ve seen the slow pivot in Hollywood after #OscarsSoWhite and #MeToo, with women and POC actors and filmmakers winning more opportunities – and those wins subsequently being marketed as such. Some are triumphant (Black Panther) while others feel like they’re pandering to identity politics so that studios can pat themselves on the back and get such obligations out the way (Ocean’s 8, Captain Marvel).

Late Night, smartly written by Mindy Kaling and directed by Canadian-born Nisha Ganatra, is different. The workplace comedy isn’t so much a reactionary product of the aforementioned movements. Instead, it’s bluntly about the reaction and the growing pains that come with Hollywood’s slow response to a new climate.

Kaling, an actor and comic who also wrote on The Office, pulls back the curtain and gives us a look behind the scenes at a TV studio dying to stay relevant. It’s sharp and insightful but also funny, sweet and easy to digest.

Emma Thompson predictably delivers a powerhouse performance as long-running late-night television host Katherine Newbury. Katherine’s a rare (perhaps even unbelievable) specimen, holding onto a gig dominated by the boys. Her white feminism lends her a critical prowess when dressing down the patriarchy, moments Thompson relishes with her elegant eye-rolls. But she’s also arrogant and dismissive toward everyone, not just white men but also women and millennials whose viewing habits are putting the squeeze on her position.

After being called out for not having any women in her writer’s room, Katherine presses on her staff manager Brad (Denis O’Hare) to hurry up and find one. Enter Kaling’s Molly Patel, a chirpy, motivated chemical plant employee whose only experience with comedy writing is the stand-up charity events she organizes in her community.

Molly lands an interview with Brad through a mentorship program at her chemical plant that has a parent company whose parent company also hovers over the television studio. The baffling set-up leaves Brad scratching his head, failing to see what qualifies Molly for the job, but he picks her anyway because he desperately needs to hire a woman.

It’s an uproarious sequence that leans toward ridiculous, but the absurdity of it is also precise and ruthlessly honest. On one side of the desk you have Kaling’s Molly, an Indian-American working-class woman who holds a regular job to afford a living and doesn’t have the privilege to train and intern in entertainment for free. Hence, zero qualifications (per se).

And on the other side you have a white, male hiring manager who feels pressured to pander to the current hunger for diversity. He hires the first WOC he sees, pretty much counting on her to fail. That way he gets to say he tried while also proving a point that he already believes: diversity hiring over meritocracy is ridiculous.

Late Night doesn’t excuse white ignorance. But the film doesn’t make assholes of the people who don’t recognize the comforts they enjoy or dismissive assumptions they make. There’s generosity in Kaling’s writing – almost everyone has their insecurities and benefits from a learning curve that feels earned rather than pat.

The lessons aren’t learned by Molly walking in and shutting down the haters with a “strong female” ferocity. That doesn’t happen since Molly doesn’t have that privilege. That’s something Thompson’s Katherine is in a position to do. As a woman of colour Molly has to figure out other ways to be heard, lest she be seen as disruptive and aggressive.

She weathers condescension and stays positive in ways some might find weak or naïve. She walks in on her first day with treats in hand and a wide smile on her face, trying to ingratiate herself to a room while knowing that everyone would rather she stayed invisible.

Her character is there to push boundaries – her own and those set by her environment. How she does it is fascinating. While Molly’s smiling, she’s also scanning the room for every opportunity, like the raptors in Jurassic Park looking for weaknesses in the fences. When someone’s guard is down, she swoops in, whether it’s to write jokes for the opening monologue or cozily rest her head on hostile Katherine’s shoulder.

There’s a cunningness to Molly’s bubbly demeanour, and it radiates outward, permeating Late Night as a whole. The movie keeps things likable, accessible and even silly at times but without compromising an incisive and critical look at how deep biases run in the entertainment industry.

It’s got rom-com trappings, but the unexpected relationship that makes us feel warm and fuzzy here is that between a brown woman and a workplace that’s behind the times. There’s chemistry and fun, but Late Night never forgets that there’s still a lot of work to be done.