NOW MagazineMovies & TVReviewsTV review: Stranger Things 3 is grislier and funnier than past seasons

TV review: Stranger Things 3 is grislier and funnier than past seasons

What season three of the nostalgic Netflix series lacks in scares, it makes up for with exciting spectacle 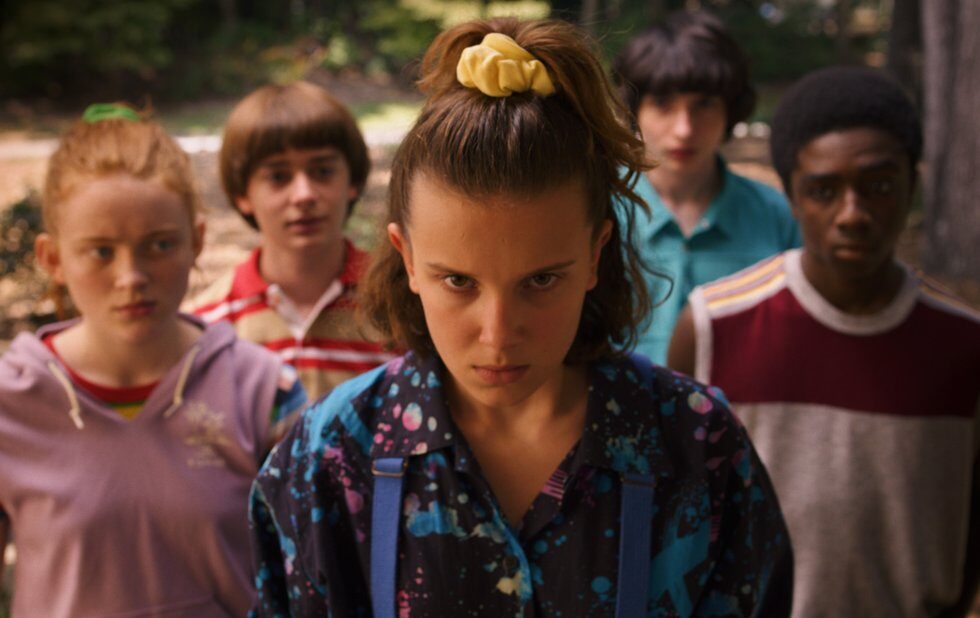 The third season of Netflix’s lovingly nostalgic and (more often than not) thrilling series Stranger Things is bigger, grislier and funnier than previous ones.

The latest, which premieres July 4, may not give you the cold sweats the original so slowly and expertly cooked up with its paranormal mystery and ingenious use of holiday lighting. Such chills seem impossible now that fans are all too familiar with the ins and outs of the Upside Down and its lurking Demogorgons and Mind Flayer. Yet what the third season lacks in scares, it makes up for in exciting spectacle.

But it takes a while for the excitement to kick in after a rough start. The new season begins in shambles. The growing (both in age and population) ensemble cast are splintered with various personal dramas and run-ins with mysterious forces, while the narrative skips about inelegantly between them.

As things progress, the pace picks up and each thread grows more compelling, predictably converging into a big and operatic climax that’s a helluva lot more fun and comical than the previous season’s blundered, CGI-heavy finale.

There’s a creature in Stranger Things 3 that actually works as the perfect metaphor for the way this show comes together. But I can’t tell you anything about it.

There’s a lot I can’t say: Netflix provided a laundry list of unmentionable spoilers in a restrictive non-disclosure agreement reviewers had to sign before screening all eight episodes. According to that list, we can’t identify villains who are introduced in the season’s opening prologue. Nor, in this Netflix-sanctioned spoiler-free review, can we discuss a development that you might already glean from the trailer.

What I can tell you is that it all begins with an annoying romance. Finn Wolfhard’s Mike and Mille Bobby Brown’s superhuman Eleven are now officially a thing, stealing away time from their misfit crew in order to sneak in as much PG-rated smooching as possible. David Harbour’s burly and temperamental Sheriff Hopper, who became Eleven’s over-protective guardian in the second season, is about to blow his lid if the two pubescent teens don’t set some boundaries.

That central relationship is also crushing for Will (Noah Schnapp), the Upside Down’s first hostage who clings to playing Dungeons And Dragons while his friends grow up and move on with their love lives.

The minor dramas that creates rifts among friends, families and couples come fast and hasty in the first couple of episodes, as if to quickly get some character work in before the large group splits into teams, unaware that they’re all battling the same evil forces at different fronts.

Eleven senses a grisly abduction. Will feels a chill down his spine telling him that something has returned. Nancy (Natalia Dyer), now working as an under-appreciated intern at the local paper, chases a story about missing fertilizer. Joyce (Winona Ryder) notices magnets falling off her fridge. Dustin (Gaten Matarazzo) intercepts suspiciously coded messages transmitted across Hawkins. And a henchman who moves like the Terminator is terrorizing will-they-or-wont-they couple Hopper and Joyce.

As with the second season, Terminator director James Cameron remains an influence on Stranger Things, on top of season one’s Steven Spielberg, Stephen King and The Goonies pedigree. This season adds Invasion Of The Body Snatchers and Red Dawn to the show’s influences. As always, the winks and nods to 80s pop-culture are obvious and even a little cloying, but Stranger Things has always been remarkable for bouncing around and playing within a referential funhouse, allowing the hallmarks to feed into the adventures and not the other way around.

The most impeccably designed and purposefully gaudy signposts for neon-lit Americana are Hawkins new shopping mall, Starcourt, and a July 4th fun fair. These spaces, where manufactured pleasures of old converge, are also terrific stages for this show’s biggest set pieces. 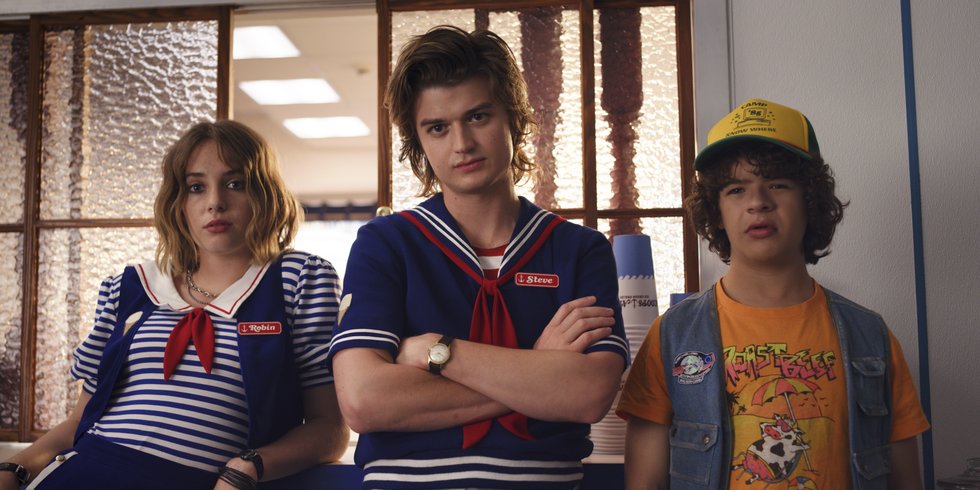 Maya Hawke (left) is a dazzling newcomer to the Stranger Things franchise.

Hawke, the most dazzling newcomer to the series, is daughter to Uma Thurman and Ethan Hawke. She works magic with Keery’s Steve, Dustin and Erica (Priah Ferguson), who was introduced in season two as little sister to Caleb McLaughlin’s Lucas.

The unlikely quartet, who have a great time needling each other, catch wind that some sinister adults are up to no good in Hawkins. They get in on the spy games that make for the show’s most lightweight and hilarious escapades.

This group elevates the entire season. Whenever the other threads drag, or get too dreary or familiar, Steve, Robin, Dustin and Erica serve up thrills and comic relief, as they find themselves scrambling through ventilation ducts into secret labs with green goo and machine-guns.

They’re also the most emotionally satisfying group. The chemistry and teamwork among characters who are so far-flung from each other reminds us why this series worked so well to begin with.