The Toronto International Film Festival announced its Canadian programming on Wednesday (July 31), and there’s a lot to take in. Ellen Page has directed a documentary. Albert Shin made a thriller. Alanis Obomsawin will screen her 53rd film. And Jeff Barnaby made his zombie movie.

In all, 21 features and 25 shorts were announced this morning, with the possibility of further news to come at the launch conference later this afternoon. (Several Canadian galas and special presentations were announced last week.)

Forty-six per cent of the features, and 56 per cent of the shorts, are directed by women. (And as long as we’re looking at percentages, five of the nine artists highlighted in NOW’s spring guide to rising Canadian screen stars earlier this year – Aisling Chin-Yee, Grace Glowicki, Kathleen Hepburn and Elle-Máijá Tailfeathers and Kawennáhere Devery Jacobs – have projects in the festival.)

Clifton Hill, Toronto filmmaker Shin’s long-awaited followup to his 2014 drama In Her Place, will make its world premiere as a special presentation. The film stars Tuppence Middleton as a pathological liar who inherits a Niagara Falls motel, and Hannah Gross, David Cronenberg, Marie-Josée Croze and Eric Johnson as people in her orbit.

Harry Cepka’s Raf stars Grace Glowicki and Jesse Stanley as two women who change each other’s lives. And Montreal producer Aisling Chin-Yee makes her directorial debut with The Rest Of Us, starring Heather Graham as a woman who invites her ex-husband’s second wife (Jodi Balfour) and daughter (Abigail Pniowski) to live with her and her daughter (Sophie Nélisse).

Seven films will screen in Contemporary World Cinema. Louise Archambault follows her 2013 Canadian Screen Award-winner Gabrielle with And The Birds Rained Down, a drama starring Kenneth Welsh, Gilbert Sicotte and Andrée Lachapelle as hermits whose remote habitat is threatened by wildfires – and by the arrival of two very different women. Sophie Deraspe, director of Vital Signs and The Amina Profile, returns with an adaptation of Sophocles’s Antigone, which transposes the action to contemporary Montreal and makes its principal characters a family of immigrants.

Castle In The Ground, writer/director Joey Klein’s follow-up to The Other Half, stars Alex Wolff and Imogen Poots as neighbours drawn to one another in the midst of an opioid epidemic.

And Calvin Thomas and Yonah Lewis (Amy George, The Oxbow Cure) return to the festival with White Lie, starring Kacey Rohl – one of this year’s TIFF Rising Stars – as a college student who fakes a cancer diagnosis. Given the tenor of Thomas and Lewis’s other films, it is unlikely to be a comedy. 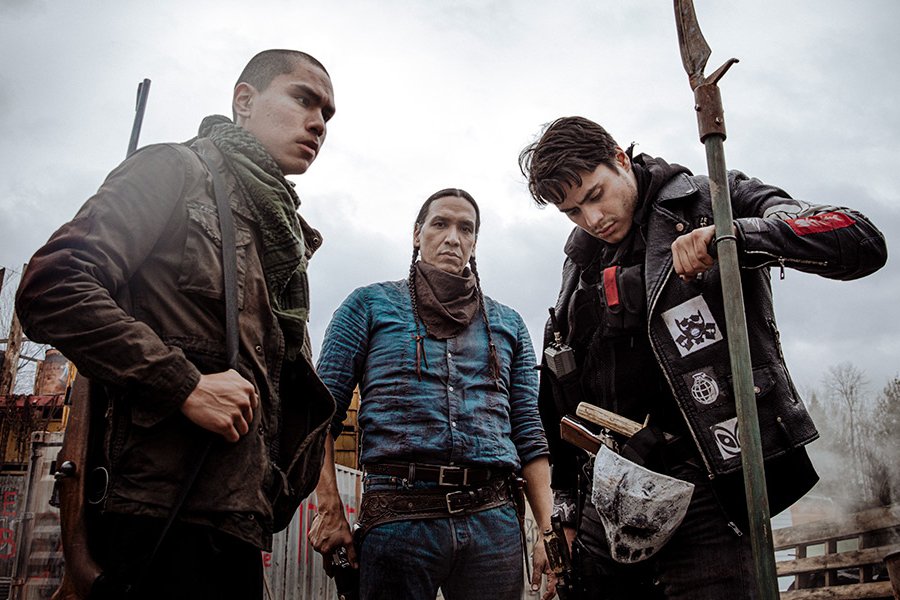 Ellen Page’s project, There’s Something In The Water, is one of three new Canadian feature documentaries screening in the TIFF Docs program. Directed Page and Ian Daniel, her partner on Vice’s Gaycation series, it’s described as a film about environmental racism, built on “deeply personal and political” conversations with women dealing with environmental crises in the Indigenous and African communities in Page’s native Nova Scotia.

Alan Zweig, whose documentary Hurt won TIFF’s first Platform prize in 2015, will premiere Coppers, in which retired police officers recount their careers in their own words, while Montreal expat Yung Chang (Up The Yangtze, The Fruit Hunters) returns with This Is Not A Movie, a profile of veteran journalist Robert Fisk and his status in an age where the concept of objective truth has lost all meaning.

And veteran documentary filmmaker Alanis Obomsawin will bring her 53rd work, Jordan River Anderson, The Messenger, to the Masters program. The doc tells the story of a five-year-old Manitoba child from the Norway House Cree Nation Reserve – the location of Obomsawin’s 2017 film Our People Will Be Healed – whose death led to the creation of Jordan’s Principle, a child-first directive designed to ensure First Nations children receive equitable access to government-funded services.

Obomsawin and Chung’s films are both produced by the National Film Board of Canada. The NFB is also premiering three shorts at TIFF: Christopher Auchter’s Now Is The Time, Sandra Ignagni’s Highway To Heaven: A Mosaic In One Mile and Theodore Ushev’s animated The Physics Of Sorrow.

The Short Cuts program will include 20 new Canadian productions, including work from Sofia Banzhaf (I Am In The World As Free And Slender As A Deer On A Plain), Daniel Cockburn (God’s Nightmares), Brandon Cronenberg (Please Speak Continuously And Describe Your Experiences As They Come To You), Renuka Jeyapalan (Life Support), Ariane Louis-Seize (The Depths) Anna Maguire (It’s Nothing), Aaron Poole (Oracle) and Chloé Robichaud (Delphine).

Five additional shorts will screen in the experimental Wavelengths program: Blake Williams’s 2008, Annie MacDonell’s Book Of Hours and Ryan Ferko’s Hrvoji, Look At You From The Tower, all world premieres, and Miryam Charles’s Second Generation and Gabino Rodríguez and Nicolás Pereda’s My Skin, Luminous, both North American premieres.

Zacharias Kunuk’s One Day In The Life Of Noah Piugattuk, which screened as a video installation at the Venice Biennale earlier this year, will play TIFF as a special event. The two-hour narrative, set in Kapuivik in 1961, is about an Inuit hunter pressured by a Canadian official to move his family into permanent housing.

Canadian films previously announced for this year’s festival include Semi Chellas’s American Woman and François Girard’s The Song Of Names, both gala presentations, Atom Egoyan’s Guest Of Honour, a special presentation, and Daniel Roher’s documentary Once Were Brothers: Robbie Robertson And The Band, which opens the festival on September 5. Barry Avrich’s documentary David Foster: Off The Record, profiling the legendary music producer, was announced yesterday as a special event.

No Dolan or Rob Ford?

Missing from the Canadian slate was Xavier Dolan’s new film Matthias Et Maxine, which premiered at Cannes earlier this year it’s possible TIFF is saving that one for a big surprise announcement at this afternoon’s press conference, as they did last year with Dolan’s The Death And Life Of John F. Donovan. (That didn’t work out too well, though.)

The 43rd Toronto International Film Festival runs from September 5-15. Full details on the announced features and shorts can be found here.