Drake cooked up the concept, says the Toronto director, who also makes a cameo as himself 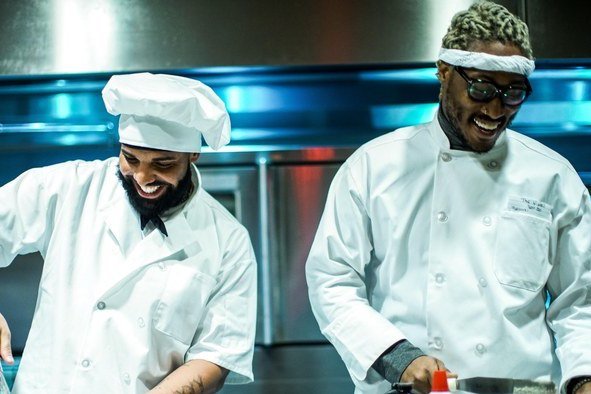 They’re at shifts picking up trash, working as mechanics, offering IT assistance to customers, baking cakes and serving fast food. Finally, they scrap enough coin together to make some music and shoot a video directed by Director X (playing himself), whose production assistant and cameraman turn out to be Drake and Future.

“It was Drake’s concept,” says Director X, who has worked with Drizzy on several video, including blockbusters like HYFR, Hotline Bling and Rihanna’s Work. “A lot of times he has the spark of an idea, and we build it up for him. This is another one of those. He had the vision.”

X jumped on a call with NOW on Friday morning while waiting on a delayed flight to LA. He’s been living and working between YYZ and LAX, most recently flying high off Con Altura’s success. The video he directed for Rosalía and J Balvin’s catchy reggaeton hit has now cleared a billion views on YouTube.

Like Travis Scott’s Sicko Mode or some of the tracks on Drake and Future’s 2015 collaborative mixtape What A Time To Be Alive, Life Is Good feels like two songs attached at the hip. Drake is the featured artist, but he raps the whole first minute and a half about his busy lifestyle before the beat switches and Future takes over.

The video, which features Lil Yachty, 21 Savage, Mike Will Made-It and Big Bank Black in cameos, already crossed a 1.5 million views before noon on Friday.

There are Started From The Bottom echoes, with Drake once again ditching the OVO gear and donning service and retail uniforms, prioritizing working-class routines over showy excess.

“Each time he’s done that, there’s a narrative from the music that pushes it,” says X, pointing to the first line in the song where Drake raps “working on the weekend like usual” and “haven’t done my taxes, I’m too turnt up.”

Throughout it all Drake’s humour is on display, with the “How 2 Fix A Car Reel Reel Good” manual he uses in the mechanic shop, the “No bills larger than $10” sign at the cannabis-scented drive-thru, and the video-within-a-video gag that has X stepping on camera.

“We know that Drake can be a really great comedic actor,” says X. “He just brings it.”

Listen to Life Is Good in NOW’s weekly Spotify playlist #NOWplaying below and subscribe here for a new one every week.