The battle of the soundalike pop stars Ke$ha and Uffie 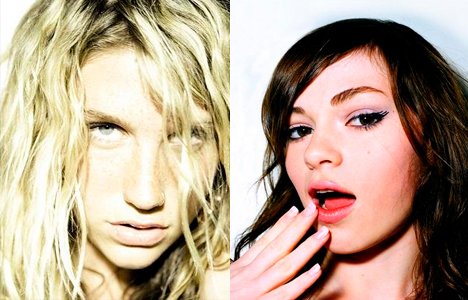 Never thought the day would come when much-maligned club rapper Uffie would be due credit for an original concept, but then along came Ke$ha and here we are.

Ke$ha, in case you haven’t looked at the internet in the last 30 days, is a young auto-tuned singer from Los Angeles with a bona fide hit in Tik Tok – a vapid anthem to living hard and, as she puts its, brushing your teeth with a bottle of Jack Daniels. She is 22 and putting the heat on Lady GaGa.

Tik Tok is ubiquitous right now. It currently has 32 million plays on YouTube and its chorus is undeniably catchy. But what about that verse? If you remember (and it was all of three years ago now) the debut record from French DJ duo Justice you might be having a WTF moment.

Uffie’s track on Cross – The Party – is almost identical to Ke$ha’s Tik Tok in both the style of vocal delivery and lyrical structure. Uffie, who is on the Ed Banger label along with Justice, describes another crazy night on the town with her girls. It’s hardly groundbreaking material here, but let’s give Uff some due.

In fact, with Ke$ha’s expensively-produced debut that has pro songwriters like Dr. Luke and Max Martin (remember the Swede who wrote Britney’s Hit Me One More Time?) all in the kitchen cooking up hits for yet another ready-made pop star, I have a new appreciation for Uffie.

Uffie, also 22, gets routinely roasted for her poor rap skills and shallow lyrical subject matter, and the fact she’s romantically linked to Ed Banger producer Mr. Oizo didn’t help her credibility, since it was hard to understand how well-known French DJs were suddenly big fans of a white teenage girl rapper from Florida . Unfortunately for Uffie, she exists in the unforgiving indie rock and electro scenes where these things matter. Ke$ha on the other hand gets to be edgy just by comparison to musical peers like Miley Cyrus.

While some critics regretfully trumpet Ke$ha and proclaim her an artist to watch in 2010, Uffie is quietly getting ready to drop her first full-length album in May 2010 called Sex Dreams and Denim Jeans. The first single is a chopped-up Oizo joint called MC’s Can Kiss where Uffie defends herself her against the aforementioned haters. Hopefully, in light of bland Ke$ha, everyone will go a little easier on the Uff. [rssbreak]