DMST go back to band basics 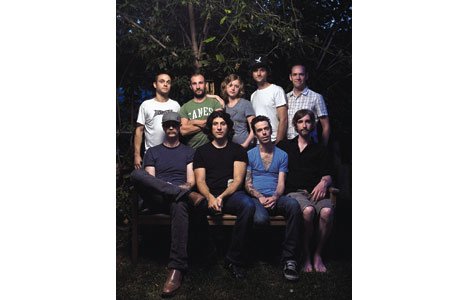 In these days of declining record sales, many bands are returning to the earlier business model of supporting themselves through constant touring. But that doesn’t work for all bands, including sprawling indie outfits like Do Make Say Think.

“That strategy probably works really well for bands that have reached a certain threshold in terms of the crowds they can draw, or for small duos and trios, but we’re unfortunately on the border in both cases,” says multi-instrumentalist Ohad Benchetrit as their tour bus drives through Michigan.

“[Touring] does become a challenge, and you have to work out the logistics and be smart about how you approach it.”

Unlike their laptop-assisted brethren, the Toronto space rockers – who formed nearly 15 years ago – often augment their five-member lineup with guest musicians when performing live, in order to replicate their heavily layered albums.

Perhaps this is why their critically acclaimed new album, Other Truths (Constellation), sounds more “live” than previous releases. Did they deliberately pare back the embellishments in order to come up with a tour-ready record?

“We talked about exactly that for this album, but we’ve been doing things in a certain way for so long that it was hard for us to change our approach,” Benchetrit explains. “And we didn’t want monetary thoughts to affect the outcome. That just didn’t seem like a very artistic or musical way of approaching it.

“It’s hard enough to make a record you love, so there’s no point in adding undue pressure.”

Benchetrit says there was also a deliberate attempt to narrow the band’s scope, which is ever-expanding due to the members’ involvement in a plethora of side projects, including Broken Social Scene, Lullabye Arkestra, the Happiness Project, Years and more.

“We wanted to simplify, and not indulge all the different avenues and ideas that individual members bring. We figured if we didn’t come to the table [set on] anything in particular, we could concentrate on what the five of us create together.

“So we’d just pick a day of the week and get together to jam. In many ways, this idea is at the core of who we’ve been this entire time.”

Ohad Benchetrit talks about how Do Make Say Think ended up collaborating with Akron/Family.

Benchetrit talks about the challenges of running a band that has so many busy side projects attached to it.