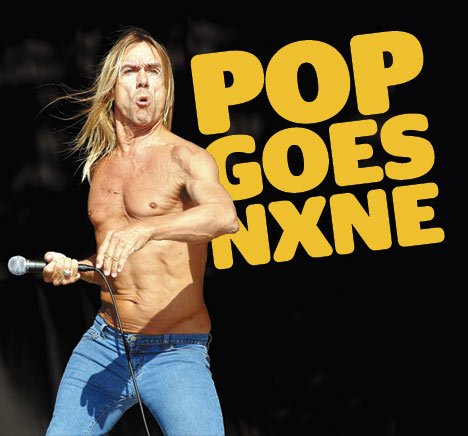 Iggy Pop is steering his sleek Ferrari F430 sports car from the Miami home he shares with his glamorous wife, Nina Alu, toward Miami Beach. He’s running some errands during brief downtime off the road after playing Europe this spring.

“We’re on a break until July and August. The only exception is the outdoor show with you in Toronto, and I’m really psyched,” says Pop of the NXNE gig he and his resurrected Stooges headline at Yonge-Dundas Square on Saturday night (June 19).

Things are sunny in Iggy & the Stooges’ world, and it’s not just the Florida skies that are bright. The band that invented punk rock now sells out bigger shows than they ever played in their early years. The Stooges reunited in 2003 to meet an apparently insatiable appetite for the punk pioneers’ dangerous rock and Iggy’s anarchic athleticism.

And Iggy & the Stooges were finally inducted into the Rock and Roll Hall of Fame in March, with proto-punk protege Green Day’s Billie Joe Armstrong handing them the hardware at the corporate bunfest at Manhattan’s Waldorf Astoria.

“The Hall is a game, and it operates on a lot of levels,” laughs Pop, recalling the night at the Waldorf, when the Stooges’ deranged performance of I Wanna Be Your Dog added to the band’s legend and scared the shit out of the suits in the front row.

“I think they were a little fascinated,” says Pop of the stuffed shirts who stuffed the tables, “a little snake and mongoose thing going on. I just wanted to let them know I was in town.”

He wasn’t just in town – he was in their laps when he jumped off the stage and stormed through the crowd trying to incite the expense-account set.

“I had done the Hall once for Madonna [the Stooges sang two of her songs at her induction], so I knew there’s a hierarchy of those who can afford to pay and who deserve’ to sit in those very front tables. It’s a whole industry power thing.”

While clearly pleased to pick up his prize, Pop has no illusions about the awards.

“The Rock and Roll Hall of Fame originated to honour and make amends to the pioneers of rock who were not educated people and got screwed, to make the industry look a little more human and to ultimately boost sales of the back catalogues. Most important, they set it up to be able to tie all these great R&B artists into an artistic ancestry that you could trace to many of the groups that were making the labels more money.

“So by the time the whole experience was over, I thought, My god, I’m Bo Diddley.'”

“But the Hall is the sort of thing that gets outside the subculture of music lovers. It resonates with the broader public. And because it is an industry thing, you feel a little bit of that I prevailed’ thing.

Industry accolades were unimaginable in the Stooges’ early days. The promising band from Ann Arbor quickly became a headache for label execs who had no idea how to handle the group’s poor record sales and out-of-control live shows.

“The people we freaked out – you know [the Who’s] Won’t Get Fooled Again, Meet the new boss, same as the old boss’? We freaked out the new bosses. In the late 60s there was an alternative hippie infrastructure of pod people or body snatchers that were at every gig. They congregated around the local psychedelic ballroom, the clubs, the FM station and managed the local bands. They didn’t like us, and neither did the top of the industry.

“But the people liked us.”

Pop recalls, “The music was very, very hard-hitting, the lyrics and the way the music was put together daring.”

But the Stooges approach didn’t translate into record sales: bad news for record execs, no big deal to Iggy.

“I’d always thought that was the right amount to sell. I would say, If this is handled right, there might be 50,000 in America.’ I couldn’t even conceive of the outside world yet, who might like this stuff, and that’s fine.

“I didn’t understand the tenets of capitalism. I thought surely somebody could make a little profit selling records like that. We could do shows and we could all live together in a house and eat brown rice, smoke hash and fuck, listen to music and read The Teachings Of Don Juan. What’s the problem?”

Desperate to get a return on its floundering investment, Elektra tried to get Iggy to ditch the band.

“I’d hear again and again, Lose the group. I can get you with some real musicians. You’re cute and you’ve got an interesting act.'”

Pop says he pushed his band to new extremes for the Stooges’ second album, Fun House, but the release sold only half as well as the first. The label never did formally drop the band, but did try to get Pop to sign what he calls a boy band deal.

Instead, he got introduced to David Bowie, who encouraged him to move to London. Pop talked the Stooges into joining him and finishing Raw Power, with Bowie doing the final mix.

It sold as poorly as the earlier Stooges releases, and the band eventually collapsed, a victim of corrosive life on the road, addiction and an industry grown impatient with their false starts.

But Pop remains proud of the Stooges.

“We tried to do something that had enough of familiar rock format so that people would pay attention. But – and nobody else had done this – we brought influences from John Cage, Harry Partch, Lebanese belly dancing music, Turkish orchestral music, Bedouin music, slave chants, Balinese stuff and Carl Orff, little touches of all that and jazz.”

Pop says the sleigh bells on I Wanna Be Your Dog were lifted from avant-garde jazz player Pharoah Sanders, and there’s some of Johnny Cash’s I Walk The Line in No Fun.

“I worked in a record store as a stock boy, and I’d often stay late restocking and playing odd records. I wanted to learn. I listened to Balinese music and to those monks who blow those big Tibetan long horns.”

Then Pop unleashes a bellowing blast, an imitation of the otherworldly horns that inspired him.

“I like that music – it’s good shit. I still listen to it. I listen to what people would think is pretty weird stuff, but it gives me pleasure.”

He got no pleasure, however, from watching punk finally take hold years after the Stooges collapsed.

“It was difficult emotionally. I knew I couldn’t go back. I intuited that they were doing things based on what I did, but in a more palatable form, a little more commercialized. New Rose (by the Damned) and God Save The Queen (Sex Pistols) and later some of the early Clash stuff, that’s slicker, a little different.

“And of course they had a smaller, more receptive country to spring it on.

“In America, it’s like trying to wake up a large, wet hippopotamus – no, not even a hippo, something very large, damp and flaccid. And you’re trying to wake it up, and America won’t get a stiffy. It’s very hard to get America behind something, even to notice. In Britain, music is more important.”

Even now, he says, the pasteurization of punk continues.

Punk’s no joke to Pop, as we’ll see when he brings his ferocious show to Toronto.

Iggy Pop reflects on being inducted into the Rock And Roll Hall Of Fame.