Paul McCartney once famously said that, “If slaughterhouses had glass walls, everyone would be vegetarian.”

Premier Doug Ford can attest to that. Ford told me when I interviewed him during the first Ford Fest after his brother’s death in 2016 that he went vegetarian after working in a meat-packing plant one summer, carrying legs of cows around on his back. “After that it wasn’t for me, but there’s nothing wrong with people having a good steak,” he told me.

On New Year’s Day, a group of about two dozen vegans showed up outside Ford’s two-tone beige-and-brown stuccoed Etobicoke home with signs. On display near the front entrance of the Ford abode was a trio of statues – a Santa shushing with a finger over his mouth, a bronze monkey and a second Santa climbing a ladder with a sack of toys overflowing on his back.

The “family-friendly, love-based, lighthearted” block party, as it was dubbed, was organized by animal rights activists to protest the Ford government’s proposed Security from Trespass and Protecting Food Safety Act. Plant-based snacks were served. 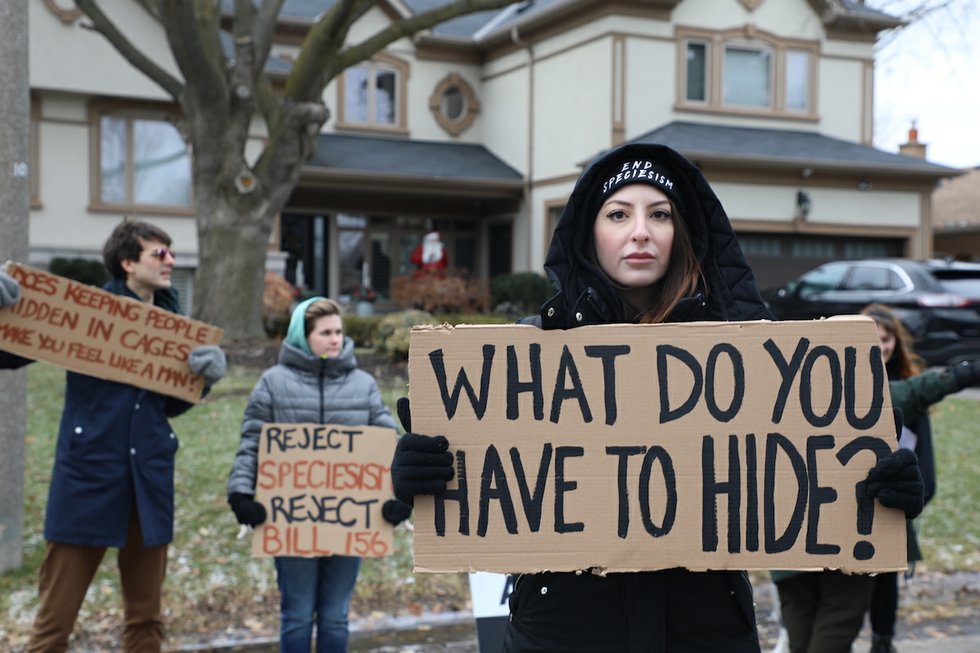 Outside, Amanda St. Clair is on a megaphone. “Animal agriculture is a leading driver of climate change and we should be talking about how to transition to plant-based food systems, but they want to set back animal rights activism and civil liberties.”

The Ford government says the legislation was developed to protect the “biosecurity” of the provincial food supply. The bill also claims to “protect animals from distress” and “contamination.” But animal rights activists call the proposal an “ag-gag law.”

The legislation will punish whistle-blowers for going undercover to film animal abuse on factory farms, set up “animal protection zones” to keep protestors from blocking trucks transporting animals to slaughter and increase fines for trespassing to $15,000 for a first offence and $25,000 for a second offence. 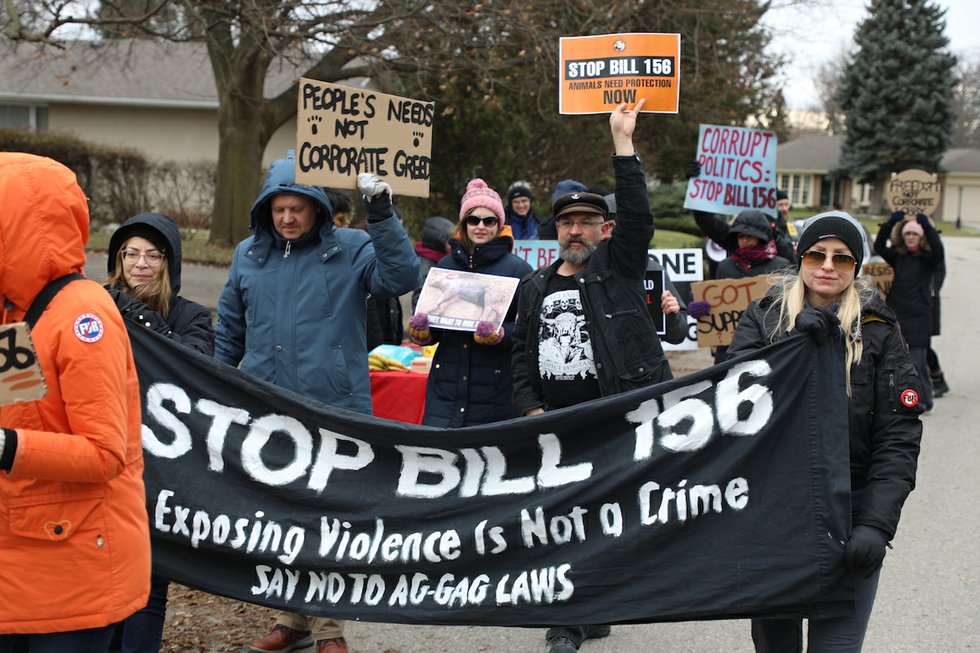 Animal rights activists say the proposed law was explicitly designed to target the work of The Save Movement, which regularly hold vigils outside slaughterhouses in the GTA to bear witness.

The Save Movement’s founder Anita Krajnc was charged in June 2015 with criminal mischief for giving water to a pig arriving at Fearman’s slaughterhouse in Burlington, Ontario. The celebrated case received global attention. Kranjc was found not guilty. And while the trial raised important questions, it failed to address the legal rights of animals.

Animal agriculture lobby groups applauded the Ford government’s move. Ontario Pork, which represents some 1,200 pork producers in the province, issued a statement to say that their members are increasingly “encroached upon by individuals seeking to end their livelihood.”

The group claims that “these invasions put the safety of people, animals and our food supply at risk.” The Alberta government, which has established a special office to target environmental activists opposed to tar sands development, has introduced similar legislation. 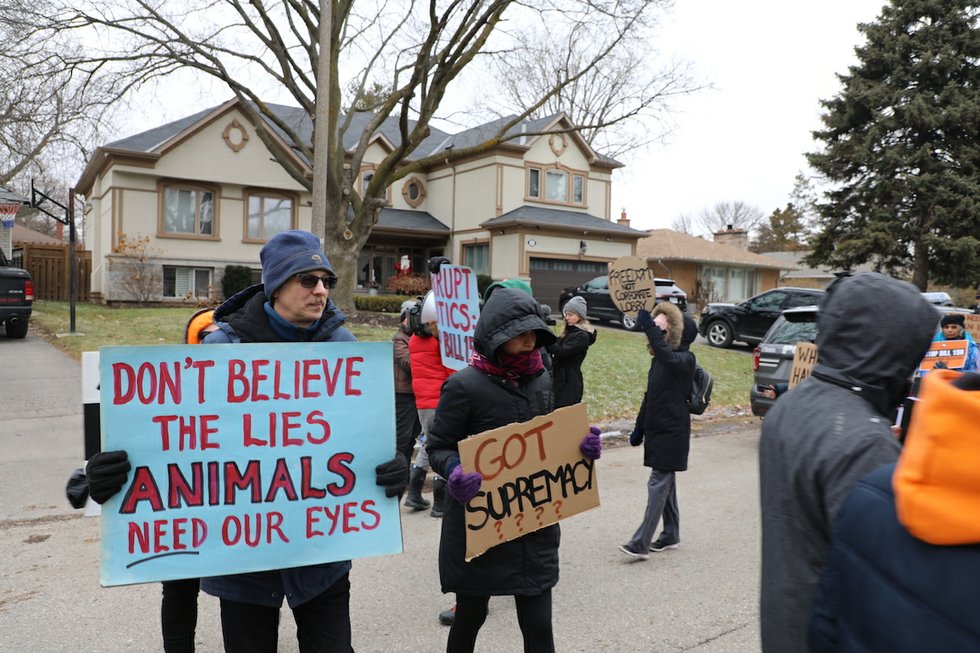 “The bill is concealing what farmers don’t want the public to know about cruelty because they themselves are pressured to produce and output,” says Laila Plavins, another protestor outside Ford’s house.

A few of Ford’s neighbours came out of their houses to check out the protest. None of them wanted to share their name, but this is what they had to say:

Neighbour number 1: “I’m all for the cause, but I don’t support people protesting the premier’s home. It’s crossing the line.”

Neighbour number 2: “Go away, you are disturbing the neighbourhood.”

Neighbour number 4: “He needs a lot of people to go protest his house for a lot of different reasons. Happy New Year.” 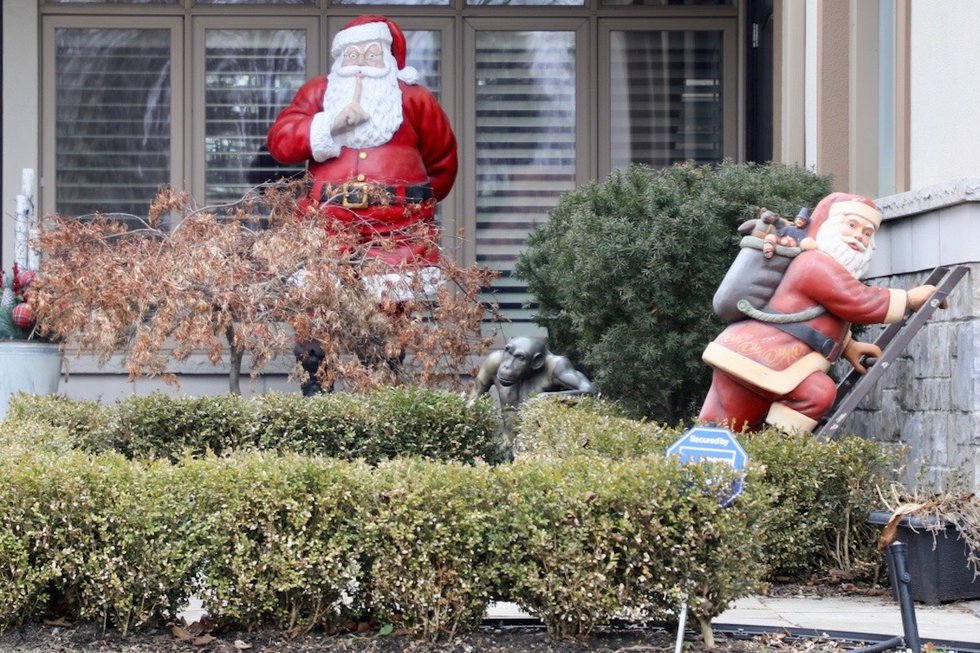