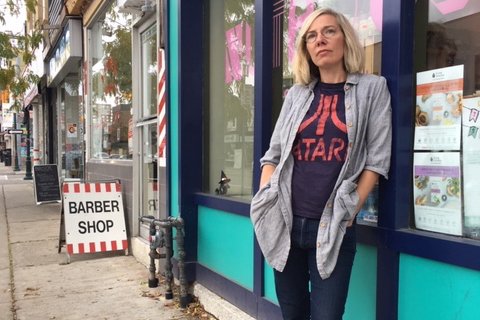 I own a store on Bloor Street, so when a group of researchers from the University of Toronto published a study in August about the positive economic impacts of the Bloor bike lane pilot, I was immediately interested.

My health food store is on a stretch of Bloor that doesn’t yet have a bike lane. But based on this study – and my own observations as a merchant for 10 years – I’m really looking forward to the Bloor lane extension coming to my shop.

This is a difficult time for small businesses like mine. We’re getting squeezed between the Big Box stores and the rise of internet shopping,

However, small independents are important fixtures of Toronto’s neighbourhoods. We offer customers a sense of community. We offer them something that’s local and human-scale. Many Torontonians aren’t looking for huge parking lots nor even necessarily the lowest price. But they do want to feel that local merchants are their neighbours.

This is where bike lanes come in. They help make travel calmer and more sociable. They bring charm to a neighbourhood. And they make our roads feel less like highways and more like friendly main streets.

Many older cities, such as Barcelona and London, are putting more of an emphasis on pedestrian travel and cycling so that folks can enjoy a more intimate experience. They really get to know merchants and merchants get to know them. Customers learn which storeowners are most knowledgeable about, say, cheeses, and which shops have the best fruits and vegetables. Retailers, in turn, become familiar with buyers’ likes and dislikes.

Cycling facilitates all of this.

Unlike motorists, who sometimes shoot past, cyclists move at a more relaxed pace, one that allows them to notice my business and then stop and visit.

I find bike-riding shoppers to be very loyal. Maybe it’s because they have a bit more time on their hands. They may purchase a little less, but they generally shop more frequently.

I’m also fond of cycling because it improves air quality. All the cars and trucks on Bloor mean lots of pollution. In fact, I often have to keep the door of my shop closed to ensure black soot doesn’t blow in. Over time, increased bike ridership will mean easier breathing.

But to get more folks on bikes, we absolutely need to make cycling safer. Lots of people want to ride but don’t because it feels dangerous. Who can blame them? We need protected bike lanes on Bloor, at least to High Park.

Of course, the lanes need to be appropriately designed. And businesspeople should be part of the discussion on what exactly they should look like. Seniors need to be at the table as well. We have to ensure they can cross the lanes safely.

But none of this should be a problem. By consulting local residents and merchants, city staff will be able to design bike lanes that work for cyclists and non-cyclists.

One of the key takeaways in the U of T study is that bike lanes are a good way to protect our climate and air. They also go hand in hand with a great climate for business.

Liza Lukashevsky is a long-time business-owner on Bloor.