Glen Murray talks fast.Actually, Murray doesn't talk, he uploads himself directly to your brain. And these days, the Liberal candidate. 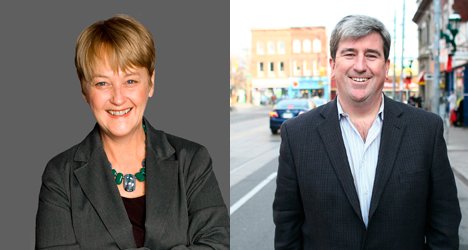 Actually, Murray doesn’t talk, he uploads himself directly to your brain. And these days, the Liberal candidate for the Toronto Centre by-?election February 4 has two favourite topics: Toronto and Glen Murray.[rssbreak]

Such is the man’s enthusiasm that 10 minutes into our conversation, I’ve discovered that 10 per cent of the 32 million square feet of the last decade’s new Toronto offices are near transit, learned more about the history of district energy generation in Toronto than I thought possible and almost forgotten that he’s the one who’s only lived here six years.

Murray arrived in 2004 after losing the federal election for which he cut short a term as Winnipeg’s mayor. Last fall, he began sounding out a run at David Miller’s chair, but by December was acclaimed as provincial Liberal candidate for Toronto ?Centre.

It’s easy to imagine predecessor George Smitherman, now making the same mayoral run, offering the seat just to keep the charismatic urbanist out of the way.

Murray’s done his homework. He sees the riding as a confluence of his cherished issues: economic development, cultural regeneration, green neighbourhoods. But he knows enough to lead – talking to me anyway – with poverty. “Affordable housing,” he says, out of the gate. “We need to accelerate.”

We both know the script. I’m supposed to say that for nearly a decade, activists have criticized his party for failing on that, but he jumps straight to the response (fast talker, remember): “We came into a situation of neglect [after Harris],” he says. He points to the Regent Park redevelopment as the new model. “There is an unprecedented level of investment in affordable housing.”

Cathy Crowe, his NDP opponent, might not agree. I’m standing with her at All Saints’ Church on Dundas, which provides increasingly embattled street services. It’s morning light has yet to seep downtown, and it’s cold. Crowe had hoped we could talk to those using the services, but All Saints is unexpectedly closed.

“This place has kept people alive for years. On a day like this, they would see 300 people. Now people are forced down to Good Shepherd on Queen.” Good Shepherd is overwhelmed, even on a good day.

Crowe, legendary street nurse and poverty and health-?care activist, doesn’t talk very much, but it’s not for lack of something to say. She’d just rather you hear it first from the right person on the front line, and she’s likely to know who that is.

She’s worked in the area for 20 years and is co-?founder of the Toronto Disaster Relief Committee. And when it comes to the Byzantine patchwork of social services – programs and agencies constantly renamed and relocated as poverty comes in and out of political fashion – she has something no communications team could provide: memory.

Crowe points to a three-?storey tower poking above the church roof, 61 units of transitional housing opened in 1987. “It’s the last thing been built around here since.”

An unremarkable alley, a couple of doors down, used to lead to Cornerstone, an emergency women’s shelter shut down in 2006. A tumbledown semi-?detached is Toronto Community Housing. “It was originally a seniors’ building. Now it’s badly in need of infrastructure money.”

An odd symmetry emerges: Crowe works at the grassroots and wants government to meet them halfway. Murray is master of big ideas but prefers that it doesn’t take the province to make them happen.

Under his mayorship, Winnipeg rose out of debt without raised taxes or slashed services. His motto, exemplified by the zoning tools, tax incentives and public-?private partnerships he used then, is “Grow the tax base, not the tax burden.”

Music to the ears of a government wary of raising its own revenue, or favouring Toronto. And he might have provided, given the alternatives, the mayoral race T.O. deserves.

He repeats the McGuinty wisdom that our city hasn’t taken advantage of new revenue freedoms in the City Of Toronto Act. And it’s true. But the developer-?driven renewal of Winnipeg doesn’t seem like a model for Toronto. And has Murray checked his new party’s record on poverty?

“You want to lift people out of poverty, and people do that when they have choices,” he says.

Sure, but the Tories left behind a 40 per cent cut in social assistance in six years the Libs increased it (minus inflation) by only 11 per cent.

Murray says his campaign is about “fighting the Tories,” but with poverty a talking point, Crowe could be a threat – if she can rally support beyond her core to affluent Lib areas in the north. And speaking for Regent Park is one thing getting it to vote is another. But this is a by-?election with low turnouts, a situation that often favours opposition parties.

NDP provincial secretary Darlene Lawson says the social costs of poverty make the campaign relevant. And Crowe’s choice to reframe housing as infrastructure, when infrastructure stimulus is still a dinner-?table term, is savvy.

But if anything has reach beyond the activist world, it’s health care. On McGuinty’s watch, says Crowe, the number of nurses per patient has been dropping, and she attributes the increase in hospital-?acquired superbugs to cuts in cleaning budgets.