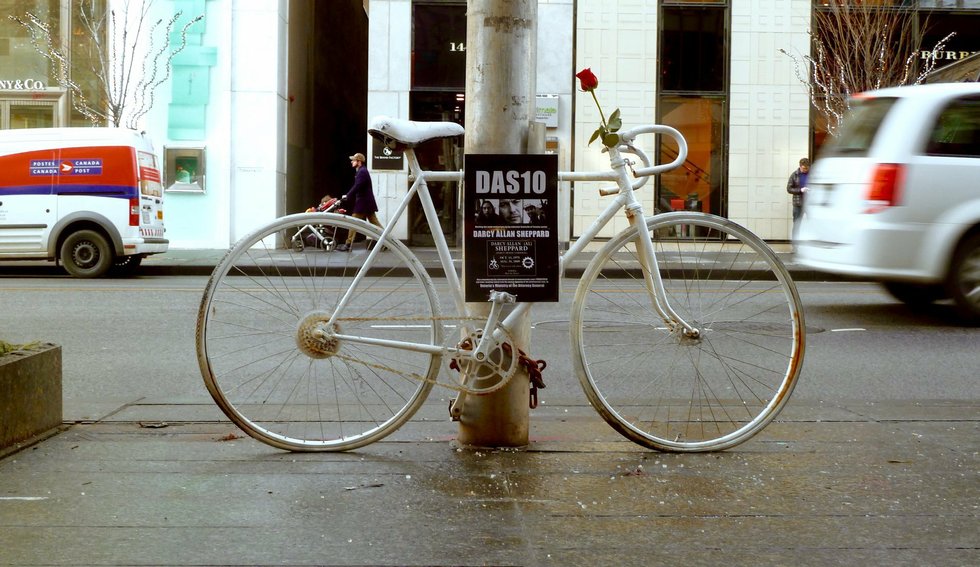 The missing ghost bike which has stood for the past decade on the south side of Bloor just east of Avenue has been returned with a new lock – and fresh coat of paint.

Such ghost bikes are to be found across Toronto, wherever a cyclist has been killed. Members of the cycling community have been installing the tributes for more than 20 years.

This one was more notorious than most. It marked the spot where in September of 2009 bike messenger Darcy Allan Sheppard was killed following a horrifically violent incident involving former Ontario attorney general Michael Bryant. The tragedy was compounded by a controversial decision by an Ontario government-appointed independent prosecutor to drop criminal negligence and dangerous driving charges against Bryant.

Throughout the ensuing years, the memorial has been maintained by Sheppard’s family and their supporters. The memorial has served as the meeting place for semi-annual gatherings calling for a more equal justice system for cyclists killed on Toronto’s roads, and all Ontarians.

It is this history that made the ghost bike’s disappearance such a gut-punch for those of us who have lived through the tragedy.

The City of Toronto and local BIA (which had mistakenly removed the bike several years ago) were contacted to determine if the memorial had been taken away for sidewalk maintenance or some other reasons. Neither was involved apparently.

A quick visit to the site found that the severed lock, which had helped chain the bike to a lamppost, appeared to have been cut with a grinder. The alleged thief had come professionally equipped for the task.

A bit more amateur sleuthing turned up footage from a security camera from a nearby office building. It shows a late model white pick-up (possibly a rental) pulling up to the curb adjacent to the memorial around 3:45 am. The video shows the driver removing the ghost bike, putting it in the back of the truck and driving off.

An official report was filed with Toronto police in the hope that other security cameras in the area might have caught a clearer image of the truck’s license plate. And preparations were being made to replace the missing bike when it mysteriously reappeared on Tuesday morning.

Why would anyone take so much time and trouble to remove a quiet tribute and then return it? The jury is still out on that one.