Doug Ford’s supply side economics creating upheaval in the classroom

As teachers unions begin a second week of rotating strikes, it's supply teaching ranks that have been particularly hard hit by government cutbacks 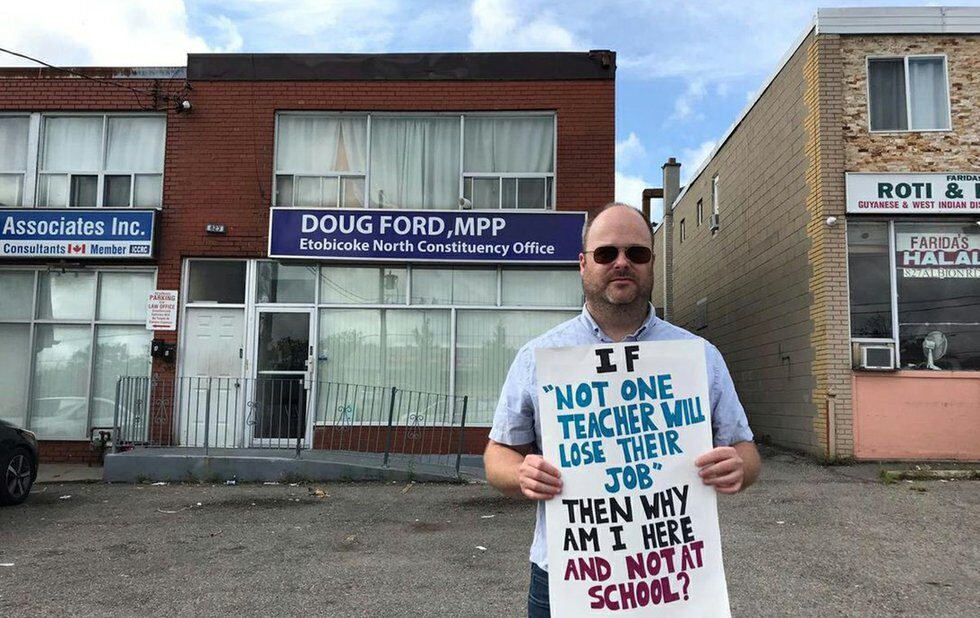 Jonathan LeFresne was declared surplus and let go from his full-time contract after the Ford government announced it was increasing class sizes.

Jonathan LeFresne graduated from teacher’s college in 2013. He worked for a private school for one year before being hired by the Toronto District School Board (TDSB) as a high school supply teacher. LeFresne is qualified to teach English, history, ESL, guidance and social sciences.

Every day for four years, LeFresne got up at 6:30 am to log into the daily supply list online. Sometimes he’d have to wait for upward of an hour and a half for a job. The teaching jobs offered were sometimes not in his area of expertise and could be anywhere in the school board area. This is the reality for short-term occasional teachers working in Ontario.

Then LeFresne got a full-time contract for the 2018-19 school year. But that spring, the Ford government announced it was increasing class sizes and LeFresne was declared surplus.

Despite Ford government assurances that no teachers would lose their jobs over his government’s move to increase class sizes, LeFresne was laid off in August. He managed to pick up some short-term work in September, but that ends at the end of the month.

As the province’s four teachers unions begin a second week of rotating strikes, LeFresne says the Ford government’s cutbacks have created instability and upheaval in the classroom for both students and teachers.

The TDSB is the largest board in the province and increased class sizes, says Paul Bocking, chief negotiator for the Occasional Teachers’ Bargaining Unit of the Ontario Secondary School Teachers Federation – Toronto, have resulted in 120 permanent teaching positions being declared surplus this school year. Bocking says those 120 teachers would normally teach over 700 classes over a year, adding significantly to the availability of courses for students.

But “the minimum enrolment required to keep a course open has gone up significantly,” says Bocking. “Alternately, schools merge classes together (grades and sometimes even similar subject areas) to get around this, but it’s obviously a subpar solution. It will be more difficult for students to take more specific upper-year elective courses that could prepare or qualify them for post-secondary programs.”

Bocking says that supply teaching ranks have been particularly hard hit. It can be an invisible, thankless job. And students often don’t treat supply teachers like they’re “real teachers,” creating discipline issues. Unfortunately, this attitude can extend to colleagues as well. “Supply teachers are generally given the least benefit of the doubt, should anything go wrong,” says Bocking.

Biology and chemistry teacher Sharie Sobers graduated from the two-year Bachelor of Education program at Queen’s University in August 2016. She then took Additional Basic Qualifications for Intermediate and Senior Math.

Sobers began her daily GO commute from Brampton between 5:30 and 6:30 each morning.

“As a brand-new teacher I did what I had to do to get the experience, the references and pay the bills. Sometimes I’d travel up the mountain as far as the Hamilton airport, sometimes Stoney Creek. Areas like Flamborough and parts of Ancaster that aren’t served by transit weren’t accessible to me.”

She eventually landed a one-semester contract position for the 2018-2019 school year and moved to Toronto. But that was short-lived. Her position was declared surplus and she was laid off in August.

According to Robert Wrightman, president of the Occasional Teachers Bargaining Unit – Ontario Secondary School Teachers Federation, the situation is true across all school boards.

In Peel Region, the second largest board in the province, for example, there were approximately 330 long-term supply teachers in 2018. For the 2019-2020 school year that number is down to about 230. That has slowly worked its way back up to 320 after 90 full-time teachers lost their positions, bumping an equal number of teachers into an already crowded short-term supply pool.

Short-term supply teachers can expect to work an average of eight and ten days per month, but the work is not always equally distributed.

They receive the same base pay regardless of qualifications or seniority. It’s not until they have completed 10 consecutive days at the same school, teaching the same courses to the same students, that their pay begins to reflect their qualifications and seniority.

LeFresne observes that, “My constant moving from school to school means that I don’t get to put down roots, build credibility, earn respect and reap the benefits of better behaviour from students. Quite the opposite.”

He says that starting his current job six weeks into the school year is “the kind of upheaval that leads to students acting out and a slower process of getting the classes under control.”

Bocking projects that “there won’t be new permanent teaching positions opening up for at least a generation” and a resulting deficit of course selections if the Ford government continues on its course of cuts.

At publication time, a spokesperson for Minister of Education Stephen Lecce was still formulating responses to questions from NOW for this story. But it doesn’t look like the two sides will be returning to the negotiating table anytime soon.

In a statement released Monday (January 27), Lecce is quoted as saying that the strike actions by teachers are “to advance higher compensation, higher wages, and even more generous benefits.”