As the months' long fight to unionize Foodora employees comes to a head, couriers speak out on the hazards of the job – and why Big Labour must be more militant in defending the rights of precarious workers 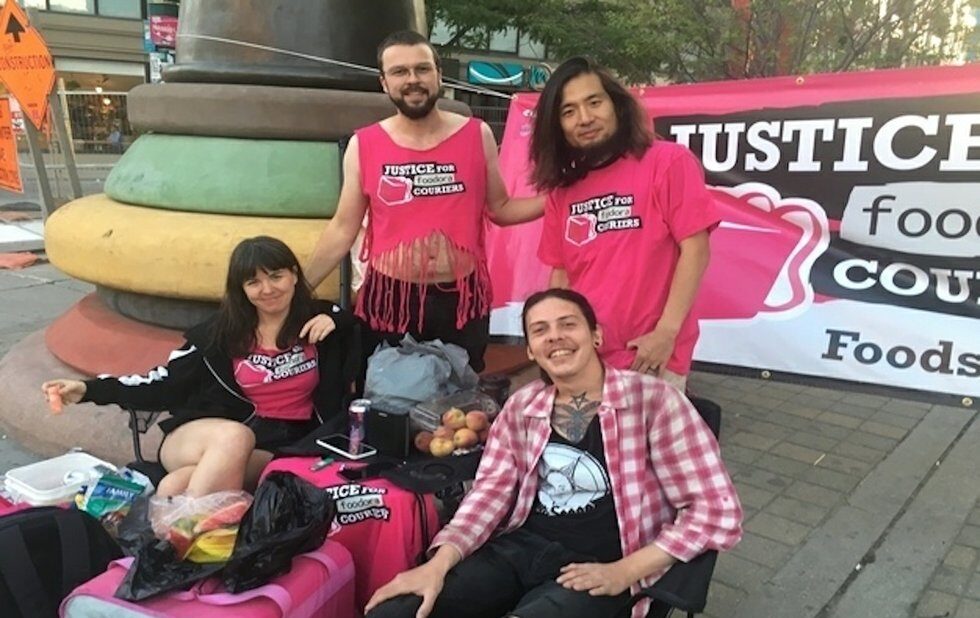 The thimble statue on the northwest corner of Richmond and Spadina that marks the centre of Toronto’s old fashion district is a popular bottleneck for Foodora bike couriers making deliveries between restaurants on Queen West and the dense clump of condos around Fort York.

Last weekend Foodsters United, the Canadian Union of Postal Workers (CUPW) offshoot group that has been organizing Foodora workers, set up an outreach team at that corner. They were there to remind their colleagues to vote yes to a union.

The Ontario Labour Relations Board (OLRB) conducted the vote from August 9 to 13. The ballots won’t be counted until complaints filed by both Foodora and Foodsters United are dealt with by the OLRB.

“We would meet Monday nights at Christie Pits and talk about the job, and everybody felt the same way – that the only real solution to the issues we are all having is to unionize,” says courier and Foodster organizer Alexander Kurth.

With help from the IWW (International Workers of the World, aka the Wobblies), they met and organized for seven months before getting in touch with CUPW.

There was “a brief flirtation” with joining another union, says Foodster organizer Christopher Williams, but CUPW’s reputation won out in the end.

“They’re badass and will go to great lengths to fight for their workers,” says Kurth.

Foodora, the Berlin-based app-driven food service, has made no secret of its opposition to a union.

The company asserts that Foodsters United did not meet the 40 per cent threshold required to go ahead with a vote to unionize.

Meanwhile, CUPW has filed an unfair labour practice complaint claiming that Foodora has made false statements to couriers as part of its Foodora Votes No campaign. The union says the company has been using its app to spam workers with messages in an effort to get them to vote against the organizing effort.

The outreach team were quick to assuage concerns the couriers had.

But outreach team member Kota Kimura acknowledges the pitfalls that can come with joining Big Labour. To get results, Kimura argues, unions must be more “democratic… militant and driven by the rank and file.

“We have to try hard to not create a backdoor deal-making environment,” says Kimura.

“A lot of old guard are afraid of losing what they have already gotten [for workers] and they’re not interested in protecting younger people and newer industries,” offers Ostos.

But, he adds, “CUPW is taking a big step stretching their support for these couriers in Toronto.”

To some like Richard Gravel, a union like CUPW, which represents mostly federal workers, seems like an odd fit. Gravel is a 30-year veteran courier of parcels and envelopes and switched to delivering food a year ago.

“All the guys around my age, experienced ex-couriers, don’t like the union,” he says. “If it was Ironworkers or Teamsters, maybe, but with CUPW we’d be a small focus of their business.”

Gravel points to the CUPW website. “This food drive doesn’t even make their news feed.” He’s right, mostly. What news is there about the unionizing effort can be hard to find.

But Gravel is the only one among 30 or so couriers I interview over three days who’s opposed to a union.

“We are not robots but we are treated that way,” says courier Andre Bermon outside the McDonald’s at Queen and Spadina. (See sidebar below.)

For other precarious gig-economy workers and minimum-wage workers in fast food and retail, the unionizing of Foodora couriers could be precedent setting.

“The next steps are to keep the ball rolling and go unionize the other food delivery companies UberEats, Doordash and Skip the Dishes,” says Susannah Mulvale, another Foodsters United organizer. “By organizing from the ground up, there is the real possibility of changing the unfair ways precarious and minimum-wage workers are treated.”

The push to unionize Foodora workers has the fast food industry on edge.

At a conference this summer organized by anti-union group LabourWatch, A&W restaurant reps said they keep a “watch list” for franchises that are “high risk of unionizing” and warned of the “spillover risks” for their industry if Foodora unionizes.

The health and safety risks associated with the job and the fact that couriers incur lost wages when they are injured are common complaints from workers.

“You see some crazy shit everyday, and the way the actual wage structure is set up, you are incentivized to [ride] way faster than you should,” says Williams.

Technically, they are covered by the Workplace Safety and Insurance Board, but some describe filing claims with the WSIB as a “bureaucratic labyrinth.”

Right now, couriers are not compensated for undue wait times at restaurants when they make pick-ups, or for the time it takes to travel between dropping off food and picking up their next delivery.

Restaurants pay Foodora 30 per cent for each order. Customer pays a $4.50 delivery fee that goes to the courier. Foodsters United says that rate has not increased in three years.

The workers I spoke with voiced concerns that they were not respected or given a say in their work. Others complained of being “dehumanized.” So, are they robots? 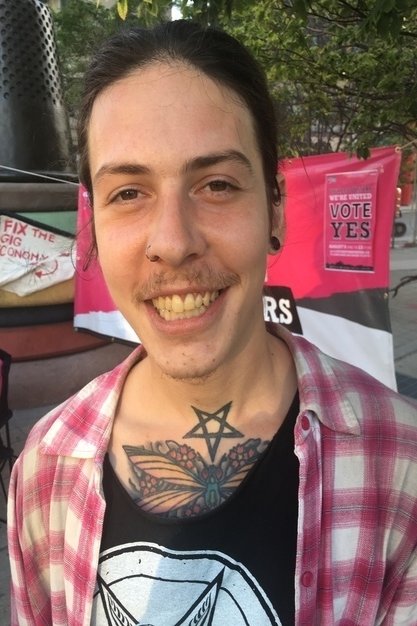 “It would be a nice thing to have some dental coverage,” says Tom Shachar. “I still have a chipped tooth from an accident I had on the job a year and a half ago.” 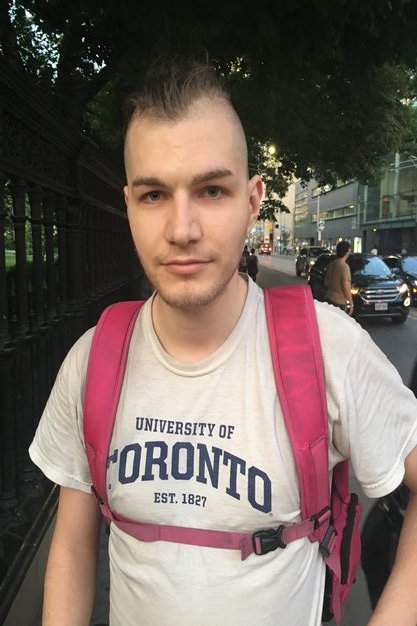 “I voted yes. I would like to see improvements and I don’t think they are going to happen without a union,” says Ben Vass. 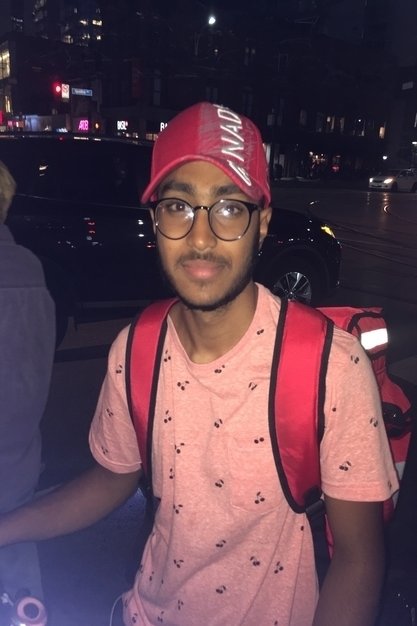 “We get a minimum payment for each order,” says Hussain Ahmed. “The company gets more.” 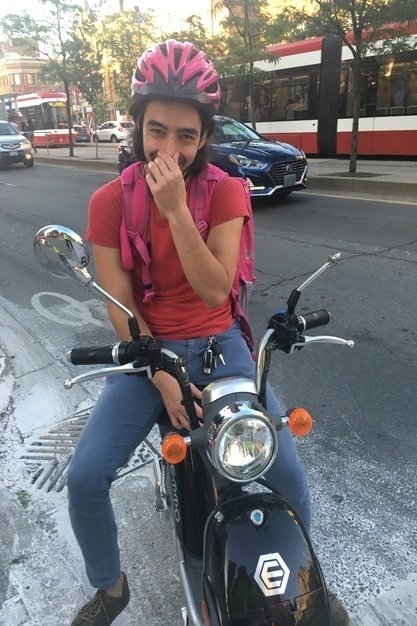 “My bike got stolen so I got a scooter because it’s harder to steal those,” says Yamac Uskan, “but we get no help paying for repairs.” 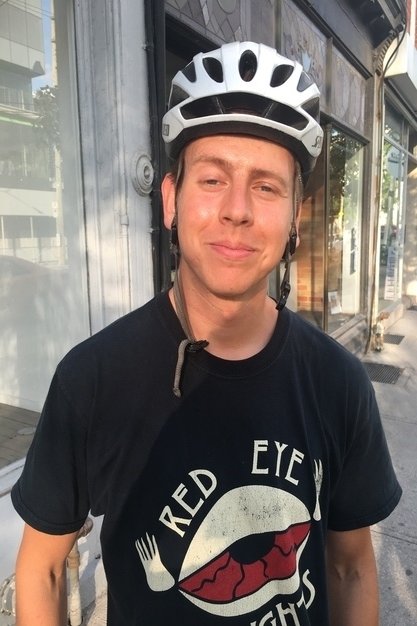 “The worst moments are when it’s raining and you fall off your bike because you hit the streetcar tracks and your bike breaks,” says Sam Tyler. 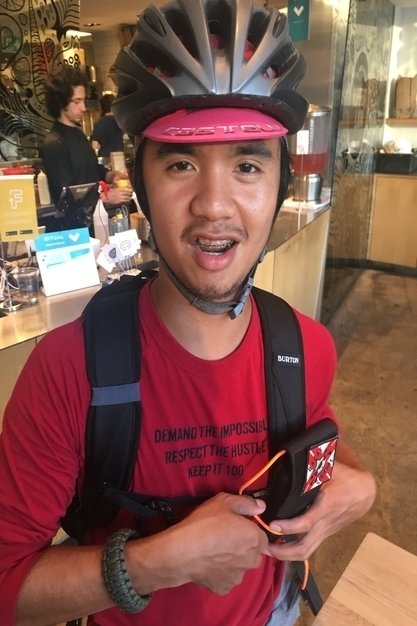 “Some of my friends voted yes, but I am neutral on the union,” says Jezer Bama. “Some couriers think older workers will get more shifts than new ones.” 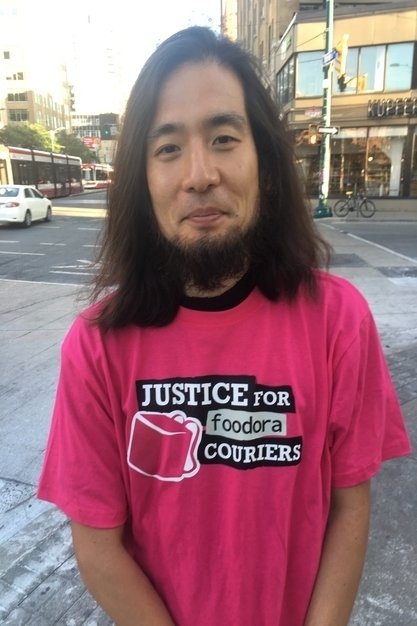 “Delivering to these condos is very alienating because I will probably never get to live in one,” says Kota Kimura. 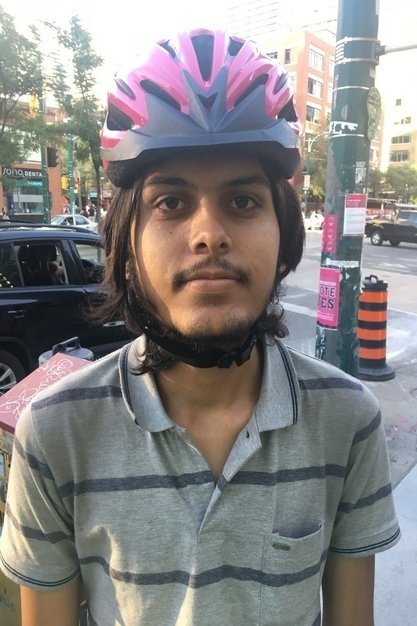 “I want better wages and sick days so we can have time to recover if we get injured while riding,” says Dhruv Gajjer. 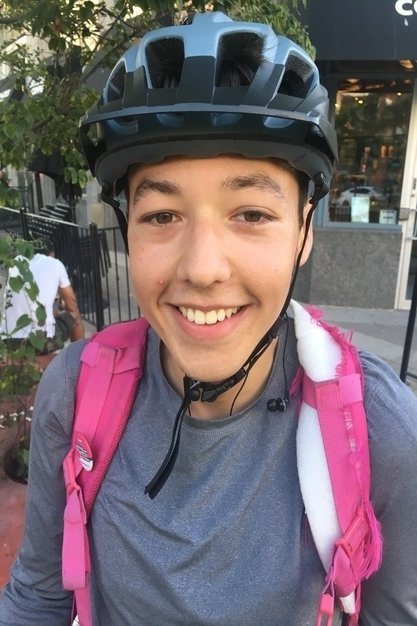 “I have had a lot of shoulder issues from the Foodora bag,” says Desmond Miller. “I want some kind of insurance that covers physiotherapy, and definitely a better courier bag – and some respect.” 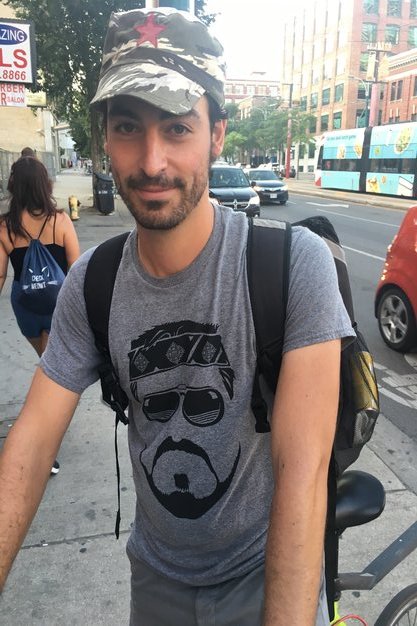 “What do I think the meaning of life is? Oh my god, I mean, right now it’s delivering someone’s sundae from McDonalds,” says Andre Bermon.