NOW MagazineNewsFossil fool on the Hill

Fossil fool on the Hill

It’s sickening, but Canada’s only hope for climate win is shaming the feds on world stage 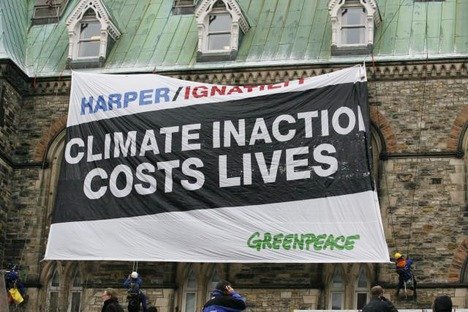 Unless you’re content to foam at the mouth and yell, “Climategate, Climategate” at anyone within earshot, there’s a good chance you’ll be glued to coverage from Copenhagen’s climate change conference over the next week, looking for positive signs that a decent deal’s in the making.[rssbreak]

Will our government continue its sabotage – or get shamed and suddenly shape up? Here are three things to keep in mind as the wheeling and dealing gets crazy:

1. Canada’s a global deadbeat dad – which is why on day one of the conference, activists bestowed on us the Fossil Of The Day award. Environmentalist George Monbiot puts it this way: “Canada’s image lies in tatters. It is now to climate what Japan is to whaling.”

This has everything to do with the feds’ concept of what a clean target is. Ian Bruce, the David Suzuki Foundation climate change specialist, says Canada’s clearly “out of step at the international level because we have not committed to reducing emissions to levels that scientists say are required.” We’re talking a 25 to ?40 per cent reduction from 1990 levels by 2020.

Our feds defend their know-nothing targets, saying they don’t want to be out of whack with the U.S. The land of Obama is only offering a 4 per cent cut from 1990 levels by 2020. Still, the U.S. is out-investing Canadians by six times when it comes to renewable energy. Meanwhile, green Norway leads the charge with a 40 per cent reduction promise.

Environment Minister Jim Prentice said last week that the government won’t buy into summit “hype” and get pressured into a deal. No reason to hurry, of course – it’s just the fate of the world.

2. In the past, the Conservative government has insisted that developing nations should be forced to pay and play on a level playing field. Considering our relative wealth and the fact that 80 per cent of the world’s greenhouse gas accumulation comes from the richest nations, proposals for a scaled target plan that doesn’t overburden poor nations only make sense.

It will be interesting to observe whether Prentice feels the heat at Copenhagen, accepts the principle of “common but differentiated responsibility” and agrees to assist developing nations in lowering emissions. The Pembina Institute figures Canada should be setting aside $2 billion to $?6 billion for boosting green infrastructure in the emerging economies and helping them adapt to warming realities.

3. So much of the pledging relies on peer pressure. Watching how the commitments from other countries stack up could force Harper’s hand. It might be hard to stomach, but our only hope is humiliation.

Then there’s another wild card: public opinion. Despite Harper’s bad showing so far, polls consistently reveal that the majority of Canadians want the feds to lead the pack.

“One big international surprise is how out-of-step the federal government’s position is” with the rest of the country, says Bruce. Canadians are left to place their hopes in provincial governments like those in BC, Ontario, Quebec and Manitoba. Toronto even has an action plan.

So keep your eye on the protests, both here and in Copenhagen. Activist blog sites will be running wild with live reportage of demonstrators’ antics. In Canada, hundreds of local actions – over 30 in Toronto at press time – are set for this weekend. Will all this citizen muscle be enough to move the tar-sands-addicted laggards from Ottawa?