NOW MagazineNewsGay strip on the block

Gay strip on the block

Can Church Street survive the recession and a changing-identity crisis? 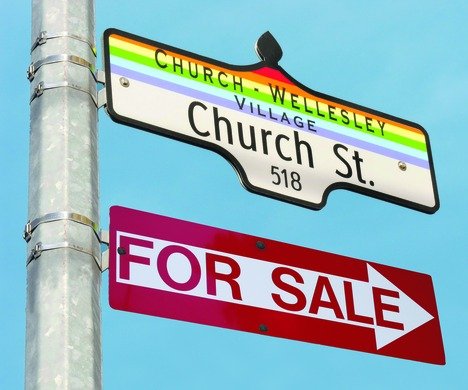 It used to be that when a business died on Church, its vacated space was quickly snatched up and something new sprang to life. Bar 501 became Priape Toby’s became Zelda’s BodyBodyWear became American Apparel and then a Bank of Montreal.

But today there are a growing number of empty spaces in Toronto’s fabled gay village, and a new business opening is about as unlikely a sight as a drag queen in sensible shoes.

Priape’s former space above Sailor and the one-time home of Church Street Diner have both been deserted for months, and a For Lease sign popped up at Zelda’s last month when the camp eatery moved to cheaper digs on Yonge.

Across the street, Il Fornello sits abandoned, as does cabaret bar Statler’s. Also gone from the strip recently are dance bar Crews/Tango and eateries Mamma’s Shawarma Wraps and Veda.

Is this the predictable result of hard economic times or the end of the city’s gay village?

Playwright Sky Gilbert opined in one of the dailies recently that it isn’t just Church Street that’s on the wane. “When being gay is the same as being straight, there’s no need for gay anything. Gay culture as we know it will eventually disappear.”

Sure enough, gaytown is divided between those who blame or the shift in identity politics for the lost venues and those, the downturn.

Some think the magic has gone out of the gay business sector altogether. Ric Tremaine, who shuttered his Cawthra Square Inns on Jarvis in September, says marketing solely to the queer community can be the kiss of death.

“Both the gay community and the general business community have been sold the concept that gay people have oodles of dollars and are continually shopping and spending irresponsibly,” he says.

“Church has generally been the community of broken dreams for LGBT business people who thought their community would support them just because they’re gay.”

Tremaine knew several years ago that his days operating gay-marketed B&Bs were limited. “My research told me that gay travellers were less likely to stay in a gay business,” he says. “This had more to do with generation gaps. The older guys came looking for safety and covert sexuality, whereas the guys of today find safety in the city generally.”

Gay couples have also learned that in most major cities no one blinks when they check in at a chain hotel and request one bed. Ironically, one of the busiest Toronto hotels for queers is the Courtyard by Marriott, just steps from Church. The new generation is willing to overlook the fact that the company was founded by devout Mormon J.W. Marriott and is still partly owned and run by his family.

Councillor Kyle Rae admits the street is evolving, but says things there aren’t so different from the city’s other retail strips.

Church “ain’t special.” “The same [thing] is happening on the Danforth, in the Beach and Bloor in the Annex. Some changes are part of a recession, and then there are some peculiar to Church.”

One of its problems is how to stay attractive to young queers. Parul Pandya, a lesbian who lives near Queen and Dufferin – Queer West – says, “The expression of queer sexuality [in her area] flows more freely than the stricter gay and lesbian binary attitudes that dominate Church-Wellesley.”

Pandya believes Church businesses need to broaden their reach. “As queers, we should know the importance of accepting differences,” she says, referring to advertisements that seemingly pitch to white people and venues that encourage only one segment or another of the LGBT constituency.

Justin Stayshyn, who doesn’t live in the village, says, “Church has got a lot going for it, but it needs to learn not to shrink from its more libidinous traits or businesses.”

And he points out that the younger generation of gays and lesbians are meeting each other online, not at bars or hanging out in the village.

“It’s not just the hookup sites that are keeping people out of the village. We can now find real community online and socialize with others using any number of social media tools and mobile apps. But, “he adds, “there will always be a need for real gay spaces.”

At a time when queers are increasingly looking beyond the borders of the gaybourhood, the Church Wellesley Village Business Improvement Association is spending money to more clearly define those borders. Next summer, two 22-foot illuminated structures will be installed on Church to mark the north and south ends of the village.

David Wootton, managing director of the BIA, says there’s nothing wrong with queers enjoying other neighbourhoods – as long as they spend a few dollars in the village, too. “We need people to keep coming and spending here.” 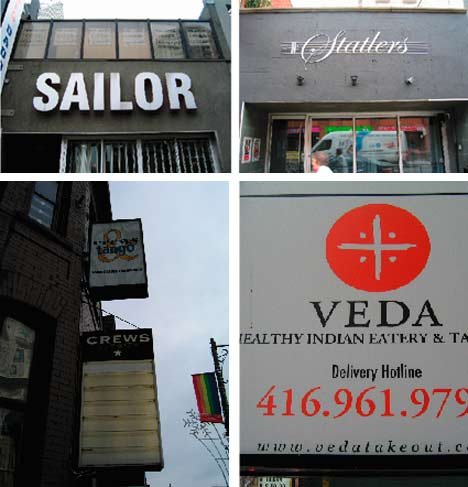 Wootton says high rents are “a big part” of why some businesses have closed. Nevertheless, he feels the strip is still vibrant and has an international profile that will bring in new enterprises. “There will be no problem,” he says, filling the empty spaces within six months. “It’s only going to get better.”

Rae isn’t unsympathetic to business owners who complain about high rents. Because a liquor licence is seen as a licence to print money, he says, property owners have been gouging their tenants. “I think they’ve over-gouged.”

While there’s widespread hope that the vacancies will be filled soon, some worry about timing. Dean Odorico, the general manager of iconic gay bar Woody’s, has seen the comings and goings on Church from his second-floor window at the bar for 20 years. His business is booming thanks to the other closings, but he admits that if new competition doesn’t come soon, revellers may simply avoid the strip.

“If people get down here and we have a lineup, there aren’t as many options to go to,” he explains. “And you’re less apt to come here on special nights like New Year’s Eve if you’re afraid you won’t get in.”

One thing’s for certain – the closed venues are certainly not going to make Councillor Rae rethink the bylaw keeping new dance clubs out of the area. “Nobody wants the entertainment district in the neighbourhood, especially with all the new residential [units]. It’s not going to happen,” Rae says.

The pink carnage isn’t limited to the heart of the village. The Carlton Cinemas – which screened many art house and queer-oriented films – went dark on December 6, and the home of several gay bars (Alibi, Trax) on Yonge north of Maitland closed earlier this year.

Some famously hetero haunts have also disappeared. After 50 years of serving steaks on Alexander Street next to what’s now Buddies in Bad Times Theatre, Carman’s closed for good this summer. In September, Bigliardi’s steak house packed it in after 32 years on Church (replaced by a Pizzaiolo outlet).

A number of one-time Church businesses have found – much like a growing number of queers – that life goes on elsewhere in the city. Zelda’s moved to Yonge, design shop MaZone moved to Jarvis at Adelaide, and This Ain’t the Rosedale Library relocated to Kensington.

Helen Rykens, who’s lived or worked in the village for three decades, sees this as a positive. “If queer businesses are moving a few blocks away, it shows that the community is expanding, not dying,” she opined in an online forum. “The whole city is becoming a more welcoming place to the LGBT community. That’s a good thing.”