Profiting from hate: “Motivational speakers” compete over who has the best sob story

Just before Passover, the director of a Canadian retirees association calls me about a speaking engagement in Florida.

“We don’t have a big budget,” she says. “You’ll fly in the day before, get a sandwich, fly back out. Don’t expect too much.”

This doesn’t bother me. I don’t share my story of radicalization for the money a part of me clings to the hope that I’m making a difference.

But as we talk, I quickly realize that’s not what she has in mind. She doesn’t want me to deliver a workshop on the global rise of nationalism or youth being radicalized by neo-Nazis. She wants a spectacle, a circus freak to entertain her group.

She tells me the choice is between me and a man convicted of a crime he did not commit who had endured decades behind bars. “And prison rape,” she’s quick to add. “The things he lived through!”

Could my story measure up?

Yes, I was a former white supremacist who converted to Judaism after discovering that my father, who died when I was a kid, was Jewish. Yes, I endured severe abuse through my childhood, factors that pushed me into the arms of an extremist “family” that exploited me. But could my shady saga measure up to prison rape?

“If you slept with Nazis, Antifa or even Bill Clinton, put it in your bio,” she adds.

“If you slept with Monica… even better,” she retorts.

Detecting my accent, she asks where I’m from. “Romania,” I tell her, to which she exclaims, “Let me hide my purse!” before breaking into laughter.

I want to snap back, but catch myself. How badly do I want the gig?

We are obsessed with sensationalism, while we trivialize real suffering and squeeze out nuanced discourse in favour of transformational sagas where enlightened victims forgive their abusers. These are the stories that feed the callous New Age doctrine that says we create our own reality and bad things won’t happen if only we think positively. We want our dysfunction framed in Dr. Phil close-ups, followed by hugs and audiences clapping.

But please, not too much horror – no 10-year-old Rohingya girls gang-raped by baby-murdering soldiers or people left to starve in post-earthquake camps in Haiti.  We want just enough trauma to entertain us during evening prime-time, but not so much as to keep us up at night.  If it bleeds, it leads – as long as the bleeding doesn’t force us to justify our First World problems. 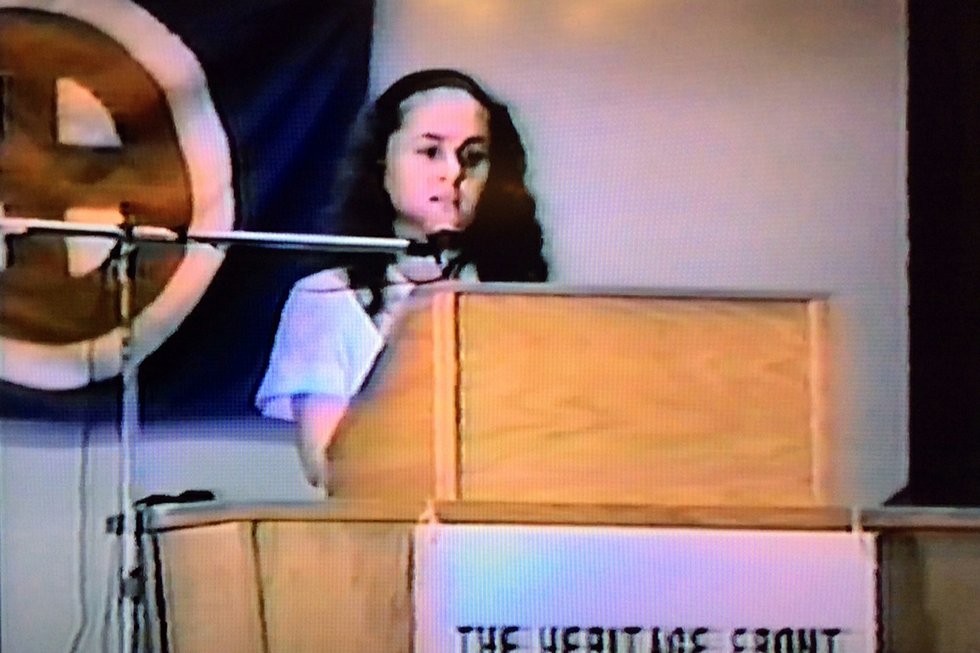 Last year I was hired by a Texas university to share my story. When I got there, the organizers confessed that I was their second choice. Their first – a notorious former neo-Nazi skinhead with his own television special, book deal and “apology tours” in at least three continents – was too expensive: his agent demanded USD $7,500 plus airfare and accommodations for a one-hour talk.

He had not turned over information to police, testified against his former comrades, sent anyone to jail or helped to dismantle a white supremacist group. But it’s “sexier” to see a beefy skinhead repent on stage to thunderous applause than a woman who risked her life as a teenager, but never kicked anybody’s head in.

My average honorarium for speaking about extremism ranges between $0 and $300. You can count me in to undercut those who seek to profit from their hateful pasts. But I wish I didn’t have to. I wish this weren’t a gladiator sport culture where “motivational speakers” compete to outdo each other over who has the best sob story – like the guy who drove drunk and killed someone, the disgraced doctor whose secret drug habit cost a career, the former felon who stomped people with his Doc Martens but is now proclaiming mea culpa all the way to a lucrative book and movie deal.

We diligently commemorate Holocaust Education Week, the Armenian Genocide and Holodomor. We gnash our teeth about historical events we can’t undo and wear red poppies on November 11 to celebrate dead soldiers. But what are we doing about modern-day genocides we might have stopped if only we cared enough to turn off the TV?

But back to my phone call. All of a sudden I catch myself trying to sell this woman on the fact that my childhood abuse was atrocious enough to go head-to-head with the prison rape guy. Then it hits me.

I was 16 years old when I first stepped up to a podium and a crowd of neo-Nazis cheered me on as I raged against the world. Years later, it occurred to me they were like sin-eaters, vicariously feeding on my darkness: the more I hated, the more they loved me.

Without our thirst for spectator sports and vicarious suffering, former neo-Nazis would never become rock stars who earn tens of thousands from transforming brutality into commodity.

And the media would not devote glossy features and television specials to people whose lives are steeped in hate, telegraphing the message that you too can become a violent neo-Nazi and profit from it afterwards.

I decide to let prison-rape guy have the Florida gig. With any luck he’ll be able to dip his feet in the ocean before the satisfied audience, engorged on cheap thrills, sends him packing.

Elisa Hategan is an author, public speaker and journalist. Her memoir, Race Traitor: The True Story Of Canadian Intelligence’s Greatest Cover-Up, was published in 2014.