The RCMP charged an alleged incel attacker with terrorism, but advocates for sex workers' rights say that it distracts from real safety issues affecting women in the industry 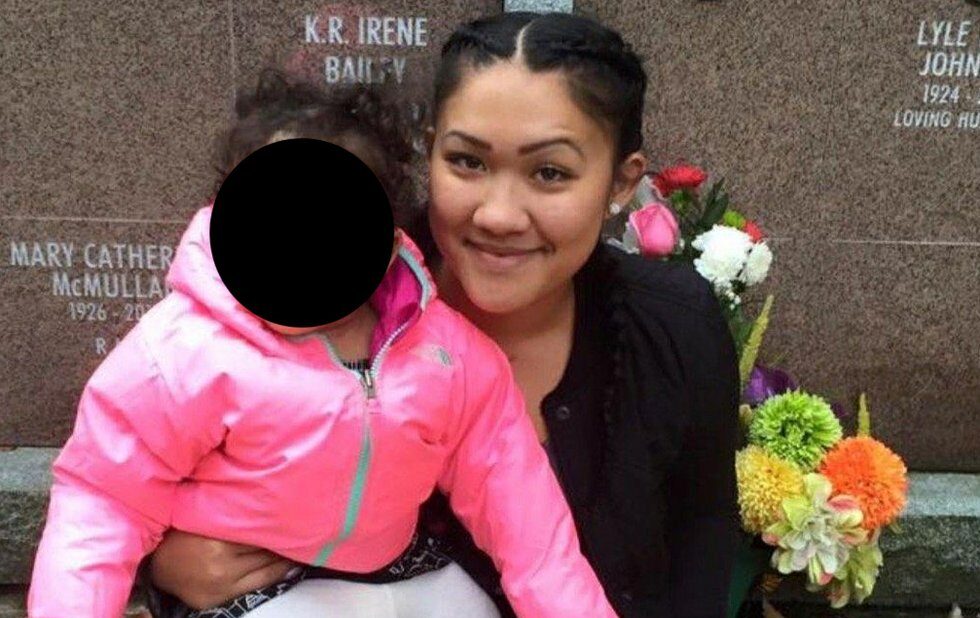 24-year-old Ashley Noelle Arzaga in a photo posted to a GoFundMe page raising money after her death.

At first glance, the terrorism charge laid in the murder of a Toronto massage parlour worker looks like a progressive step.

On May 17, the RCMP charged a 17-year-old accused of stabbing a woman to death with a machete inside the Crown Spa with first-degree murder – terrorist activity.

The victim was identified as 24-year-old Ashley Noelle Arzaga. The parlour owner and another man were also injured in the February attack.

Police allege he carried out the murder in the name of the “incel” movement, the misogynistic but loosely defined online group of “involuntary celibates” who post in online forums Reddit and 4chan.

The arrest has captured international attention, but sex worker advocates say that while the RCMP is making a show of the case, the government is evading practical change to protect sex workers – namely, by decriminalizing their occupations.

“We still have a whole matrix of criminal laws that make their existence and their work more precarious and less safe,” Matthews says. “Focusing on the terrorism part of it distracts us from the much more internally contentious question of criminal law around sex work.”

Matthews, an assistant professor at York University’s Osgoode Law School and co-director at the Jack and Mae Nathanson Centre on Transnational Human Rights, Crime and Security, is not the only one who believes that it’s government policy that has put sex workers at risk and that changes to laws regulating the sex trade would do more to protect those in the industry.

Channelle Gallant, fundraising director at Butterfly: Asian and Migrant Sex Workers Support Network, says, “I have been working with and advocating alongside migrant sex workers for years now and none of them have ever expressed the need for the protection from a federal counter-terrorism unit. But they have been very clear about the need for better labour and human rights protections in their workplaces.”

The suspect, who remains unidentified because of his age, was initially charged by Toronto police with first-degree murder and attempted murder. On May 19, the RCMP announced that both the first-degree and attempted murder charges would be augmented to include terrorist activity because the accused was allegedly inspired by the incel movement. It’s the first violent act in Canada to be tried as terror-related without being jihadist connected in any way. And as far as experts know, it may be the first globally.

These are charges prosecutors didn’t even bring to Alek Minassian, the suspect in the 2018 Toronto van attack who has described being inspired by the sexually frustrated incel community at great length with investigators and wrote a post on Facebook pledging allegiance to Isla Vista killer Elliot Rodger in a war against “Chads and Stacys” (tall men and attractive women) before his attack.

“It seems like there is a kind of shift happening to say that terrorism is not just done by brown people,” says assistant professor Amarnath Amarasingam, an assistant professor at Queen’s University and an associate Fellow at the International Centre for the Study of Radicalization. Amarasingam explains how groundbreaking these charges are.

It was only last year that the Canadian government officially added neo-Nazi group Blood and Honour and their armed unit Combat 18 to its official list of outlawed terrorist organizations on the Public Safety Canada website.

Incels have yet to make that list “ because it’s not entirely clear what that is or if they are a coherent organization or just represent a free-flowing set of ideas,” says Amarasingam, pointing to the hazy distinctions that define so-called “involuntary celibates.”

But even without the listing as a terrorist group, “they decided to charge it as a coherent ideology.”

According to Amarasingam, Arzaga’s murder is the fourth reported attack in Canada where the suspect claimed to be inspired by incel ideology. All have taken place in the last four years.

Misogynistic violence like the 1989 Polytechnique massacre in Montreal cannot be retroactively categorized as incel-related, even if incel communities are retroactively hailing the anti-feminist killer Marc Lepine as an icon.

But, as far as Amarasingam knows, Arzaga’s murder represents the first time inspired by incel ideology that has been related to terrorism anywhere in the world. (The only other incel related terror charges we know of were brought against a Colorado’s Christopher Wayne Cleary, who was prosecuted for making threats.)

Prosecutors avoid bringing terrorism-related charges because they unnecessarily add to the burden of proof. Building a case with evidence to prove the ideological motive in court can seem like a waste of resources when the defence attorney can easily tear apart such arguments. For prosecutors, trying someone like Quebec City mosque shooter Alexandre Bissonnette for murder is a guaranteed guilty that will send him to prison for life, nevermind whether he represents a terrorist threat to Canadian Muslims.

Amarasingam adds that it takes extra motivation to bring terrorism-related charges, and that usually has to do with politics and optics and how Canadian communities feel about how law enforcement treats these kinds of attacks.

Prosecutors usually “don’t care that a bunch of brown people in Scarborough get their feelings hurt that this guy wasn’t charged with terrorism,” Amarasingam explains. “That’s not really our objective.”

Matthews, who believes this moment has been building since the Toronto van attack, calls the charges “a political decision,” noting that in such cases it’s up to the Attorney-General to sign off on them.

But beyond just optics, Amarasingam says the new charges will have a practical effect, including new investigative protocols and funding for research. Even before the recent charges, Public Safety Canada invested $2 million into incel research.

“Once you start charging people for terrorism, the government apparatus also responds,” says Amarasingam. “The funding for research and counter-radicalization programming in public safety all get activated. [These groups] get approached differently by CSIS and the RCMP. They become interesting from a national law enforcement perspective to the extent that a killing in a massage parlour wouldn’t be if it wasn’t painted with a terrorist brush.”

Gallant offers that incel is just an extreme version of patriarchal ideas, an entitlement to sexual access that every woman deals with, whether it’s on the street or the workplace.

Butterfly founder Elene Lam adds that such entitlement is also a factor in domestic abuse situations.

But as widespread and indiscriminate as misogynistic attitudes and violence appear to be, Lam says there remain very specific danger sex workers face because they are criminalized by the law and have no access to its protections.

“Why do people choose sex workers as targets? Why do serial killers target sex workers? Because they know that they are the most vulnerable people. Criminalization promotes discrimination against sex workers.”

Two years ago, Butterfly in concert with organizations like the Coalition Against Abuse By Bylaw Enforcement and Maggie’s Toronto Sex Workers Action Project produced a report after surveying Asian holistic practitioners.

More than half surveyed answered that by-law enforcers “have been abusive, oppressive, or humiliating.” Some 12 per cent alleged they were “physically or sexually assaulted by law enforcement officers” and 65 per cent reported that their biggest concern working in their trade was law enforcement.

“Law enforcement is the biggest terrorist [for sex workers],” says Lam. “They are the people who target them and use the law to oppress them.”

Butterfly, Maggie’s and others also signed an April 2019 submission to the City Of Toronto’s body rub parlour and holistic centres by-laws review. Among 16 recommendations in the submission are proposals that would give employees more autonomy, like the ability to be licensed as individuals and accept payment, and offer more protection, like locking doors.

“We have gone to city councillors to demand changes that would have made Ashley Arzaga’s workplace safer,” says Gallant. “They have rejected and refused those. Instead, we’re being offered these terrorism charges, which do not address the actual needs of women in massage parlours. It’s a complete dodge by the government.”

Amarasingam is not convinced the terrorism distinction should apply to what Matthews describes as “an amorphous and often disconnected online subculture.” Despite the troubling escalation in violent attacks, Amarasingam says that incels often pose a greater threat to themselves than the general public.

“A lot of these individuals suffer from depression, loneliness and suicidal tendencies,” says Amarasingam. “The kind of support that they need is not necessarily going to come from law enforcement. It’s going to come from mental health professionals and social workers.”

He echoes sentiments expressed by Matthews, who leans towards more restorative justice than criminal law based solutions that can often exacerbate problems. For instance, Matthews suggests that labelling incels as terrorists can further entrench them.

Matthews also points to the Omar Khadr case as an example of how easy it is for Canada to flip-flop on its stance when it comes to terrorism specifically so-called “terrorism” committed by minors.

“On the one hand you got this 15-year-old who is accused of terrorism globally,” says Matthews, describing the complicated battle over Khadr. “Finally, Canada takes the position that he was a child soldier and therefore a victim, not a perpetrator.”

Matthews admits that it’s not a perfect analogy but the point stands. Three years after paying out $10.5 million to Khadr for not recognizing his legal protections as a minor, our government is once again wading into murky waters by charging a minor with terrorism. Matthews questions whether there’s any principled reasoning to treat the cases differently.

“From the perspective of radicalization, there are really important questions to ask about agency and malleability of youth in terms of their commitments to all sorts of things.”

Matthews’s skepticism goes further. She’s concerned about the invocation of the terrorist label, especially because it’s so susceptible to partisan politics while being used to justify surveillance, intense policing and U.S.- based Patriot Act-style impositions on civil rights.

“We as liberals are wary when the terrorism label is used to justify surveilling Islamic groups and scoff when conservatives tried to use the label on Wet’suwet’en protestors, but now all of a sudden, when it comes to incels, terrorism becomes very attractive,” says Matthews.

“Framing [a crime] as terrorism actually is the threat,” says Lam, who is just as wary about governments invoking that label.

“Any kind of motive can be framed as terrorism. The power of the state can be unpredictable. We don’t know how they will use it.”