As climate deadlines near and politicians dare to mention fossil fuel bans, the need to ruthlessly defend Big Oil's sunken costs in the tar sands has put Alberta on a war footing – welcome to the petro-state 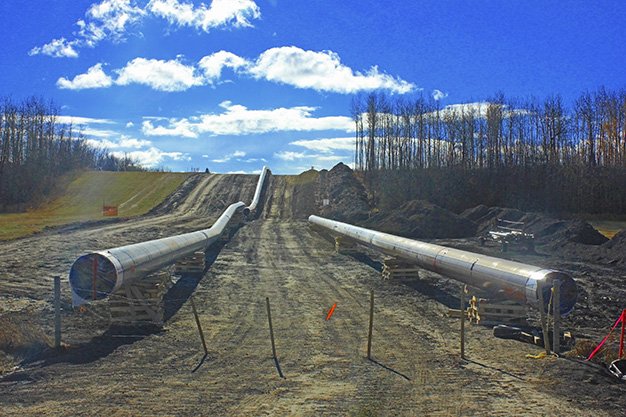 Alongside the recent surge in environmental activism in Canada and growing public concern over the effects of climate change, a potent countervailing force is emerging under recently elected premier Jason Kenney in Alberta: a pro-pipeline police state.

Alberta’s United Conservative government is already aggressively restricting political discourse to guard the fossil fuel industry’s privileges. Kenney has launched a $30 million “war room” tasked with silencing “the green left” and what he has elsewhere referred to as “foreign-funded radicals.” His government has also announced a $2.5 million inquiry into an alleged “foreign-funded defamation campaign” against Alberta oil.

He’s done this in the name of preserving oil industry jobs, even while introducing a litany of anti-labour measures (such as lowering the minimum wage for minors and slashing taxes) that are predicted to cost tens of thousands of jobs. Alberta already has the highest economic inequality in Canada.

The actions of his government escalate existing authoritarian tendencies within Alberta’s petro-state, which has manipulated public opinion to suit industry needs for decades. In addition to the industry’s private security teams, CSIS and the RCMP have a long history of monitoring and harassing environmentalists.

The tar sands are among the planet’s last major oil reserves, a bulwark for the energy sector’s profits. As climate deadlines near and politicians dare to mention fossil fuel bans, the need to ruthlessly defend the industry’s sunken costs in the tar sands has only increased. A small and increasingly desperate minority is sharpening its weapon, and Kenney’s government is the blade.

Nevertheless, as opposition to Alberta’s “unconventional oil” grows, a Canada-wide political trajectory in favour of heeding the whims of the fossil fuel industry persists.

While the Trudeau government contravenes earlier election promises to get rid of oil subsidies, Conservative leader Andrew Scheer’s assurances about “getting pipelines built” threaten an even more fanatical petro-state.

The fact that BC’s Green-NDP coalition would give tax breaks for LNG Canada’s natural gas project shows that no government, however ostensibly progressive, is safe from the fossil fuel industry’s grip.

Canada’s petro-state appears to accord with the democratic ideal, at least at first glance.

If democracy is understood very narrowly to mean popular support (whatever the underlying circumstances), then pro-oil governments can certainly claim a kind of democratic mandate.

Although Canadians are worried about climate change, polls indicate that a majority support the Trans Mountain expansion, and nearly 60 per cent of Canadians consider the lack of new pipelines a “crisis.”

But such polls fail to show that fossil fuel has democratic backing in any meaningful sense. The dominance of pro-pipeline attitudes rather represents the industry’s total control, not only within the halls of government, but the minds of Canadians as well. The idea that the industry represents large benefits for the Canadian economy overall is taken for granted as common sense.

But beneath the energy sector’s fictions, there’s a simple truth: the fossil fuel industry has an intrinsically undemocratic mandate, and that’s the destruction of the planet for the benefit (mostly) of a few executives. The recent actions of Kenney’s government has made that choice clearer than ever.