KKK marching again in the USA

As a secular Jew, I never felt I had much to fear in terms of hate crimes until I saw the swastikas flying in Charlottesville 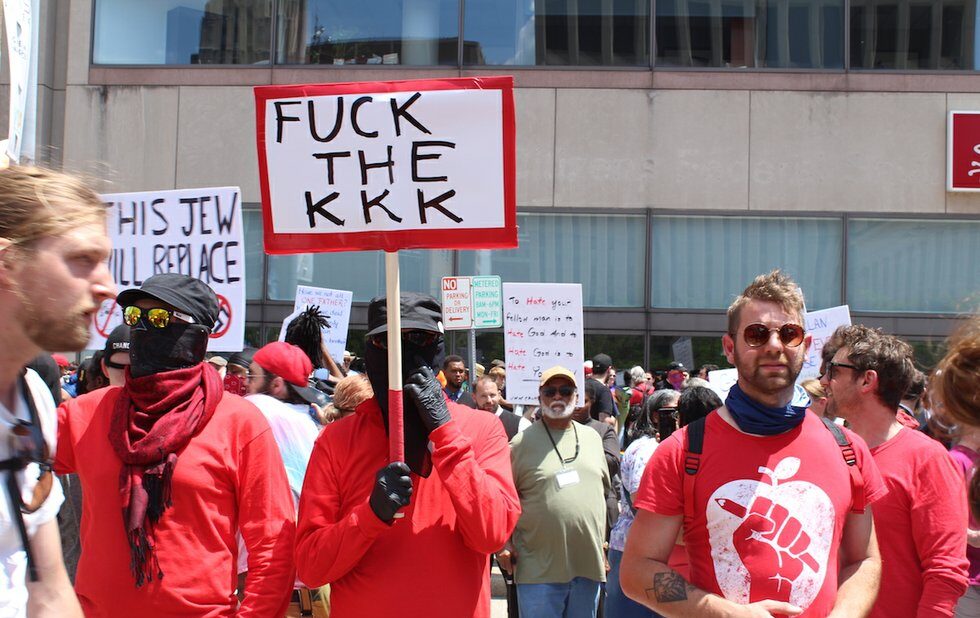 DAYTON, OHIO I feared it would be another Charlottesville, the 2017 “Unite the Right” protest that saw white supremacists and neo-Nazis march through the Virginia city openly waving flags with swastikas and chanting “White lives matter” and “Jews will not replace us.”

The city was clearly unprepared for the violence that broke out that day with one white supremacist ramming his car into a group a counter-protestors, killing local activist Heather Heyer and injuring 19 others. The event shook the nation.

It would turn out that the worst thing to happen to me at last Saturday’s (May 25) rally of the Madison, Indiana chapter of the Ku Klux Klan in Dayton, Ohio was a fairly bad sunburn in the 30-plus Celsius heat.

The group had successfully sought permission to be masked and armed but only nine members showed up.

Police, however, were not taking any chances, confining the Klansmen behind two-metre-high steel fences set up to keep some 600 counter-protestors a good 50 metres away.

The Dayton chapter of the Southern Christian Leadership Conference, or SCLC, a group established in the civil rights era and led by the Reverend Martin Luther King Jr., helped organize the counter-protest under the umbrella group, A Better Dayton Coalition. Others in the coalition included chapters of Black Lives Matter and The New Black Panther Party, who notably have been disavowed by members of the original Black Panther Party and cited by the Southern Poverty Law Centre (SPLC) for anti-Semitic rhetoric.

The boisterous crowd, including several tuba players and hymns sung by the fundamentalist Church of God, drowned out whatever racist slogans the KKK were shouting.

Many concerned citizens not affiliated with any organization also came to confront the KKK. I saw several rainbow flags and a wide variety of signage, ranging from peace symbols to a placard that read Fuck the KKK.

For one of the most segregated cities in America, it was an impressive sight to see. One shirtless young man in particular caught my eye – This Jew Will Replace You was painted in red on his torso. 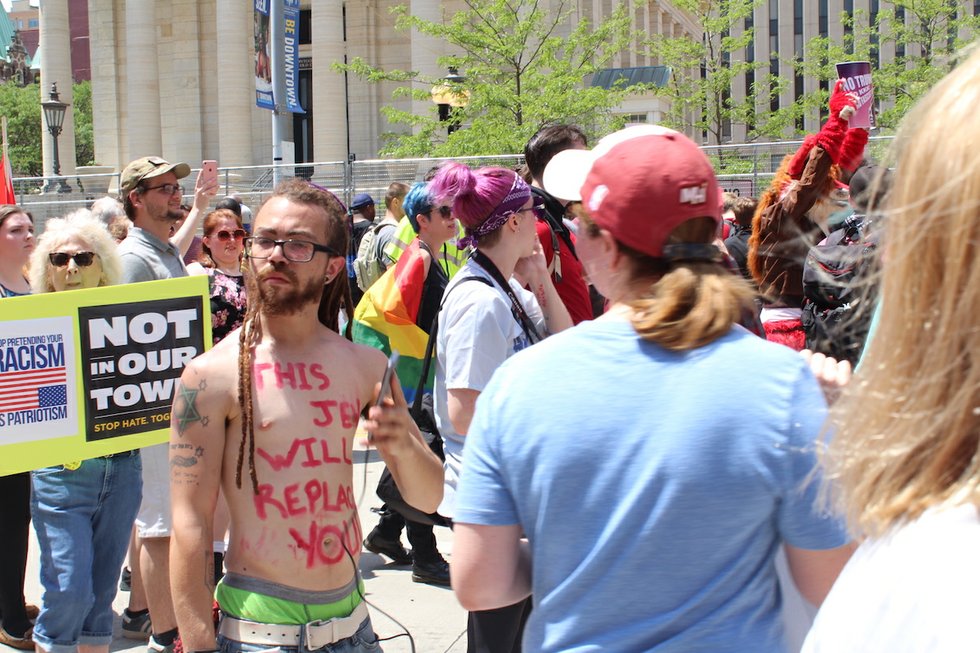 In 2015, a year before I moved from Toronto to Columbus to attend Ohio State for graduate school, Jeffrey Goldberg chronicled the rise of violent anti-Semitism across Europe in an article in the Atlantic which posed the question, Is it Time for the Jews to Leave Europe? I remember thinking, “Thank God, I’m somewhere safe.”

My grandfather who emigrated to America to escape the pogroms, was certainly safer, although there was a lot of hatred directed at that post-war wave of immigration, which included Ashkenazi Jews, as well as Italians and Poles. It’s not unlike today, only the targets of hate are mostly Muslims and migrants from Central America.

But Jewish-Americans had been assimilated into white culture since my grandfather’s youth – or so I believed. We are, for all intents and purpose, white.

As a secular Jew, I’ve always had complicated feelings about my identity. What’s a Jew, exactly? I don’t have a clear answer for that.

But I never felt I had much to fear in terms of hate crimes until I saw the swastikas flying in Charlottesville – and Donald Trump declare that there were “fine people” among them. And then a little over half a year ago, a white nationalist walked into a synagogue in Pittsburgh with an AR-15 and killed nine people, injuring several others.

More recently, a white nationalist shot up a synagogue just outside San Diego on the last day of Passover, killing one of the congregants and injuring a handful of others. The attacker said he was inspired by the Pittsburgh synagogue shooter as well as the mosque massacre in New Zealand.

These are, on the one hand, lone gunmen, but they also engage in online communities like 8chan in which racism and anti-Semitism are endemic and hate crimes are encouraged and celebrated. There are a lot of people on these sites and some are clearly emboldened in the Trump-era to act on their hatred.

I am privileged. I do not fear the systemic violence that people of colour face every day in this country. I don’t wear anything that would identify me as Jewish, although I sometimes attend progressive synagogues on the high holidays to connect to my cultural roots.

I may skip it this year – if I am still in America. 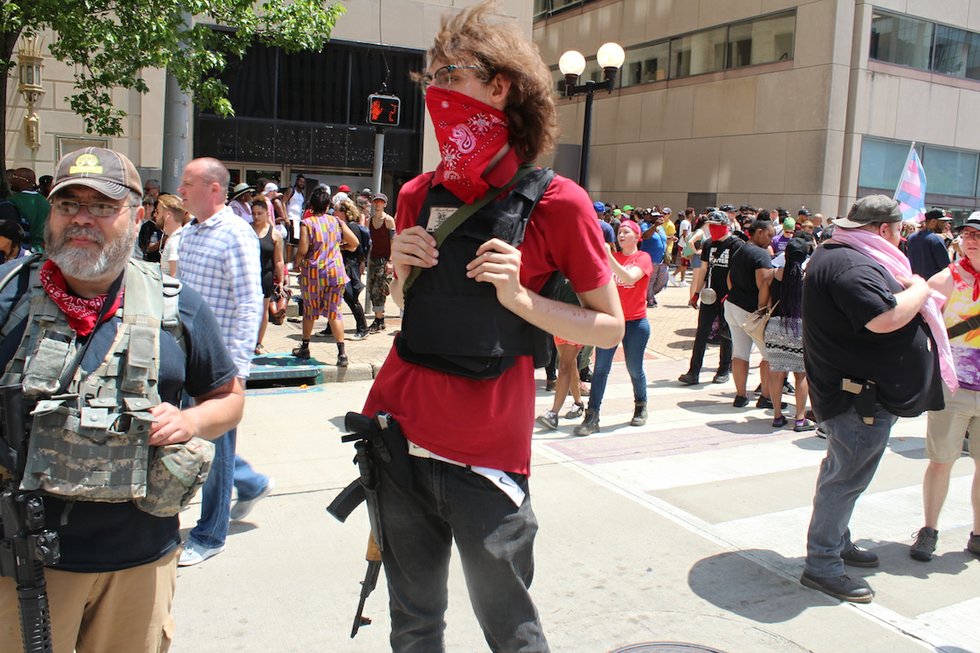 There was a wide range of opinion about the best way to approach the KKK’s rally. Dayton Mayor Nan Whaley advised the city’s residents to ignore it.

The Dayton chapter of the National Association for the Advancement of Colored People hosted a “family-friendly community celebration of love, peace, unity, and diversity,” a few miles from downtown.

But the counter-protestors at the fence clearly thought it was important to be there.

“The only way to shut down the far right… is to actually show up and confront them, outnumber them and deny them the publicity and reach that they’re looking for. They’re looking to grow, and we’re going to stop that,” said Corey Andon of the Dayton chapter of Democratic Socialists of America.

Arthur J. Jipson, a professor of sociology at the University of Dayton who studies hate movements, including the Klan, notes that Dayton was most likely not chosen at random – this was the site, a little less than 100 years ago, of one the biggest KKK rallies in history.

During the 1920s and 30s, he tells me, the KKK had approximately five million members nationwide. “What we might call the Ku Klux Klan’s period of legitimacy,” Jipson says, arrived at a time of increasing social change in America. And it was during that time that the KKK expanded their hate beyond African-Americans to Jews, Italians and other new immigrants.

Today Dayton is also ripe. Montgomery county, like many others in the Midwest, voted for Obama in 2008 and 2012, but turned to Trump in 2016.

From the Klan’s perspective, Jipson says, Dayton is “losing its image as a wholesome midwestern American city.”

White says Trump in his rhetoric and anti-immigration policies has made white supremacists feel comfortable about “being vocal and visible in their fascism and so I do believe it is a wake up call we need to be aware of and we need to confront every time we see it.”

Professor Brian Levin, director of the Center for the Study of Hate and Extremism in San Bernardino,  which collects data on hate groups and hate crimes, says the U.S. experienced more hate crimes in the month following the 2016 presidential election than at any time since the first anniversary of 9/11.

However, since Charlottesville, there has been a significant decline in hate rallies in the United States. It appears that outnumbering and shouting down white supremacists through organized, non-violent counter protests has proved a successful tactic when it comes to keeping the far-right off the streets.

A member of the Madison, Indiana KKK chapter who I found through a yahoo account after the rally, responded to my email saying, “We don’t hate anyone except Antifa.”

I’ve read about this rejection by the Klan that it is a hate group in other publications, despite what the SPLC describes as its “long history intrinsically tied to violence and soaked in the blood of thousands of innocent victims.”

I remember thinking: can he tell I’m Jewish by my name? I felt very nervous. I asked for his name. He refused to give it to me. 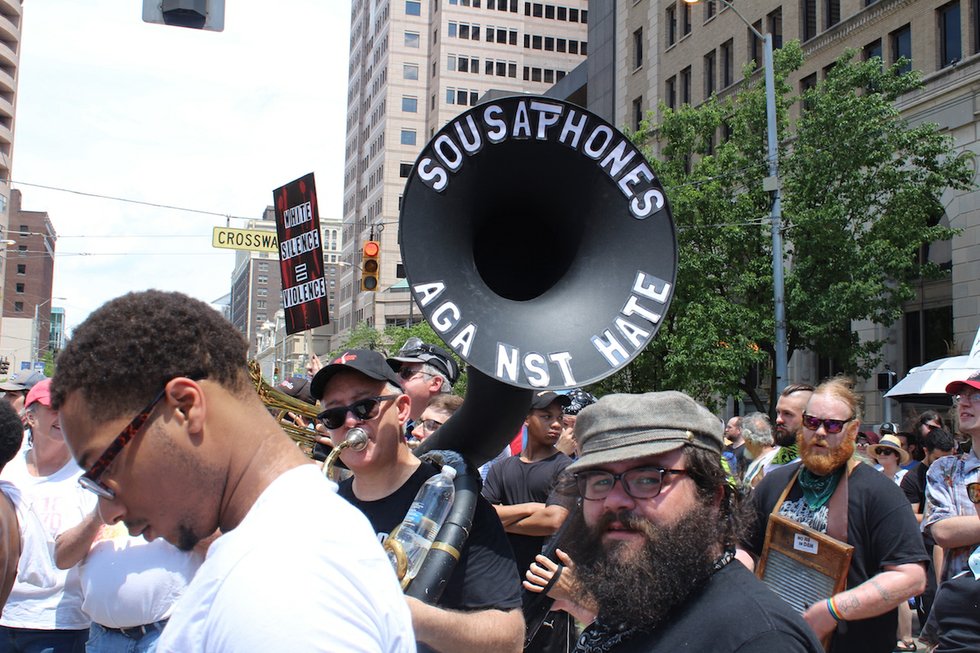