NOW MagazineNewsLetters To The EditorWill Google use cops’ facial recognition technology on waterfront?

Will Google use cops’ facial recognition technology on waterfront?

Plus, Toronto's electric buses late in arriving, slipping under the radar on brunch and abstinence doesn't work with opioids in reader mail this week 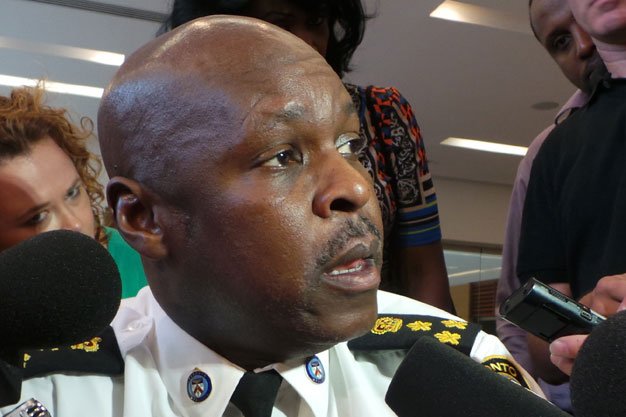 Chief Mark Saunders has kept the public out of the loop on Toronto police's use of facial recognition technology.

Regarding the Toronto police’s use of facial recognition technology (NOW, February 20-26). Does anyone actually believe that the proposed Google (Sidewalk Labs) community for the waterfront will not include facial and other physical recognition technology? Will we create a digital gated community that excludes thousands of Torontonians from currently publicly owned land? Thanks for the coverage of developments, but please keep reviewing the Brave New World that Google wants to create right here right soon.

The TTC is testing electric buses as a replacement for fossil-fuel burners  (NOW Online, February 24), but why is it not testing hydrogen-powered buses as well? Unlike electric buses, hydrogen buses have a range equal to diesel buses. It takes a few minutes to fill a hydrogen bus tank, but can take hours to charge a battery. Batteries perform poorly at high and low temperatures in summer and winter. They degrade over time and have to be replaced at great expense. Hydrogen fuel storage will likely last for the life of the vehicle. The mining and disposal of lithium (essential for batteries) has a negative environmental impact. Range anxiety is one of the major barriers to the adoption of non-fossil-fuel-burning vehicles. Hydrogen fuel cells offer a longer and more dependable driving range than electric vehicles.

Steve Munro rightly articulates some problems with SmartTrack (NOW, February 20-26). But it’s also important to thank city council for expanding the City Building Fund to include funding for transit projects.

Certainly, we require additional tools – including new parking lot fees – but increasing the levy was vital. We need more transit dollars, and this will provide billions. Council showed guts here and we should appreciate it.

Under the radar brunch

You always forget one of the best places in the city and the west end in your brunch guides (NOW, February 20-26). Mezzeros, aka The Mezz, may be a little under the radar on Queen West, but trust me you won’t be disappointed. P.S. Please withhold my name as they will kill me if they knew I wrote this.

I am very disappointed that I have not found a food column in recent editions of your magazine. It’s the best way of find out about new restaurants and developments associated with food in Toronto.

I’ve been on the front lines of harm reduction since my teens (NOW Online, February 19). One of my first jobs was handing out fruit and water at raves for a couple of Toronto production companies. One of my college professors was involved in TRIP!. I volunteered at ACT for a while in my 20s.

Opioids changed everything. My first relationship was with a guy I met at a party. I put him through abstinence-based rehab twice. But when he got hooked on opiates, shit got scary. Even my knowledge of harm reduction couldn’t protect me or help him because I couldn’t tell when he was using or not. I couldn’t see it.

I’ve lost countless friends to suicide, overdose and HIV/AIDS. People are dying because abstinence doesn’t work. It drives people into darkness and silence about their substance use. I know this because I’ve attended people’s weddings and, shortly after, their funerals. And these lives had value. They were people I cared about immensely and I miss them all the time.