Some day my e-bus will arrive

In October, Toronto council declared a “climate emergency” and set a target of net-zero emissions by 2050 with the option of a more aggressive 2040 target. The Toronto Transit Commission (TTC) is also aiming at 2040, although it has a head start with subway and streetcar fleets already powered by electricity. But buses are a different story.

The move to zero-emission buses is one of many on the TTC’s long list of “unfunded” projects.

In 2017, the Chinese company BYD, the world’s largest builder of electric buses, made an unusual pitch directly to the TTC in the guise of a public deputation to the board. This presentation started the TTC’s trial of zero-emission buses.

A technology change on this scale is complex. Getting there will be a challenge.

For seven decades, bus technology used by the TTC relied on diesel engines almost exclusively or, more recently, as a generator for “hybrid” buses with electric motors.

Any new technology is something you have to get right, and a bad choice can haunt a transit system for years, even decades, until the time for replacement arrives. The cycle time for transit vehicles is much longer than for consumer purchases like a car. An operational life of 18 years or more was common for buses in Toronto, but this has declined to 12 years.

The shift to diesel-powered transit began with buses replacing streetcars on worn-out systems after World War II. Many networks needed extensive repairs, and some did not serve changing demands as cities expanded into new suburbs.

Trolleybuses took over a few existing streetcar systems, but diesel buses were simpler to implement and operate for most cities. The automotive industry provided incentives for this, and in many cases simply bought up and closed old streetcar systems.

In the early 1990s, Toronto’s electric trolley buses fell victim to so-called cleaner natural gas, but these buses were “clean” only relative to diesels of the day. The vehicles and technology did not last in Toronto, but the trolley bus network was lost. Vancouver is Canada’s only city with a fleet of modern trolley buses.

The shift from diesel to electric started with hybrid buses using an onboard diesel generator and power recovered from braking to charge batteries that, in turn, power the electric motors. Emissions are lower than a regular diesel bus because there is less stop-start cycling for the engine. This technology was not perfect, and the TTC is now on its second generation of hybrid buses after battery problems in the first. 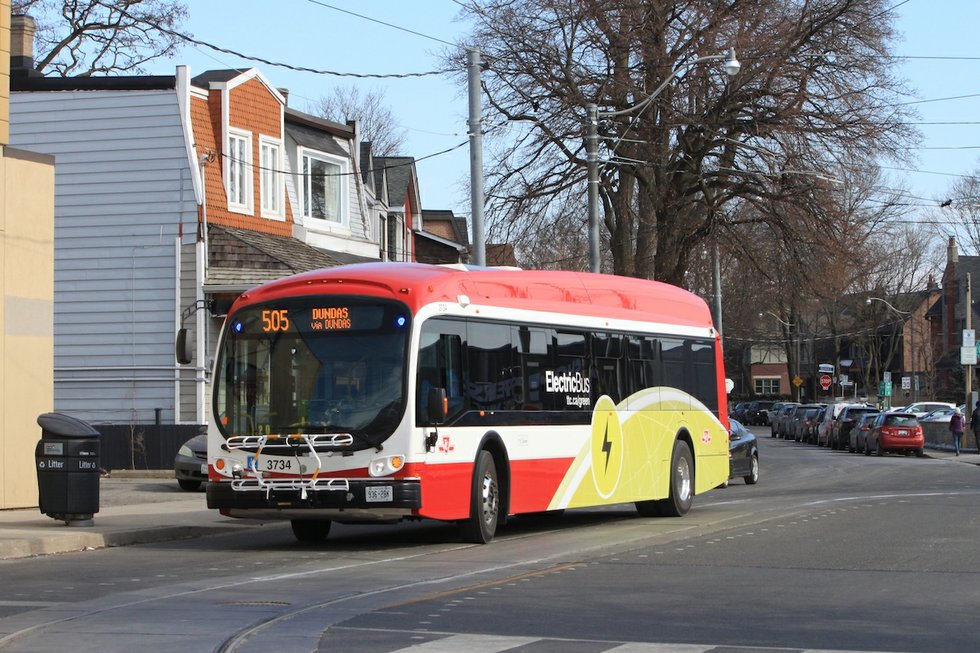 While the trials on e-buses proceed, the TTC is at least a year away from any decision on technology or suppliers.

The primary question is reliability. Do the buses perform as advertised? As the fleets become available, they will operate under varying conditions including weather extremes, challenging routes and heavy passenger loads.

Power consumption and charging times are other key factors. A large fleet needs a lot of electricity delivered in a short time to charge up for a day’s operation. Only vehicles with long-range capabilities that recharge overnight are in the TTC trial.

That triggers a need for power at future garages that Toronto Hydro might not be able to provide with existing infrastructure. The alternative is charging stations on routes, but this creates logistical problems for refueling stops.

Then will come the long regeneration period shifting from diesels and hybrids to a fleet entirely of zero-emission, battery-powered buses.

Diesels will still be with us, albeit in declining numbers, until about 2030 because the most recent purchase was in 2018. Hybrids will be around longer both because there are hundreds of brand new ones on Toronto’s streets today and because the TTC cannot confidently shift all purchases to e-buses for several years.

Battery-powered buses bring higher up-front costs for vehicles and charging infrastructure but the savings in operating costs are not yet known.

Going green will test council’s will to spend on this priority without starving the transit network’s growth and reliability.