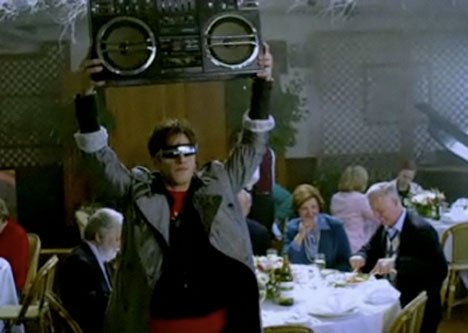 “This was a cautionary tale/a boombox is not a toy.” Those final lyrics cap off another Web hit for The Lonely Island, the Saturday Night Live songwriting crew led by Adam Samberg. For the recently released Boombox, they enlisted The Strokes’ Julian Casablancas to belt out a few choice lines.[briefbreak]

The song is typical Lonely Island: non sequitors, odd storyline, gross-out imagery. Well, that’s if you count old folks French-kissing a gross image. Samberg sings about his boombox bringing unity to the staid scenes he portrays, such as a yuppie dinner party, a retirement home and New York streets. In New York, when Samberg turns on his boombox, suddenly people start wearing fingerless gloves and “I saw a Spanish guy doing the Bartman.”

If you’re tired of Samberg’s where’d-that-come-from songs, then you won’t be feeling Boombox. But if you’re laughing aloud at every mention of boiled goose, then you understand the song’s humour. It’s wrapped in a wit that plays on its randomness, much like Throw It on the Ground (huh, why is he so pissed at everything?). The premise of Lonely songs aren’t for everyone, but they seem to be appealing to a Web audience already clamouring for the weird humour of Robot Chicken, Jake & Amir, etc.

The Lonely Island songwriting satire has even inspired comedians to wonder what makes a Samberg hit. Check out Toronto resident Noah Plener’s video on Samberg’s creative process. It’s funny because it’s strangely true – Samberg seems to take random things (boombox, being on a boat), adds a few vocal effects, makes a slick video, and then the views keep piling up.

Riffing on seemingly inconsequential stuff is often a strategy for viral success (see Jon Lajoie), but I’d like to see the crew stretch their creative range. A YouTube commenter sums up my sentiments: “Didn’t love it or hate it. Didn’t? bring out anything in me. Maybe that’s worse.”

The next Lonely tune doesn’t have to be about something weighty, but perhaps Samberg et al can look beyond their living room – “look, there’s a boombox, let’s write about it!” – and offer us something fresh and innovative.

Or is that wishful thinking?[rssbreak]