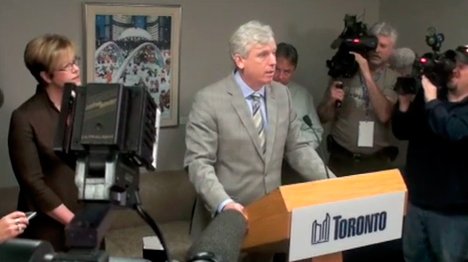 Tuesday night, Mayor Miller let it be known he’d be making a surprise announcement in the morning.

Wednesday morning, he announced a new $100 M surplus for the 2010 budget, and a lower tax increase than originally projected.

By afternoon, the press had taken to the Web denouncing him.

“WOW! WHAT A LET DOWN!” texted Jerry Agar of Newstalk 1010, which I’m told is a radio station of some sort, while CP24’s Stephanie Smyth accused the Mayor of “abuse of media.” (Matt Blair assembled a wee round-up of the Twitter pique).

Seriously, eh. Calling the city hall press in to city hall to make an announcement about the city budget? Who made this guy Mayor, am I right?

With the underdstanding that the Giambrone “scandal” (“I, a young man… have had SEX”) set the bar for Serious News pretty high, I’ve tried to imagine what kind of announcement the Mayor could make that wouldn’t have invoked such aggressive boredom. It goes a little something… like this:

MAYOR MILLER: First, let me thank you for coming here to City Hall, which, as many of you know, is also where I work. As I approach the end of my term, confident that I leave our city with new investment in transit and a hard-won balance between finance and service, it is with some sadness that I must announce I have been impregnated by a large baboon. At this time I feel it would be best to let the large baboon say a few words.

It’s true: Miller budget communications often appear to be just barely under the direction of a squirrel with a bottle of caffeine pills and an iPhone (“OMG we have 2 cut services!!1” “No srsly tho we just tax real estate” “OMG we have to 2 cut services1!!” “LOL found a hundo its cool”).

But we must consider what they’re dealing with.

And, conveniently, Exhibit A showed up a couple of hours following Miller’s announcement – George Smitherman, having even less to say, but, somehow, the rapt attention of the press nonetheless. “Why is it we’ve got a budget process designed to play fright and fear at the front end, so the Mayor can be the white knight riding in?”

Budget surprises are the standard Hail Mary play for Liberals at both levels, and McGuinty has refined it to an art form through stringing the city along for transit funding every year. Consider too that an enormous government in still funded through a tax designed for sidewalk repair.

And yet it tries, with what little wiggle room there is, to keep budgets responsive to public input (though follow-through is getting spotty).

Democracy is messy. “So they did the math wrong?” is the sarcastic retort I’m seeing. Ha ha! No. This isn’t cashing out the end of the night and divvying up the tips. It’s a multi-billion dollar budget for services directly affecting lives. Negotiations are ongoing. Shortly after the announcement, Adam Vaughn told me of trying to wring a few million from the cops the previous evening. (It went uncommonly well. And no one’s angry at the Star for abusing itself by telling us.)

From what some have told me, much of the surplus is revenue from Development Charges, final numbers for which come late in the game. Turns out the condo market was better than expected.

Of course, that takes a bit of a shine off of Miller’s announcement: if it can go up a bit this year, it can do down a bit next year. The news isn’t that there’s a hundred million under the cushions. The news is that, though coming out of a deep recession and trapped in a relationship with a Province acting more like a colonial power, the city of Toronto is maintaining service, with a ~1% fluctuation the biggest (immediate) worry.

I don’t like taxes either, but considering how much we all moaned about hauling our own trash, I’ll take my chances with these guys for now.

Toronto’s relationship with the Province is lately being called its “structural deficit,” and and crowing about a short-term “surplus” makes talk of fixing this long-term “deficit” confusing, especially to most of us who rely on a visibly reluctant press to explain things. The posturing, though strategic, is a strategic retreat, across territory shaped by slash-and-burn rhetoric.

Surpluses and lower taxes are not inherently good things. Governments exist to allocate public resources, according to public priorities. The latter precedes the former. And then there’s this tepid move to “multi-year budgeting,” something Smitherman’s been talking.

It’s not as simple as it sounds. Five year plans are great for multinational corporations and Soviet Blocs. Local government needs to adjust priorities as public interests apply grassroots pressure. Budget staff already plan and forecast. But if you’re interested in a city that’s able to serve all, you don’t want to completely lock things in years ahead of time – especially when starved by senior governments.

And of course, though Smitherman has dangled the promise of multi-year budgeting (let’s see him try to keep it), there’s only opprobrium when Miller clumsily bites.

Asked if he would commit to a TTC fee freeze, Smitherman answered (?):

“Something I think is very problematic is the surge and starve mentality… which creates the need to have a very large increase, such as the one that’s just been perpetuated on people. In the course of 2011 budget I will have the opportunity to bring [a freeze] forward. But this is 2010, and the city’s obligation today is their 2010 budget. And in 2010, TTC users have had perpetuated upon them a serious increase. So if the Mayor wants to play the TTC card, why doesn’t he show us the resources to roll back the increase that he’s just now perpetuated on us?”

Surge and starve? More like wealthy and wanting. Or Province and City. Anyway, I’m not sure I trust a man who doesn’t know what “perpetuate” means.[rssbreak]