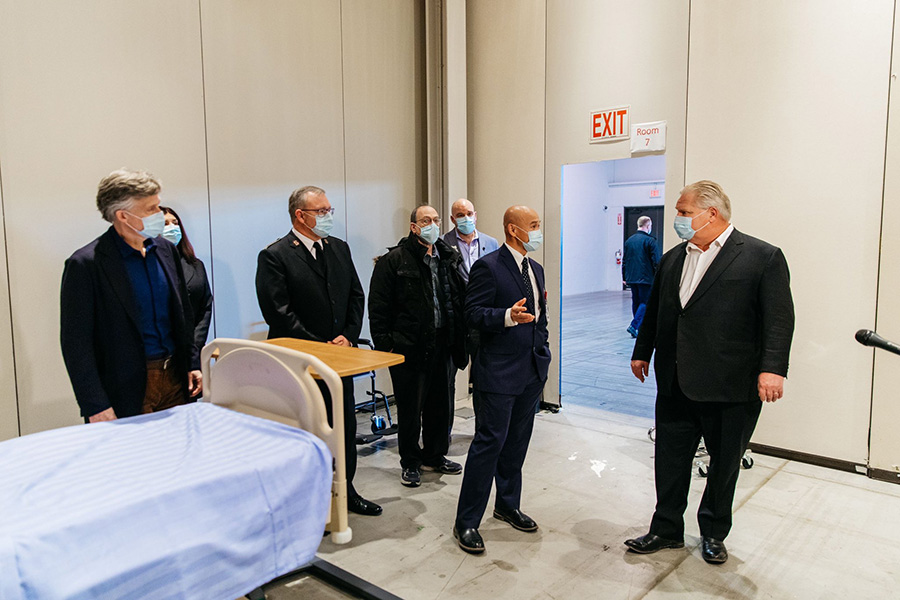 Doug Ford announced the opening of beds at the Toronto Congress Centre last week to deal with hospital overflows, only we don’t have the nurses and health care workers to staff them.

A handful of anti-vaxxers showed up to “protest” the closing of schools at the home of education minister Stephen Lecce on Monday night. They came armed with a megaphone, loudspeakers and siren, but little in the way of common sense.

Lecce can be blamed for a lot of things, chief among them his absence throughout the latest Omicron wave as well as failing to take all the necessary steps to protect children and education staff in general throughout the pandemic. That’s evident to anyone who has been paying attention, except for anti-vaxxers agitating for a return to school.

Then a crazy thing happened. The Toronto Star’s Queen’s Park bureau chief tweeted that the Ford government would be sticking to its plan to return kids to classrooms next Monday, despite the Omicron fires burning across Ontario.

The timing was probably just a coincidence, right? Just like Lecce’s appearance at a photo op in Mississauga yesterday amid unconfirmed rumours that the minister was allegedly sunning himself in Florida while the rest of us were under COVID-19 restrictions. Ford also held a photo op last week to announce the opening of beds at the Toronto Congress Centre to deal with expected overflows in long-term care facilities and hospitals over Omicron. Only, we don’t have the nurses and health-care workers to staff those beds, but that’s another issue.

What can be said with more certainty as the pandemic has grown and morphed is that the Ford government has become more reactionary. When they don’t know what to do, they run and hide – only to emerge at the last minute to do what they were supposed to do in the first place. The decision to reportedly return kids to in-person learning is another one of those moments where the government is running from its responsibility.

It was barely a week ago that Ford was announcing that Omicron is nothing like anything we’ve ever seen before and to “brace for impact,” ’cause what’s about to hit us is akin to a meteor from outer space. Ontario’s chief medical officer of health chimed in that the current wave would be with us another six to eight weeks.

Since that press conference, COVID-19 counts in the province have hovered around 11,000 per day (although the numbers are much higher since the government has limited testing) while hospitalizations have soared along with the numbers in ICUs. On Tuesday, the Ontario Hospital Association reported that 80 adult admissions to ICUs in Ontario, the highest single-day total since the pandemic started.

The health-care system is being overwhelmed not just because of the numbers of sick people being admitted. It’s also because of staff shortages caused by the spread of the virus among health-care workers. The city’s emergency services, including ambulance, are also feeling the effects of Omicron, and currently operating with an average of 14 per cent fewer staff per day due to the virus.

While some are advocating a return to school, the Registered Nurses’ Association of Ontario is calling for stricter lockdown measures and a return to Step One of the province’s Roadmap to Reopening (we’re currently in Step Two) to avert what’s being described as a “full collapse” of the health-care system.

It would seem an inopportune time to send kids back into the maelstrom.

But having already backtracked once on school reopenings – the Ford government initially delayed reopening for two days before deciding to go online for two weeks – the government does not now want to appear to be reversing course yet again. And once again, teachers’ unions have not been consulted and have had to hear news confirming a return to class on Monday through social media.

There has been a lot of clamouring among mental health professionals about the need for kids to be back in school. Big city mayors have also weighed in. It’s hard not to agree that in-person learning should be the preferred option. For most kids, it will be a month (counting Xmas break) that they have been away from school.

But those advocating a return to school seem to dismiss the mental health effects on kids forced to return while the risk of transmission of the virus remains high. That’s not an environment conducive to learning either. Many of the parents of those kids will simply opt not to send them back. It’s what’s happening in the U.S. where absenteeism has surpassed 30 per cent in some school districts in New York City.

Advocates of reopening now also seem to forget that there are many students that have been in online learning since the start of the pandemic precisely because of lingering uncertainty about the virus and concerns about the government’s ability to keep schools safe. Those pushing for a reopening also seem to dismiss the long-term effects of COVID-19 in children.

Will it be any safer for children to return a week from now than it was when the government announced its delay in reopening a week ago? The virus has yet to peak. The risk of spread remains significant.

And despite the added safeguards announced by the government for teachers and education staff, including the distribution of PPE and N95 masks, the Elementary Teachers’ Federation of Ontario says it can’t confirm that the equipment has been delivered to all Ontario schools. As of right now, it looks like teachers and staff won’t receive their equipment until their scheduled return on Monday.

Before Omicron hit there were more than 1,151 schools in Ontario with COVID cases and 356 with cases among staff. Twenty-one schools were closed because of outbreaks.

We won’t know what the numbers will be moving forward because the province has decided to end the requirement to report COVID cases in schools. Classes where cases occur will also not be dismissed to contain the spread, as per previous protocols. The province has also restricted testing in schools to symptomatic cases.

Moreover, about half of elementary school-age children have yet to be vaccinated at least once to protect themselves from the virus. The prioritizing of teachers and children for boosters continues, but we’re pretty much where we started with all elements in place for the virus to spread in the school setting and for kids to bring that home.

The Ford government continues to download its responsibilities to school boards to manage a growing crisis. Meanwhile, anti-vaxxers protesting outside the education minister’s home seem to get their way.