The premier is trying to frame the current Omicron wave as inescapable, but the real question is who's actually in charge at Queen's Park? 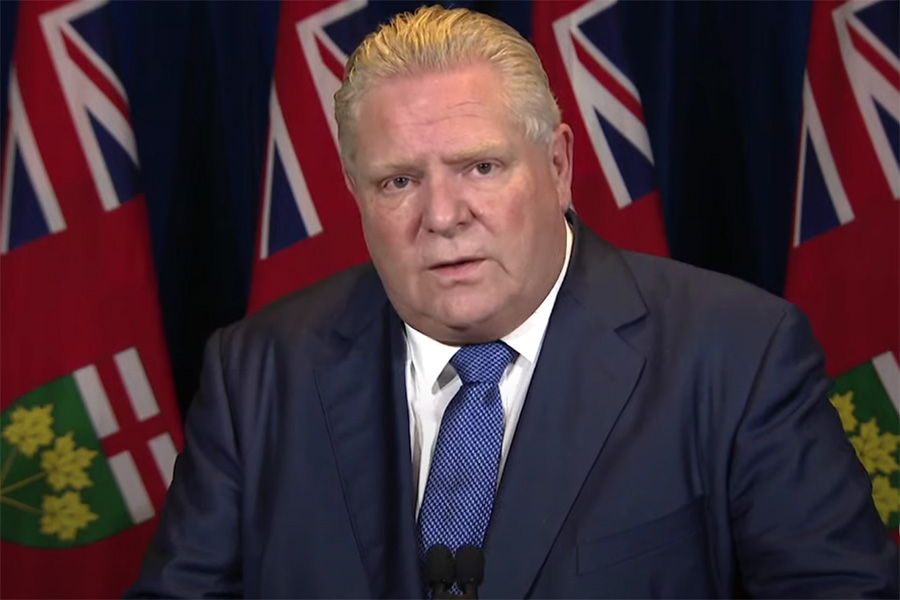 It looked like Doug Ford was about to burst into tears before he even got started. But he managed to hold it together. Maybe he decided at the last minute that it would look too contrived after being absent from his post the last two weeks as the Omicron variant of the coronavirus rips through the province.

But unlike the last time he made a complete mess of his government’s response to the COVID crisis, there would be no apology, only more excuses and a play for public sympathy.

After deciding to delay the opening of schools last week for a mere two days, the Ford government has reversed course announcing on Monday that all schools in Ontario would switch to online learning for the next two weeks.

The government has also announced new capacity restrictions on retail and the closing of indoor dining in restaurants, as well as the closing of concert venues, theatres, cinemas, museums, etc…. Elective surgeries have also been cancelled to save precious hospital resources for the coming onslaught.

But once again the premier was offering a nudge, nudge, wink, wink to his base during a press conference, emphasizing that the measures would be “temporary” and “time-limited.” We’ve heard it all before, unfortunately.

Only the measures this time are not to totally decrease the case count, but to “blunt” the coming storm, offered Ontario’s chief medical officer of health Kieran Moore, ‘cause there is no stopping this one.

Ford warned Ontario to “brace for impact” – yes, he actually said that.

As public backlash over the province’s mishandling of the current Omicron wave reached new heights over the weekend, the only thing left for the premier’s handlers to figure out was how not to make him look completely incompetent after being missing in action.

On that front, the premier offered the usual bromides about Omicron being like nothing we’ve ever seen before and a “very different problem than we faced in the past.” And how “the result could be catastrophic” for Ontario’s hospitals if the province doesn’t act quickly.

Ford said it took him “30 seconds” to make the decision to return to a modified step 2 of the province’s “Roadmap to Reopen,” once he saw the data that Ontario could be washed up in a “tsunami” of COVID cases. All of which raises the question, where has he been the last two weeks?

Ford almost had us, until he offered a “shout out” to his education minister Stephen Lecce, who Ford described as “the best minister of education the country has.” That loud roar you hear is the sound of laughter.

Lecce, like Ford, has been MIA since Omicron reared its head in Ontario in mid-December. Arguably, they’ve been MIA for most of the pandemic where schools are concerned. But we digress.

The premier had the data last week when he and (presumably) his education minister decided it was okay to send kids back to school in the thick of the current wave. What changed? Ford burbled something about hospitalization numbers when asked that question at his presser on Monday. But it’s more deflection.

Hospitals and the province’s own COVID science advisory table were raising the spectre of ICUs becoming overwhelmed by Omicron cases weeks ago when the virus was first emerging. Ford is in damage control mode now.

Indeed, it was only after it became clear that the decision to send kids back to school was proving wildly unpopular that the government decided to change course – but not before sending out trial balloons to measure public opinion over the weekend.

It’s become standard operating procedure for the Ford government to leak information to friendlies in the Queen’s Park press gallery as a way of gauging public sentiment and determining public policy on the pandemic. And it’s become more chronic as next June’s election nears.

Leaks out of Queen’s Park on Saturday, for example, suggested the Ford government was considering more capacity restrictions on restaurants and other retail to deal with the current explosion of cases. That went over like a lead balloon on social media, with the president of the Canadian Federation of Independent Business weighing in on Twitter to say businesses couldn’t afford another lockdown. No doubt. By Sunday night, word was that the cabinet (including the all-important rural caucus members not completely convinced of the gravity of the situation) was also revisiting the decision to reopen schools.

There are still those who believe that the premier has done all that could be expected of him to deal with an ever-changing crisis. At least, that’s what internal polling has been telling the government. And it’s why Ford continues to try and outrun the virus with half-measures that don’t upset his base. The original decision to send kids back to school was just as calculated. Better for Ford to piss off teachers’ unions than parents who now have to figure out child care or juggle work from home and kids (again). In the process, his indecision is screwing everyone else, including the very businesses he claims to represent.

The government has tried to frame the current Omicron wave as an inescapable fact of life. But the list of bad decisions throughout this pandemic is a long one. From the delayed rollout of boosters to the absence of an adequate testing and tracing regime, the Ford government’s actions throughout the pandemic have more often than not been a case of too little too late and served to wear us all down in the process – not to mention, carry on an agenda under cover of COVID to dismantle public health care and create a crisis in public education.

Any chance the province had at weathering the current storm went poof months ago when the government refused to spend the billions handed over by the feds to put in place the ventilation and testing systems needed to send kids back to school safely. Now the chickens, as they say, are coming home to roost.

Ford kept coming back during his press conference to the fact that other countries are also struggling to deal with Omicron. But Ford’s absence from public view as COVID has raged just so he could avoid having to answer questions tells a different story.

If job number one of government is to ensure the public has confidence in government, then this government has failed miserably. Ford has lost the moral authority to lead, but most Ontarians are too tired to care at this point. They’ve been pretty much left on their own since this pandemic started.

But the vicious spin cycle of the last few days suggests something more – a government in disarray. At this point, it’s unclear who’s actually in charge at Queen’s Park.