The battle over beautification 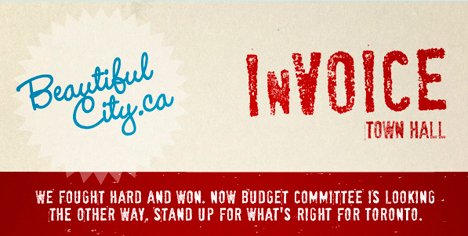 This time last year, artists and progressive councillors on the Budget Committee seemed like fast friends.

Even through urgent demands, public deputations rammed with artists were suffused with the feeling that community organizers were allies in pursuit of a more enlightened budget.

Call it young love. One budget cycle later, the spark has already died. On a cold Monday night (the first of March), budget councillors are upstairs in Chambers, holding hearings but all the young arts organizers, maybe fifty of them around 100 of them, are one floor down, and complaining of betrayal.

Members of the Beautiful City Alliance, a network of artists and grassroots cultural organizations, are trying to figure out what went wrong – or at least coming to clear agreement that something did – and literally reviewing the tapes: video of progressive councillors arguing in favour of a billboard tax, specifically devoted – and this is key – to funding arts projects..

Popularized as the Beautiful City Billboard Fee, the tax is brainchild of BCA member Devon Ostrom, who started campaigning for it seven years ago. It came in to favour among young arts organizers as a way to infuse millions in to arts initiatives, especially those operating as de-facto social services in far-flung Priority Neighbourhoods.

It’s arguable – and activists certainly argue – that the tax only became possible because of Ostrom’s passion and the surging political support of the Alliance. When lefty councillors pushed for the tax at Council, says Ostrom, they relied on the BCA’s argument that it was an innovative and revenue-neutral way to fund vital community groups in a time of crisis, and beautify the city in the process.

Now, there’s no such promise: the revenue from the tax is going in to general revenue, to keep the city budget afloat. Councillors say no one ever planned otherwise Councillor Perks points out that arts funding was saved from cuts. Activists say they’ve been used.

You can judge for yourself: Beautiful City has put a montage of videos up on their site.

Of particular interest would seem to be statements by Howard Moscoe (“This money will be going toward beautifying, rather than general revenue,”) and Adam Giambrone – neither of whom are on Budget.

Budget member Gord Perks has been especially targeted for backpedaling, but he points out a vote to create a tax is separate from a vote on to direct it to one fund – and that he always argued against the latter. There’s no documentation suggesting otherwise.

“This money would not exist if the arts community had not pushed for it,” BCA panelist, B-girl, and community health activist Sara Ripley tells the gathering.

Ostrom says the coalition feels that over the next year, 90 per cent of the money should fund arts groups, mostly in Priority Neighbourhoods, and mostly employing people to work toward “public realm beautification” projects.

There’s no billboard money yet – the tax comes into effect in April – and insiders I spoke to say there won’t be til next year, since the (optimistically?) projected $5 million in revenue is somehow needed for staff who will enforce the tax. With golden lasers, presumably.

By some accounts, Budget councillors are pissed off at activists’ belief that community groups, many of whom have never been involved in city politics before, have come in and expected to direct the budget. While activists are pissed off at Budget councillors taking their idea and running – and, say BCA leaders, turning their backs on a generation of newly passionate young activists.

But that power is obviously understood: activists may not be going up to the deputations, but then people seem willing to come to them.

Adam Vaughan comes down for an impromptu discussion on behind-the-scenes lobbying strategy. Perks shows up later, and spends half an hour answering questions on the budget process, illustrating how the city is effectively broke, thanks largely to senior governments.

And Speak of the devil, Mayoral-hopeful and former deputy Premier George Smitherman is here. He spends most of the time sending text messages (Dare we hope for an epiphany sent to McGuinty: “OMG d00d TDot ndz mor revenue pwrs”?)

More is being done here by a couple of councillors and a handful of activists to educate people about City Hall and open up civic processes than has been done by the collected mainstream press corps in the last ten years.

Lobbying is ongoing Ostrom tells me BCA members are still making calls. But chatting with me on Tuesday, Councillor Kyle Rae, now working on his last city budget, says activists need patience – the money can flow next year. “I’ll be here arguing for it.”

But of course, there’s no guarantee the budget won’t be in worse straits, or that anyone making such a promise will still be in office after the election. He won’t.

In any case, let’s hope the BA can cultivate an appreciation for the long game – unprecedented passion aside, movements aren’t built in the space of one budget cycle.

But let’s hope, too, that the few councillors actually invested in community power realize the singular, delicate and possibly short-lived nature of this new-found political faith of young people. “I don’t think it’s being realized,” says one BCA member. “The effect that this [disappointment] is going to have on future mobilizations.”[rssbreak]