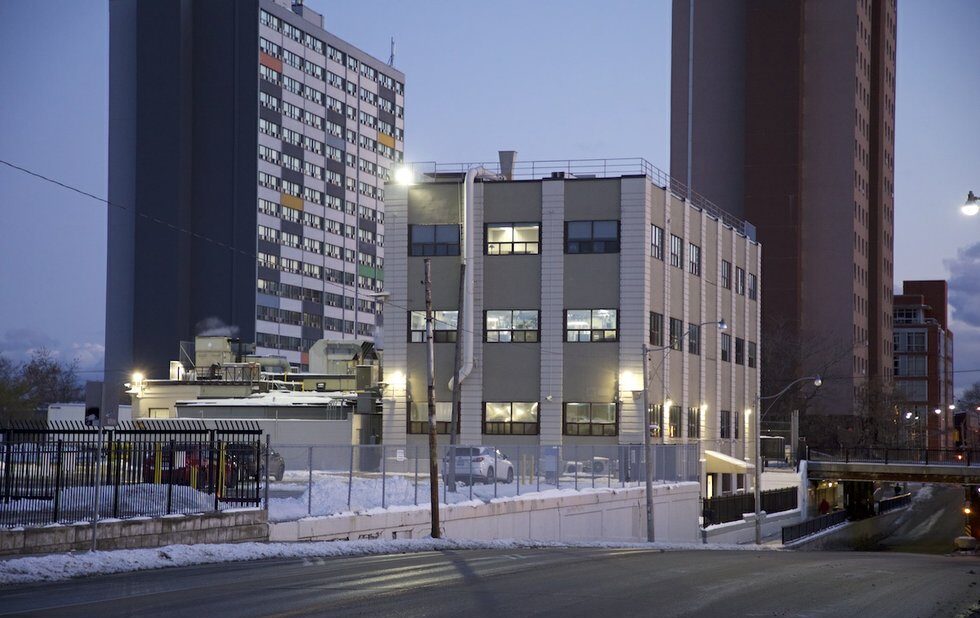 The BWXT (formerly GE-Hitachi) uranium processing plant at 1025 Lansdowne north of Dupont has applied to the Canadian Nuclear Safety Commission (CNSC) for a 10-year licence renewal.

The company has requested “flexibility” to conduct operations at its plants in both Toronto and Peterborough, although a BWXT spokesperson says there are “no plans” to phase out operations in Toronto.

“We are purely looking for the flexibility during the proposed 10-year licence period should there be changes to the business climate to make that change,” Natalie Cutler of BWXT says in a phone interview.

Dr. Gordon Edwards of the Canadian Coalition for Nuclear Responsibility says it’s difficult to speculate on the company’s intentions.

“If they are not shutting down the Toronto operation, what would be the point in duplicating the operation in Peterborough?”

It’s a good question given the fact that Edwards anticipates that the demand for CANDU fuel is not going to be growing anytime soon with the future of the Pickering Nuclear Generating Station up in the air.

Area Liberal MP Julie Dzerowicz says the possibility of the company relocating would not come as a surprise, given the local backlash over its operation in recent years – not to mention, the increasing value of properties in the area.

At the same time, she says she is open to the prospect of the company’s continued operation in Toronto.

BWXT Canada Ltd., a subsidiary of Lynchburg, Virginia’s BWX Technologies – which operates one of only two facilities in the U.S. licensed to process highly enriched uranium – purchased the Lansdowne facility from GE-Hitachi in the summer of 2016 after failed community attempts to shut the plant down.

The plant processes about 53 per cent of all the nuclear fuel used in Canada’s nuclear reactors. Drums of yellowcake uranium dioxide powder are trucked into the facility and transformed into pellets for use in fuel rods at the Pickering and Darlington reactors.

Issues around air quality in neighbourhoods surrounding the facility have been an ongoing concern.

That doesn’t reassure Anna Tilman of the International Institute of Concern for Public Health. She argues that “the release limits set by the Canadian Nuclear Safety Commission are notoriously liberal. Meeting such limits gives an impression to the public that all is okay, which is definitely not the case.”

According to Edwards, “The primary hazard from uranium dust inhalation or ingestion is alpha radiation,” which can remain in lung tissue for years.

Toronto Davenport city councillor Ana Bailão was unavailable to comment on this story. Mayor John Tory’s spokesperson Don Peat offered in a prepared statement that it’s up to the CNSC to ensure the plant meets safety requirements.

“The Mayor fully expects the Canadian Nuclear Safety Commission to ensure the health and well-being of all Toronto residents is protected, starting with the dissemination of any requested information.”

Meanwhile, Jane Scott of Citizens Against Radioactive Neighbourhoods Peterborough says there should be special concern given to the fact that BWXT’s Peterborough facility is directly across the street from the Prince of Wales Elementary School.

“They absolutely should not be allowed to do this in a residential neighbourhood,” says Scott. “They won’t even allow peanut butter in that school!”

A hearing into BWXT’s licence renewal application has been scheduled in Peterborough for March 4-5. Participation in the public hearing through video-conferencing will be available from Toronto. The deadline to make a written submission or presentation at the hearing is January 27.