NOW MagazineNewsWatch out Toronto, Mississauga is passing you in the bike lane

Watch out Toronto, Mississauga is passing you in the bike lane

The 905 municipality gets behind separated bike lanes in a big way, while in the Big Smoke the Tory administration continues to turn public safety into a political issue in the debate over bike lanes on Bloor 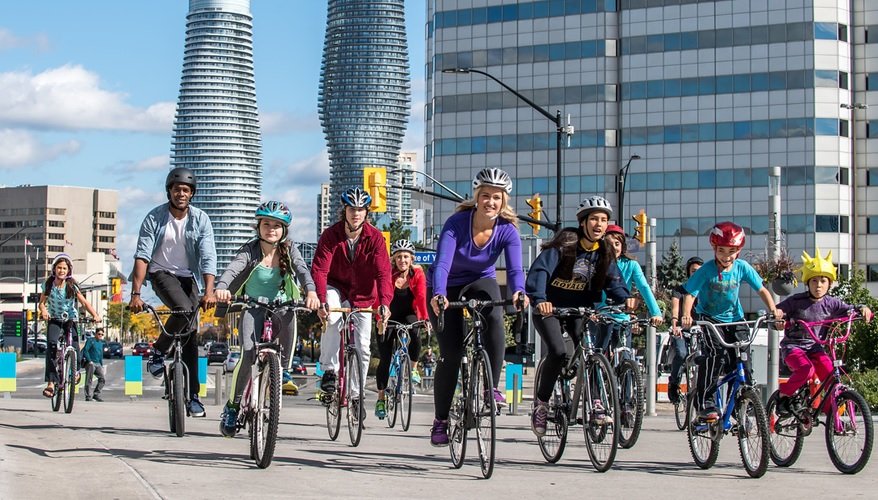 Mississauga is in the midst of gathering public input to update its bike plan. Guess what? The public really want bike lanes.

Not just white lines on the pavement kind of bike lanes. The city is talking about separated bike lanes on major arterials: Dundas, which is currently in the midst of a major corridor study, Burnhamthorpe and on Hurontario, where cycling is proposed as part of the LRT plan.

The idea is not only to connect Mississauga’s neighbourhoods and historic village centres, but to make it possible for anyone and everyone to bike safely.

Mississauga Councillor Chris Fonseca acknowledges that the 905 city “is in a very different situation than Toronto” because it doesn’t have the same density (yet) and “a lot of our [road] network was built specifically for cars.”

Also, there are many cul-de-sacs that don’t allow for cut-throughs like Toronto’s grid network of side streets. Wider, faster roads mean Mississauga will need to invest more in protected infrastructure.

But Fonseca sees these challenges as opportunities. More to the point, she says it’s crucial to look at all planning projects through a cycling lens when redesigning or redeveloping any road.

She credits the citizen-led Mississauga Cycling Advisory Committee, which she sits on, organizes group rides with and regularly attends planning meetings to provide feedback to City staff, for pushing the current direction.

Fonseca is clearly proud of the committee’s work. She says it’s played a key role in keeping the public engaged in cycling initiatives.

Toronto lost most of its citizen committees, including its cycling committee, when previous mayor Rob Ford killed them. The current mayor, John Tory, doesn’t seem interested in bringing them back.

But even without Ford, who famously removed bike lanes on Jarvis, we are still debating the merits of bike lanes, including the most studied bike lane in the city’s history: the current pilot project on Bloor.

The one-year experiment is up for review this fall. And unlike Mississauga, it seems Toronto politicians just aren’t into putting bike lanes on major arterials judging by some of the recent rumblings from City Hall.

The Bloor bike lane may actually be removed because it might slow down motor vehicles a little bit and, gasp, possibly remove a few on-street parking spots, too.

I attended the June 5 open house (one of four meetings proposed for the Bloor pilot) to ask city officials why we’re talking about removing bike lanes on Bloor instead of how to improve safety.

Shawn Dillon, the City’s acting manager of Cycling Infrastructure and Programs says, “We are looking to find the right balance. [We’re] trying to minimize impact on motorists, trying to create a safe and efficient network of facilities for cyclists and ensure our neighbourhoods stay healthy and vibrant.

“It is really going to be up to council to decide what is the right balance. If the final recommendation is that [the bike lane] has not been successful then yes, it will be removed.

“It’s all temporary. It’s primarily just paint and bollards so it’s not too expensive to remove,” Dillon says, adding that there is no magic number of cyclists using the lane that it would take to call the lane a success.

Studies and surveys, including the more than 12,000 responses to the City’s own online census, show that both cyclists and motorists feel Bloor is safer with bike lanes. Local residents and businesses also agree that the trade-offs, namely, a few minutes longer travel times during evening rush hour for vehicular traffic, are “acceptable.”

Before the pilot, reported collisions between cyclists and motorists along the route were a daily occurrence. The city’s Vision Zero strategy for safer streets has a universal mandate of “no loss of life” and includes lowering speed limits.

But the city’s chair of public works, Councillor Jaye Robinson, who is spearheading the Vision Zero plan, has been public about her ambivalence to bike lanes on Bloor. (Robinson did not respond to NOW’s calls requesting comment.)

Why is this administration making safety a political issue?

Critics debate the fact that vehicle traffic has been slowed, even though it is clearly not an issue in the Annex or Yorkville sections of Bloor, which remain vibrant shopping (and walking) areas despite the lanes.

Is this (hopefully soon-to-be crosstown) bike lane really something that could be decided by a handful of car-centric suburban councillors, who have historically believed that voting against bike infrastructure will gain them votes in their own wards?

“This continues to be one of the most ambitious cycling projects Toronto has ever attempted,” says bike-friendly Councillor Mike Layton. “We are committed to the long term success of the project and listening to everyone in an effort to see continuous improvements. This is the most studied project in recent history because it’s a complex one.”

Layton notes that “there were a diversity of viewpoints voiced” at the recent open house, but “I believe a majority of participants recognized the value of the bike lane.”

Besides, if all the councillors in the second largest municipality in the GTA can get behind big, bold bike lane projects, why can’t our world-class city do the same?

And really, isn’t that the point of redesigning a street: to make it safer, but also more attractive for pedestrians who want to walk and shop? And if that slows cars down a tiny bit, well, isn’t that kind of the point?

Tammy Thorne is managing editor of dandyhorse magazine. A different version of this story appears at dandyhorsemagazine.com.