“If you film me, I’ll break that fucking phone over your fucking head.”

The uniformed driver patrolling St. James Park in a golf cart is shouting.

Neil McLellan, the target of his threat, recognizes him from a previous encounter, which is why he filmed his latest confrontation on his cellphone. McLellan, who most nights stays at a Salvation Army shelter nearby, says security guards have been regularly threatening homeless people in the park, kicking them awake and banning them from the premises in some cases.

“It’s almost like they own the park,” says McLellan.

Turns out, the guy in the golf cart is an employee of the local St. Lawrence Market BIA, which this summer has hired security to police the neighbourhood, including St. James Park.

“That is the only time we allow third-party security to play a role in our parks.”

Cutler says he’s not aware of any complaints regarding security in St. James Park.

But Yogi Acharya and Ontario Coalition Against Poverty (OCAP) colleague A.J. Withers say they’ve witnessed private security attempting to clear the park of poor and homeless people ahead of 7 o’clock performances and other events in the park, like the Thursday evening movies. Homeless people who have been evicted from the park report security evicting people from public spaces across the street from the park near the Rainbow Cinema.

“In our private conversation with him, the guard admitted to patrolling the park everyday, which is a clear violation of the municipal by-laws,” says Acharya.

An e-mail exchange between OCAP and late councillor Pam McConnell’s Ward 28 office reveals that two weeks after lodging complaints with the city and the St. Lawrence Market BIA, private security were still harassing homeless people and banning them from the park.

Says Withers, “There are other solutions, right? The BIA could have worked with community agencies to have community workers in the park rather than security guards.”

According to McConnell’s constituency assistant Claudia Calabro, the BIA was also told their security guards had no authority to ban people from the park. Weeks later BIA security guards were still on patrol, confiscating posters put up around the park by OCAP warning of stepped-up security and informing homeless people of their rights to refuse eviction. 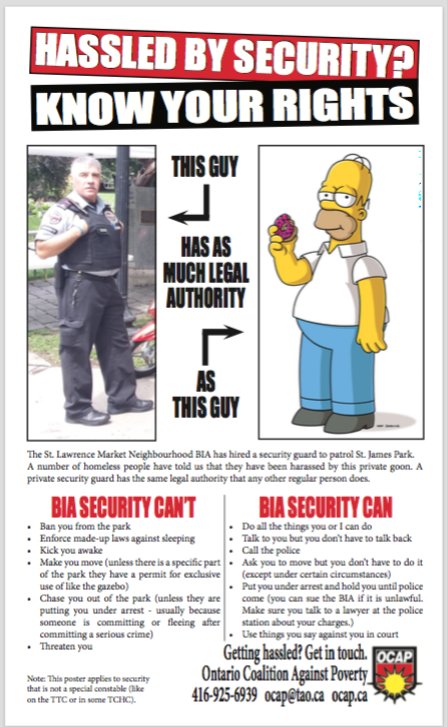 OCAP poster put up around St. James Park to advise homeless people of their rights in the event they’re stopped by private security.

In response, OCAP issued a warning that they would begin to picket BIA member businesses “starting with the ones owned by your board of directors.”

Late last month, city parks manager Cutler reported in an e-mail: “Our staff were informed by the BIA that they will no longer use security in the park, including during their permitted events.”

Asked if complaints from nearby condo dwellers prompted the security clampdown, BIA executive director Al Smith says, “We work very closely with the residential community. We want everyone to have a positive experience in the area. That includes homeless people in the park. It’s not just one set of people.

“We cancelled our entire program, including security at our events,” adds Smith. “We listened to the community.”

Acharya and Withers were in St. James Park recently looking for BIA security presence and say they encountered a city Parks Ambassador ejecting a homeless man from the park for drinking. 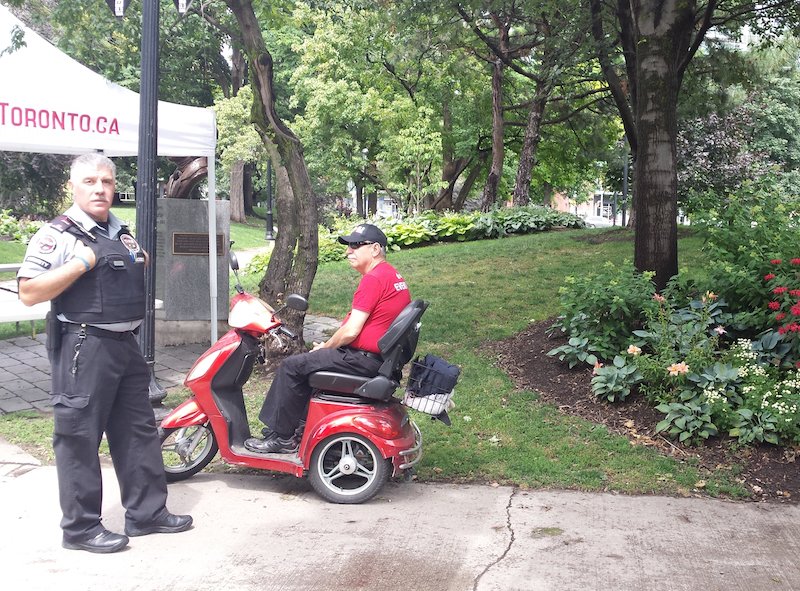 Acharya and Withers say they saw the Parks Ambassador consult with BIA streetscape coordinator Bob Kemp near the gazebo prior to engaging the homeless man. An ambassador supervisor defused the situation by reading out the bylaw and securing a promise from the public drinker to put his beer away.

OCAP posted on its website its concern about what looked like public-private security collaboration: “It is concerning that the Parks Ambassadors are keen on banning homeless park users for violations of city by-laws, but the BIA faces no discipline whatsoever for having publicly acknowledged implementing an illegal patrol of the neighbourhood, which continued for months until OCAP intervened.”

Asked about the incident, Cutler says, “We work closely with all of our neighbourhood stakeholders… to address issues that arise in parks.”

OCAP sees BIA’s capitulation as a victory for poor and homeless people whom Withers calls “the first residents of St. James Park.” OCAP organizers, meanwhile, are vowing to keep up the vigilance and hold the BIA accountable for any future permit violations.