Six things we learned at the Creative Time Summit 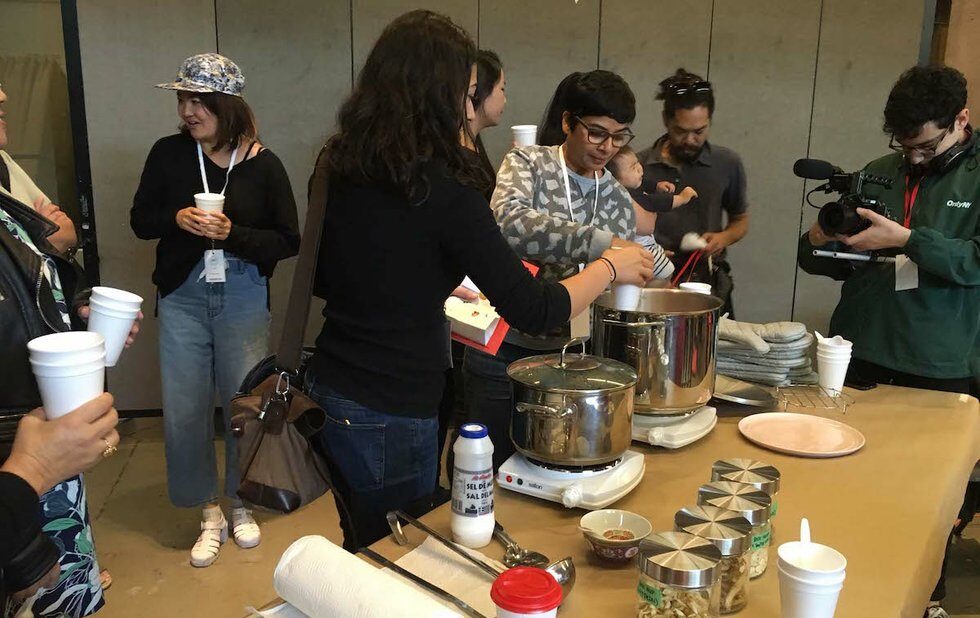 The org is known for putting on art projects outside institutional and gallery settings: Kara Walker’s ASubtlety, a giant sphinx made of sugar exhibited in a Brooklyn warehouse Pedro Reyes’s Doomocracy, a pre-2016-election Halloween horror house Duke Riley’s Fly By Night, a performance by LED-light-equipped pigeons and Pledges Of Allegiance, a series of artist-designed, issue-based flags currently flying over NYC.

Toronto invited Creative Time’s director, Nato Thompson, to curate the City Hall section of Nuit Blanche, a village of shipping containers dubbed A Monument To The Century Of Revolutions. The summit, entitled Of Land And Revolution, served as a two-day intro to the event and to current thinking about art and resistance.

Creative Time has obviously learned how to keep these things running smoothly. At the September 29 plenary sessions at Koerner Hall, an onstage band played a chord or two to signal speakers that their time was up, à la Oscars. Instead of the usual Q&As – so often dominated by pedantic white men – an organizer posed a few questions at the end of each talk. Opportunity for interaction was offered at the workshops held September 30 at the AGO.

Here are some takeaways from the mix of Canadian and international speakers.

1. Don’t get too comfortable congratulating yourself for being here

Although it probably was impossible for us non-academics to understand the complex ideas of keynote speaker Gayatri Chakravorty Spivak from her half-hour talk, the Bengali post-colonial theorist reminded us that systemic change only happens with constant pressuring for social justice, capitalism has learned to turn our opposition into an empty “spectacle of self-declared usefulness,” and festivals and conferences are not revolution.

2. Artists need to come up with work that matches the power of Sylvia McAdam’s presentation

McAdam delivered one of the event’s most incendiary talks, demonstrating how Canada is a world-class oppressor. The nêhiyaw Nation member from Saskatchewan and Idle No More co-founder gave a passionate, to-the-point slide show about the shocking forced labour she endured as a child working alongside other Indigenous people in western Canada’s sugar beet fields and the devastating clear-cutting of boreal forest on her ancestral lands. In her second talk on Saturday she also reminded us to look first to fighting injustices in our own communities and be aware of how women might be upholding our own oppression under patriarchy.

3. Artists must go where the world dares not venture

In his high-energy presentation, delivered through a Spanish translator beneath videos of street performances involving circuses and barbed wire, artist Crack Rodriguez expounded on his philosophy and taught us how to safely step away from an art school desk. In El Salvador, where police and gang violence are a constant – “violence is a business” – and art institutions don’t exist, he works on the street, rejecting institutional knowledge and championing a wildness born of ignorance. “Our only resources,” he says, “are fear and ignorance.”

4. Architecture can be a tool of institutional violence

Undocumented: The Architecture Of Migrant Detention (undocumented.ca) is a graphic novel by Tings Chak published in 2014. In it, the Toronto artist/”abolitionist architect” examines how the anonymous – “also undocumented” – architecture of immigrant detention centres works as a tool of institutional violence. The book’s royalties go to the End Immigrant Detention Network. In her talk she added that incarceration begins in the community when people cooperate with authorities.

5. Indigeneity of the border crossers should be taken into account

Indigenous art collective Postcommodity, represented at the summit by Cristóbal Martínez and Kade L. Twist (third member Raven Chacon could not attend), discussed their Repellent Fence – a 2015 installation of large balloons with an Aboriginal-style eye pattern used to scare birds, which they set in a line perpendicular to the U.S.-Mexico border. The artists made the point that missing from the public discourse is the Indigeneity of the border crossers, who are simply migrating within their ancestral territory.

In their Saturday workshop, as the sweet smell of simmering meat broth with Chinese herbs and papaya wafted over us, members the local artist collective Angry Asian Feminist Gang shared stories about women caring for and protecting communities and how traumatic memories affect the passing on of culture in a diaspora. Then they generously shared the soup, a bag of herbs, their Bring Soup Love zine with a recipe for Sei Mei Tong and a business card for a Chinese herb store. Thank you.