After a decade on Yonge, the 46-year-old comic book shop is finally back on Queen and already taking on a new life in its new space 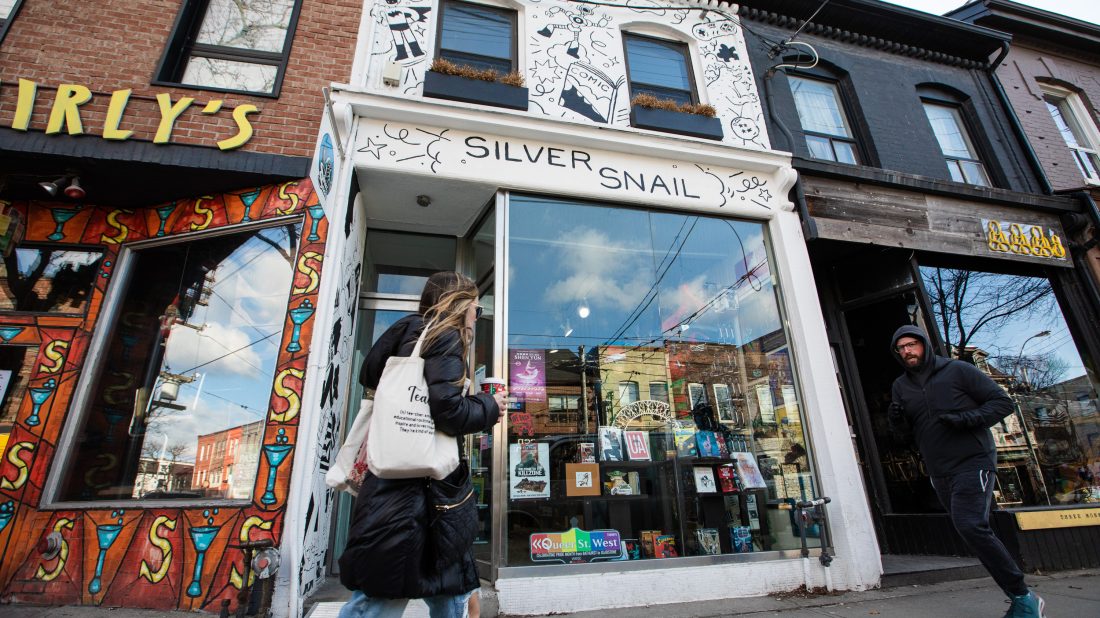 Silver Snail is back where it should be – on Queen Street.

The storied comic book shop has a 46-year history in Toronto, but unless you were specifically seeking it out or had a habit of looking above Five Guys, you might have missed it over the last few years. For nearly a decade, it sat in a second-floor space at Yonge and Dundas that felt less and less visible as the busy downtown neighbourhood’s shops disappeared.

“When we first moved there, Yonge had a lot of independent stores,” says Silver Snail co-owner Brian Hamelin. “There was Hairy Tarantula, 401 Games, there were book stores and record stores, and that was the vibe. Eventually even the HMV next to us closed, and then it was nothing – just the Eaton Centre and pot stores.”

For decades before that Silver Snail was on Queen, and over the last few years Brian Hamelin and his business partner Mark Gingras – who bought the business from previous owner Ron Van Leeuwen after it moved to Yonge – couldn’t shake the feeling that the Silver Snail needed to move back there. Then the pandemic hit and changed everything, so why not start fresh? So they closed up shop and reopened at 809 Queen West, a little bit west of their original Peter Street location.

“For us, it felt like the store belonged on Queen,” says Hamelin. “That’s where everyone associated it, that’s where I associated it. And now we’re getting a lot of customers who come in and say ‘I haven’t been in since you used to be on Queen.’ A lot didn’t follow us to Yonge. Some people didn’t even realize we still existed.”

Silver Snail was still a destination for comic book diehards, with many going every month or couple of weeks to pick up their subscriptions. But there were very few people walking in off the street. Foot traffic might be down because of COVID, but since moving this past summer they have plenty of people drawn in by their first-floor, street-facing window displays or a glimpse of a cool looking action figure.

“There are toys we had for years at the old store and now we can’t keep them on the shelf,” says Hamelin. “Now we have kids coming in with their parents because they saw Batman in the window. It’s fun to sell stuff to excited kids. And they might become lifelong comic book readers like we are.”

Decades of the Simpsons’ character Comic Book Guy and Big Bang Theory’s caricatured portrayals have created a stereotyped conception of comic book nerds, but the fanbase is more varied than ever. There are people who come in like clockwork to collect the latest issues of series they’ve subscribed to; there are intense collectors; there are the aforementioned excited kids; and – more and more since Marvel took over every TV and cinema screen – plenty of casual fans and newbies who might never have stepped foot in a comic book store in the past.

With the new store, Silver Snail can cater to all of them.

“The casual adult comic book reader didn’t used to be a thing,” says Hamelin. “Now there are plenty of people who just read Saga or Y: The Last Man or grab a graphic novel every once in awhile.”

Hamelin cites both the rise of indie publishers like Image Comics and the mainstreaming of comic book culture. One expanding market, he says, is manga.

There’s a “hungry new readership” of young readers in their teens and 20s who might have got into the Japanese comics online or through Netflix’s expanding catalogue of streaming anime adaptations. Demon Slayer is streaming there, for instance, and now Silver Snail is selling $250 box sets of the whole run like hotcakes. For a lot of readers, classic series like Akira are “the benchmark” that show just how good comics can be, Hamelin says.

Superheroes are also more popular than ever, and TV and movies have even started to influence their would-be source material.

“Starting around 2016, there was a big shift where you could start to really tell the two major comic companies [Marvel and DC] were trying to court moviegoing fans to the comics,” Hamelin observes. “The characters started to look and act more like their movie counterparts than the long-term continuity. Even certain characters gained prominence, like Hawkeye is wildly popular now. Even Iron Man was a B-list character for years and years [before the movies].”

That shift changed the whole value of comics. While books from the 60s used to be the most valuable, now first appearances of popular characters from the movies – or ones with speculation that they could become big screen properties soon – are worth a lot more.

Part of that is due to the pandemic. During various periods of lockdown, some people were sitting at home with disposable income and no restaurants or concerts or movie theatres to spend it on. So they got into collecting. Not just comics, but vinyl records, DVDs, sneakers and video games. NFTs are getting all the headlines right now, but there’s still tangible interest in physical media – things you can hold in your hand.

Rediscovering the magic of Silver Snail

Having a more accessible, neighbourhood-embedded storefront helps with that. Though the interest in collecting might have picked up during the pandemic, it hasn’t fully moved online. For all the talk of e-commerce – and even though comics are increasingly available in a digital format (you can even borrow them from the Toronto Public Library on the streaming service Hoopla) – there’s still something about heading to a comic book shop, browsing around and congregating with other enthusiasts.

“We tried getting in full orders and posting them on our website, but there was basically zero interest compared to when you can come in, grab it off the rack, flip through it and look at the art. You can’t get that from just looking at a cover online and adding it to your cart. There’s a fun factor that’s missing there. And we try to stock a lot of books because the art looks cool, or because we like it, not just with the idea that someone has pre-ordered it. That’s what the Snail is more than anything – a place to find and discover stuff.”

Silver Snail is tapped into a number of different local communities, from comic art and illustration to cosplay. Their legendary Snailoween party (on hold since the pandemic started) is proof of that. People go all out with their costumes, sometimes putting in a year-long effort. Hamelin credits that to the customers more than the store, but says they try to make it friendly and accessible enough that creative people of all sorts gravitate there.

For the distinctive black-and-white mural on the outside of the store, they commissioned local artist Yannie Lo and basically gave her carte blanche to treat it like one of her own pieces. That’s different from the old murals, which used licensed Marvel and DC characters, but it fits the ethos Hamelin says they inherited from the long history of the store. Even the layout is similar to what it used to be with the single issues in back, so if you’re buying the new Batman you have to travel past their legendary collection of toys and other merchandise to get there.

“I remember the feeling of coming into the Snail as a kid or a teenager and saying ‘Whoa, this exists?!” Hamelin remembers. “That’s the kind of thing that leads to the lifelong obsession that leads to you growing up and owning a comic book store. We’re hoping we can give people that same experience.”

Toronto Pillars is NOW’s series highlighting long-standing legacy businesses that make the city what it is. Have a suggestion? Email me (select Life from the drop-down).

2 responses to “Toronto Pillars: Silver Snail is back where it belongs”