The upcoming art season is packed with interesting shows, but the biggest hype is around the newly hatched Toronto Biennial of Art, launching at multiple locations on September 21.

A staple in cities internationally (there are over 300 biennials globally), Toronto is a latecomer to the format of a large-scale international art show presented every other year. The curatorial team is led by Candice Hopkins, who was one of the curators for the Canadian effort at this year’s Venice Biennial, the granddaddy of the format (founded in 1895).

Complementing the Biennial is the 14th edition of Nuit Blanche. The always popular all-night event encompasses City Hall, Don Mills and Scarborough’s Civic and Town Centres (added last year), while offering an expanded program at Fort York that extends to the edge of Liberty Village.

Crowds who frequent Nuit Blanche will know what to do at the Biennial: venture out into the city to see it anew as it gets reframed and repurposed by artists’ works. Here is a list of our most-anticipated exhibitions for further art-going in the coming months.

At Art Museum at the University of Toronto (7 Hart House)

Black Canadian artist Bowen is renowned for using archival research to tell stories left out of official histories. For Hart House’s centennial celebrations, she reimagines Carroll Aikins’s play, originally staged there in 1922, which used Indigenous motifs to look at the horrors of war. Bowen has created a film that examines Aikins’s work through dialogue with Indigenous writers and artists.

These simultaneous shows of painting and drawing are by a mid-career and senior artist respectively. Isaac presents a suite of witty black-and-white paintings with urban themes. Much loved artist Giii is self-taught and known for drawings featuring a solitary figure on the page. Recently he surprised fans by branching out with the sparse geometric works presented in this show.

Over the course of 30-odd years, Toronto artist Andison has refined her practice, which focuses on kinetic sculpture and installation. Whereas earlier work has an outright figurative emphasis, Andison more recently is making smart, minimalistic kinetic works that have no less relevance to the body as it is changed by an encounter with artworks. 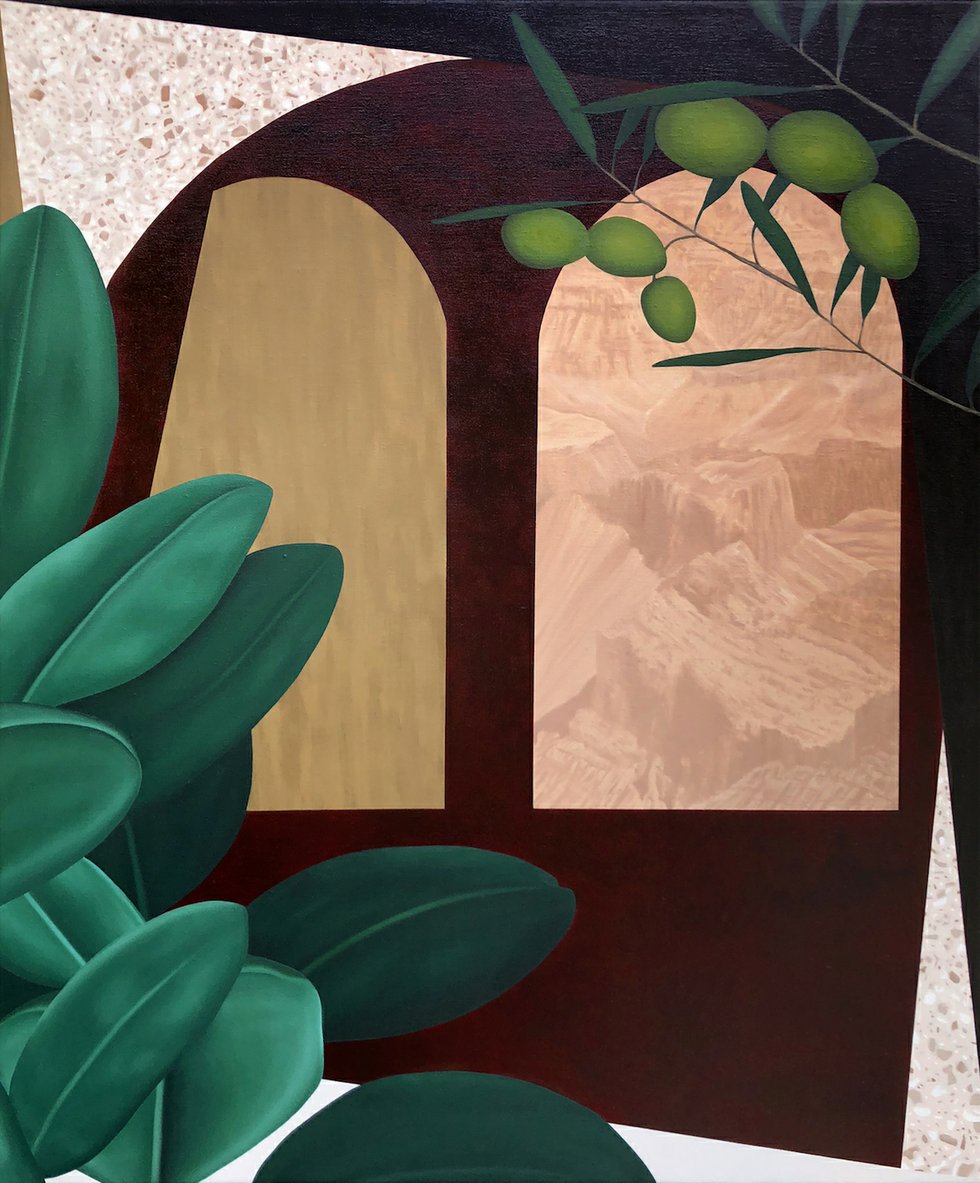 Quaderno 1 (2019), an oil painting on linen by Joani Tremblay, is on display at Zalucky Contemporary from September 13-October 12.

Based in Montreal, Tremblay has built up a thriving international painting career by making effortlessly cool-looking still life abstractions. For her second show with gallerist Juliana Zalucky, the artist is showing a series of works based on her visit to Arcosanti, an experimental eco-architectural community in Arizona.

This sprawling group show sheds light on how domestic lives are in an uneasy relationship with the natural world. Lucy Howe’s melting couches and other deformed furniture sculptures are typical of the ways artists are adept at making everyday things look unfamiliar. Nicolas Fleming adds an extra dimension of strange to this show through a rough-hewn immersive environment that frames the overall exhibition.

259 Lake Shore East and other locations

This milestone art event for the city features a stellar international lineup of artists and an extensive slate of public programs. All events are free, spanning numerous venues – including Riverdale Park and a film program presented at the Cinesphere – along with the show’s massive main venue on Lake Shore East. How we live “in relation” (and also out of sync) is the show’s overarching theme. On view is a procession featuring visiting youth artists from Cape Dorset, Nunavut as well as their banners, costumes and sculptures.

The widely shown multidisciplinary Montreal artist (who is also part of the Biennial) has created an installation that includes 100 small works on paper. Through the intimacy of handmade details, Waheed investigates complex themes like geopolitics and surveillance. These preoccupations, derived in part from a childhood spent in a gated compound in Saudi Arabia, speak to how the complexity of the contemporary world gets filtered through personal experience.

Given the massive crowd that enjoyed the Raptors’ victory parade, it’s fitting that the spirit of that event continues at Nuit Blanche. Artists Bryan Espiritu and Esmaa Mohamoud unveil their sculpture commemorating the team’s 25th anniversary. Other highlights include Daniel Arsham’s luminous monochrome Zen Garden at City Hall, and Drake collaborator Director X, who offers a sequel to his landmark work about environmental destruction from Nuit Blanche in 2016. Presented at the Ontario Science Centre, the installation is on view until January 5. 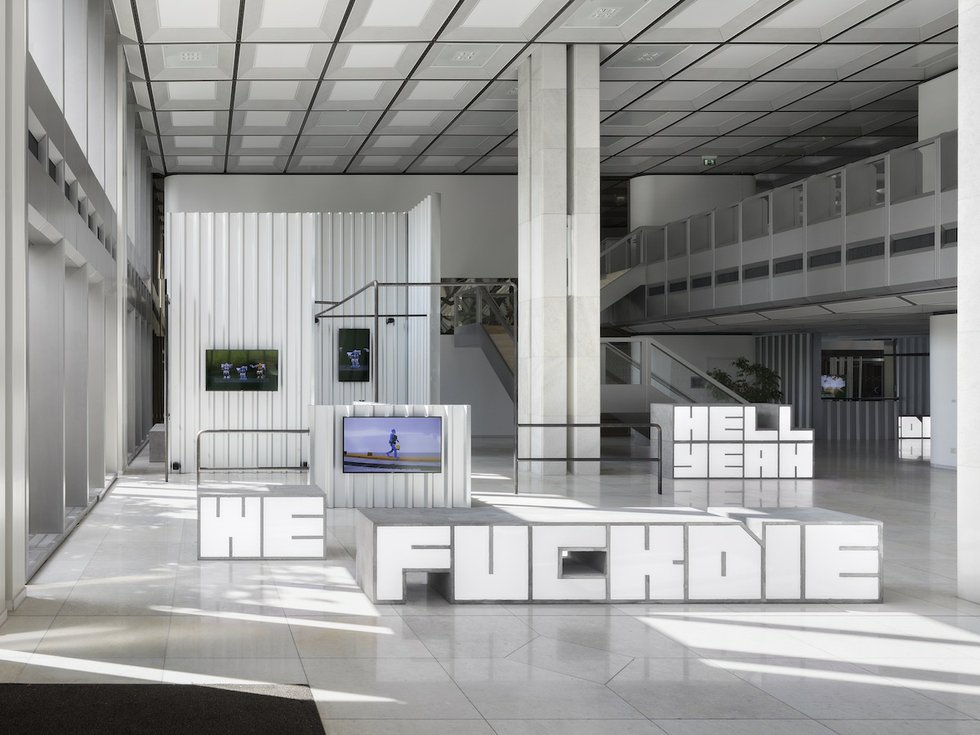 Hito Steyerl’s three-channel video installation HellYeahWeFuckDie (2016) goes on display at the AGO on October 24.

Hito Steyerl, This Is The Future

The AGO hosts celebrated German artist, filmmaker and writer’s first solo show in Canada. Steyerl is known for looking at the production and circulation of images as a way to tell a story about wider issues of global politics, technology and economics. Three of her large-scale works are featured, including HellYeahWeFuckDie (2016), a standout at the Skulptur Projekte Münster 2017. Steyerl chats with critic Brian Droitcour on October 23.

Maryse Larivière, Under the Cave of Winds

The always inventive Larivière has a multi-faceted practice that includes sculpture, collage, performance and writing. For this exhibition, she presents a black-and-white 16mm film featuring a female protagonist held captive at a remote island location. A follow-up to a novel she wrote with the same theme, Larivière sees such scenarios as an analogy for her role as an artist.