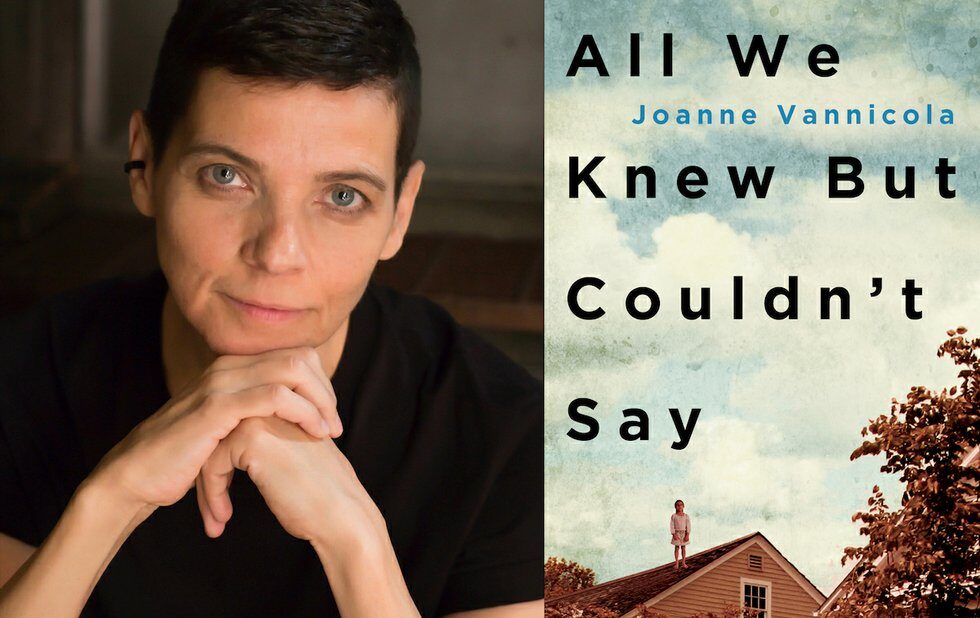 ALL WE KNEW BUT COULDN’T SAY (Dundurn) by Joanne Vannicola. 232 pages. $20. dundurn.com

Joanne Vannicola’s memoir All We Knew But Couldn’t Say is a coming out narrative and a tale of horrific physical and psychological abuse, which is to say it’s a survival story.

Vannicola’s an Emmy-winning actor, most recently seen on CBC’s Street Legal reboot and currently appearing in the self-aware horror series Slasher on Netflix. They’ve also spent years as an advocate for child-abuse survivors and LGBTQ2+ rights and representation in the film and television industry. Their book, released this month, traces the two parallel lines of their early life in short, sharp chapters.

At home, the young Vannicola and their siblings endured years of brutal abuse from their father, while their disturbed mother added an entirely different set of scars. And as a young actor in Montreal and Toronto, Vannicola spent years trying to reconcile their emerging queer non-binary identity with the demands of an industry that had no time for anyone who couldn’t be immediately quantified.

It’s a rough read – tense and grim, its brief chapters packed with awful incidents – but it’s also clearly Vannicola’s way of shaping their own narrative, showing us who came out the other end. Over lunch at Fresh On Bloor on a bright, sunny afternoon, Vannicola is happy to talk about the process.

“I’m getting a little desensitized to my own story now,” Vannicola says with a laugh, “which is I guess possibly a plus. ‘Oh, this again?’ Everybody else is mortified, and I’m like ‘No, really, I’m okay!’”

The book has a cinematic feel to it, framed around Vannicola’s hospital visits to her dying mother in 2003 and flashing back to childhood, adolescence and young adulthood. Introductory paragraphs read like establishing shots, setting us in a place and time before delving into the emotions and mental states.

“I’m an actor, I’m used to screenplays,” Vannicola says. “I had to really learn how to write a book – there’s a lot of practice and effort that went into learning this skill.”

All We Knew But Couldn’t Say is a story about someone figuring out their own identity and claiming it, pushing past layers of abuse, confusion and cultural resistance to define themselves as non-binary long before there was a word for it.

“It rips you apart, because you literally are a ghost. People in your industry don’t see you, or if you know anybody in the industry that’s queer, they’re so closeted,” they explain, which touches on a key section of the book that recounts Vannicola’s two-year affair with a closeted Toronto filmmaker 15 years their senior.

“It hurts so many parts of your being. It messes with your relationships it breaks those down, especially if somebody is closeted. You can’t do anything you can’t celebrate your love publicly. It’s like you’re constantly hiding and living a double life or a secret life. Even when you want to be out and loud and proud because you’re in love, you’re not allowed. Somehow that’s made wrong, and you can’t share that. It just takes a lot away from a person. And I just couldn’t allow that for myself.”

Vannicola founded and chairs outACTRAto, a committee for LGBTQ+ screen performers that’s part of the ACTRA union. They say things are improving for queer people in the industry now, but not nearly fast enough. Before people can feel comfortable being out, they have to feel seen. “Part of our conversation is how do we raise the profile of queer actors,” Vannicola says. “How do we reach producers and directors and writers and people in positions of power to talk to them about authentic representation and bringing us into the casting rooms and writing real parts, right? Casting us for parts that you may not have thought of. Maybe that secretary, or even that love interest. ‘Why are they straight? Why don’t you change it?’ We’re trying to do some of that work, but culturally we’re just at the beginning of that. There aren’t a lot of roles.”

Vannicola says their first time feeling even close to their actual self was their first lesbian role in Denys Arcand’s adaptation of Love And Human Remains, opposite Thomas Gibson and Mia Kirshner in 1993. Even then, the film’s marketing packaged Vannicola as a sexy, seductive femme.

“There was no way anybody wanted to hear what I had to say,” Vannicola says. “That’s how you end careers. I made choices, right? I’m going to be out, and I’m going to dress a certain way, speak a certain way, and that’s who I am. And oftentimes that’s in constant conflict with the mainstream industry. So it meant I didn’t get to work a lot as I matured. At that age where everybody’s objectifying you, I was saying, ‘Fuck you!’” they laugh.

Vannicola never stopped working, spending years doing voice work and taking whatever film and television parts came along: a stint on Being Erica a couple of episodes of Degrassi: The Next Generation an appearance in Ingrid Veninger’s The Animal Project and a key role in Roland Emmerich’s ill-fated Stonewall.

Last year, as the conversation around sexuality, gender fluidity and representation started to clarify, Vannicola was cast in a non-binary role in CBC’s Street Legal reboot with a road map towards giving them a major storyline in the second season.

“And then the show got cancelled, so that character didn’t have a chance to get developed,” Vannicola sighs, “which is really really sad, because that was the goal.”

The Street Legal situation was an attempt at “building a proper, authentic character” as opposed to just dropping a trans or non-binary actor into the background, which we’re starting to see in network shows.

“That’s a problem culturally, for sure,” Vannicola says. “Queer actors need to work, and it’s a really hard place to be in you need the work, but also you don’t want to be tokenized or taken advantage of. That happens a lot, and it’s very hard to say no to a job. But this is the conversation we’re trying to change.”

It’s a constant uphill battle, and one that’s being met with an ugly reaction: we’re speaking just days after a gang of teens attacked two gay women on a London bus, and after a band of Nazis crashed the Pride parade in Detroit.

“What we’re seeing politically and culturally, it’s all connected,” Vannicola says. “The rise of hatred and the rise of violence is the backlash to all of us speaking out and rising up, and wanting our rights and demanding equity and parity – and don’t fucking rape us, and don’t beat us if we’re Black or queer. You don’t have a right to do that and we have a right to exist just as much as you. We have a right to employment and housing and all of these things, and I think because we’re stronger – you know, we’ve been around for a long time and we’re gaining rights and access – that the backlash is really fierce.”

I ask Vannicola if they themselves feel stronger. Their answer is an immediate yes.

“I’m still a little loopy,” Vannicola says. “Most survivors have particular issues now and then, but I think all humans do. Whether it’s violence or you’re marginalized from your community or you’re queer or whatever the issues are, we all have a certain amount of baggage. I feel like I’m a pretty strong person. That’s the one thing I’ve come to understand about this, is that I am resilient. I’m certainly more open than I’ve ever been.

“That’s the gift of writing a book like this, too: you reveal so much of yourself in a memoir, and you get to do good things with it. That’s really my goal.”