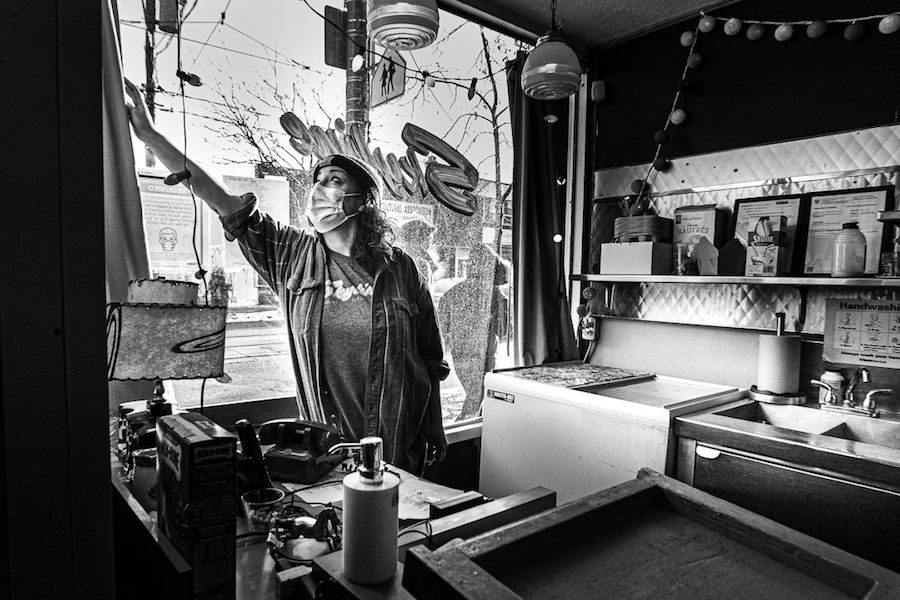 When Toronto restaurants went back into lockdown last November, Antler co-owner Jody Shapiro knew what he was getting into.

So, he picked up his camera.

Then, as pandemic restrictions began to ease, Antler did the pivot from fine dining, rejigged the menu for takeout, opened a bottle shop, published a cookbook and began selling meal kits and merch. He’s since re-hired five or six employees, but obviously the business feels totally different.

“The kitchen wasn’t a hub of activity anymore,” he says. “It was more focused on taking care of the inventory and reinventing things for a new menu.”

Taking photos became a form of therapy, and as he began posting wide-angle, black-and-white shots on Instagram, he eventually connected with 12 restaurants and two bakeries, largely concentrated on Dundas West, including Uncle Mikey’s, Hawk & Chick and The Federal.

He’s now selling prints as part of Lockdown 2.0, an online exhibition and fundraiser for the lobby group Save Hospitality and non-profit The Full Plate via virtual gallery FFOTO. The photos are also on display in the window of Stephen Bulger Gallery (1356 Dundas West).

“I like to think I’m a creative person, but all my time has been in front of the computer dealing with online ordering systems,” he says. “I wanted to document this scenario.”

Many of the images feel solemn, with masked people either alone in the centre of the frame or distanced from one or two colleagues.

“It’s a time of solitude right now,” Shapiro says, adding that four or five restaurants into the project a pattern emerged: “the anonymous nature of the people working in the restaurants.

“Everybody that I photographed was wearing a mask,” he explains. “Most people were either prepping or getting something ready so their faces are down. Suddenly I realized, wow, it’s hard to recognize who is a chef, who’s a manager and who’s a server. Everybody’s role has to pivot in some way to survive.”

The images also illustrate how some Toronto restaurants have drastically changed their business models in response to the pandemic.

One shot shows Uncle Mikey’s owner Michael Kim standing in the centre of his space, now transformed into a Korean bodega at Dundas and Brock. He’s illuminated mostly by the light of a large, glowing fridge inhabiting the former dining area.

Further east at Queen West on Tecumseth, Beast’s Scott Vivian also removed all the tables and transformed his carnivore-centric outfit into a bodega and bottle shop. Once a city-wide dining destination, the restaurant has gone local.

Shapiro sees this images as both scary and hopeful. On the one hand, he says, restauraneurs “now have the facility to grow our experience in other ways that we never had before.

“I hope it expands what we do,” he says.

But completely changing a business model is huge commitment, and whether Toronto restaurants that have reinvented will want – or be able – to reopen as what they were before the pandemic remains an open question.

“From a business owner point of view, that’s a big change,” Shapiro says. “That’s not something you do over night and switch back lightly.”

Labora chef Rob Bragagnolo and his wife Caroline are now in business together thanks to the pandemic.

Other photos capture how restaurants that were once large-scale operations have morphed into intimate, family affairs.

Spanish restaurant Labora was a King West dining destination in the before times with seating capacity for close to 100 diners. Shapiro’s photo shows how chef Rob Bragagnolo is now running the place with help from his wife Caroline, who wasn’t working in the culinary sector prior to COVID.

Over in Parkdale, Shapiro photographed Skyline Restaurant co-owner Maggie Ruhl, who made the decision to close for two months after New Year’s as COVID-19 cases surged upward. In late February, the diner’s Christmas display had yet to be disassembled.

Ultimately, Shapiro plans to reopen Antler as a full-scale restaurant as soon as it’s safe to do so. In the meantime, he’s registering for the city’s patio program CafeTO and evolving the business.

“I hope to look back at these photos in 15 years and see what this period brought about,” he says. “A lot of people are re-evaluating how the industry works, how employment works. I really think there’s going to be some interesting and hopefully positive changes that build out of it.”