Review: Moby: A Whale Of A Tale

Family-friendly version of Melville's Moby Dick uses songs, a real creaking ship and the sounds of water to make a splash 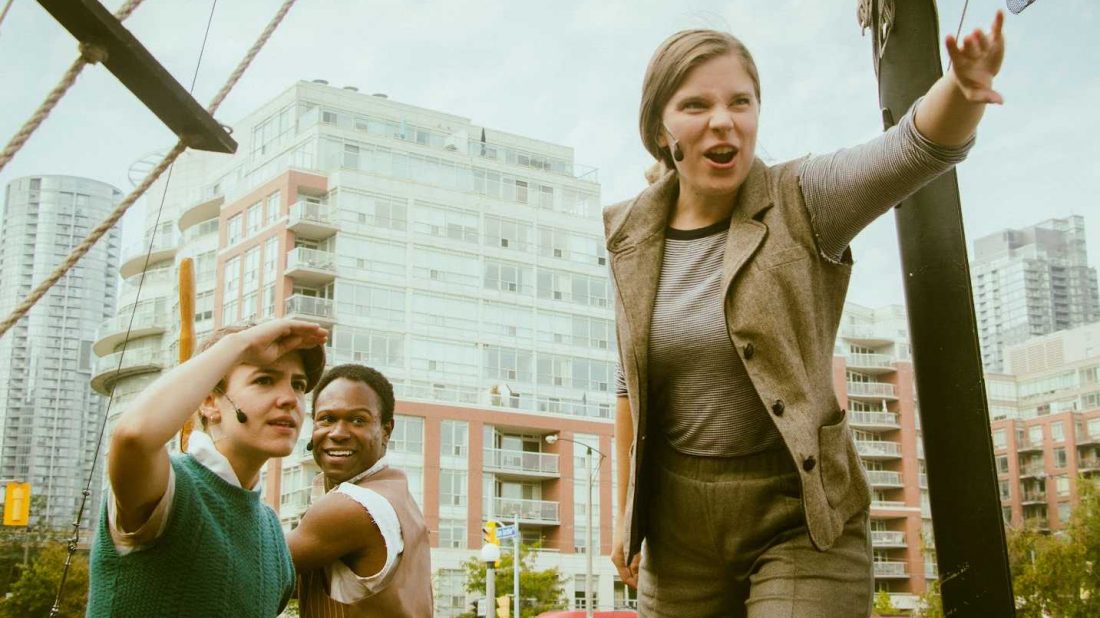 Annie Tuma (left), Jamar Adams-Thompson and Lena Maripuu have a whale of a time.

If you’ve felt landlocked during the pandemic, head down to Harbourfront to experience Moby: A Whale Of A Tale. This show with music might not offer the deepest interpretation of Herman Melville’s epic tale, but it does provide 75 minutes of family-friendly nautical entertainment.

Lena Maripuu and Annie Tuma’s adaptation takes place on the Pirate Life ship at the foot of Dan Leckie. Audiences are seated on an adjoining dock, and while the occasional sounds of dogs, passersby and planes flying in and out of Billy Bishop Airport might be distracting, the sensation of water lapping against the dock goes a long way towards convincing you you’re out at sea.

The story is familiar. While the whaling ship the Pequod is docked in Nantucket, Ishmael (Tuma) joins first mate Starbuck (Maripuu), ace harpooner Queequeg (Jamar Adams-Thompson) and the mysterious Captain Ahab (Amaka Umeh), who are about to ship out. Their goal is to kill whales for their blubber – a popular energy source in the 19th century. But soon it becomes clear that Ahab is merely interested in tracking down Moby Dick, the huge white whale that left her with a peg leg.

Director Alex Montagnese’s production benefits from the stage business in and around the sturdy Pirate Life ship itself and from the musicians the Moonfruits (Alex Millaire and Kaitlin Milroy), who play everything from salty sea shanties and drinking songs to mournful, atonal sounds that evoke danger or menace. One particularly catchy song (all of which are by the Moonfruits, Maripuu and Tuma) concerns whale blubber, and we’re encouraged to sing along to it.

While Tuma’s Ishmael isn’t sufficiently fleshed out, Maripuu’s Starbuck becomes a poignant and sympathetic figure, as we watch her write letters to her daughter, whom she hasn’t seen in three years – very relatable during a pandemic. Best is Umeh’s magnetic, maniacal Ahab, who gets more unmoored as the voyage continues.

I won’t give away any details, but the ending of the show – like the novel – is highly imaginative and makes a big splash.