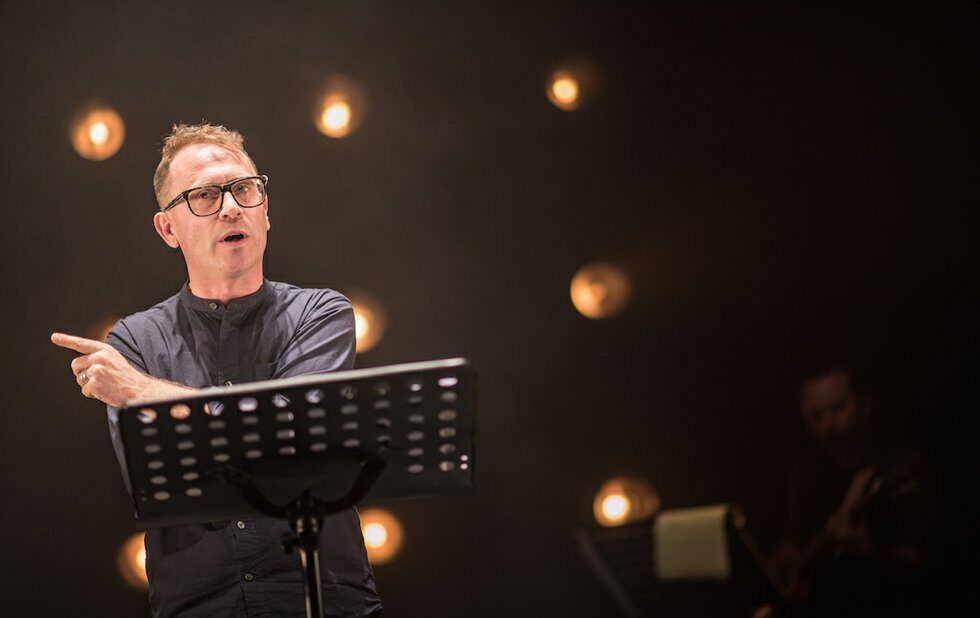 Anyone whos seen Torquil Campbell perform with his band Stars knows the dude is theatrical sometimes to a fault.

The reason for this, it turns out, is that he grew up in a storied Canadian theatre family, studied acting and performed onstage for years before building a different career and winning fame on the Arts & Crafts track of the indie rock circuit.

After a long absence, he returns to his theatre roots with an intriguing solo piece that blends compelling true crime with revealing autobiography, turning the tale of his obsession with imprisoned German con artist Christian Gerhartsreiter who for many years successfully faked being a member of the wealthy Rockefeller family into a reintroduction of this side of himself: Torquil Campbell, actor.

He quickly demonstrates impressive acting chops, proving himself a funny, engaging raconteur and performer as well as a talented writer. (No one will heckle, Dont quit your day job!)

With direction by co-writer Chris Abraham (of whom Campbell does a hilarious impression), he takes a storytelling approach, eschewing set and props, to weave together his own experience growing up the son of famous stage actor Douglas Campbell and Gerhartsreiters exploits in the U.S. under assumed identities and his eventual murder conviction in California.

The Gerhartsreiter story, set to breezy yet poignant guitar accompaniment by Julian Brown, isnt straightforward, so its helpful, although not necessary, to familiarize yourself with the lurid details and theories beforehand.

What brings the two tales together, and what Campbell brings to the Gerhartsreiter/Clark Rockefeller saga that isnt already covered in the cottage industry of made-for-TV movies, crime documentaries, fiction and non-fiction books and cold-case podcasts, are his own attempts to correspond with and interview Gerhartsreiter, and his ethical hand-wringing over maybe meeting a murderer.

In the culminating dramatized prison interviews, when Campbell plays both himself and a spot-on Gerhartsreiter (to whom he bears a strong resemblance), the show becomes much more than sensational murder media.

Campbells biting, playful self-scrutiny turns the play into a meta-narrative about the constructed nature of identity, extreme vanity, narcissism and the power of alternative facts.