From ramen to pho to bisque and more, these spots have the cure for the cold-weather blues 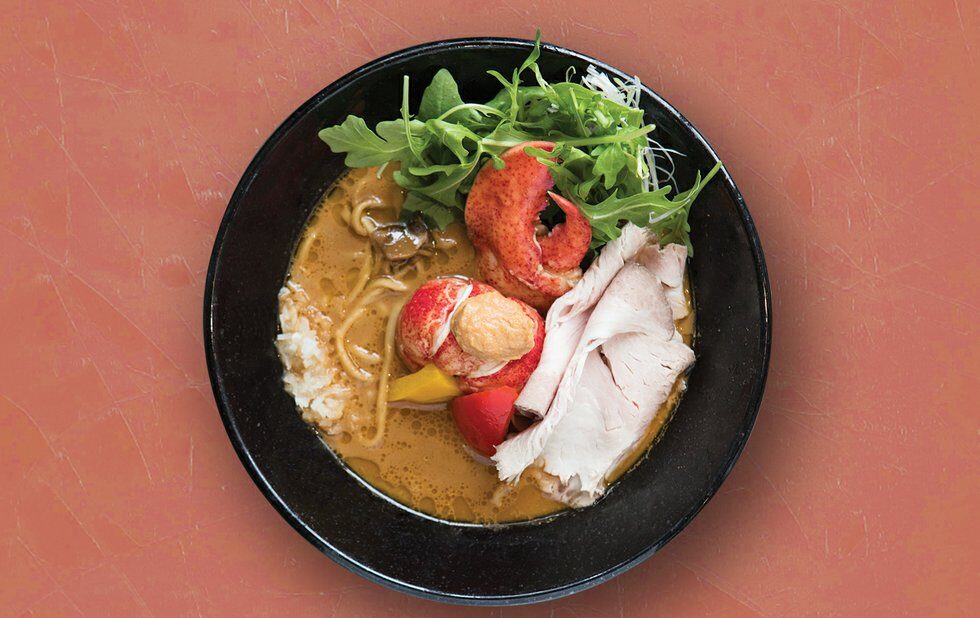 Too often, we overlook the humble soup: it’s just a side, or a daily special or a way to use up a fridge’s worth of past-its-prime produce. But when done right, it’s culinary alchemy at its finest – take seemingly disparate ingredients, pitch ’em in a pot and make magic.

It’s also a staple for budget-conscious diners. (These days, five bucks will barely get you a look from the waiter at many Toronto restaurants, but it’ll score you nearly half the soups on this list.)

And due to soup’s prevalence in countless home kitchens around the globe, it delivers comfort and nostalgia in a way that no other food can. As One Love Vegetarian owner Ikeila Wright puts it, “Soup is international. Everyone – every culture – drinks soup. Some soup is thin, some soup is thick, some soup is cold, some soup is hot – but there’s always some loving memory of something in a soup.” 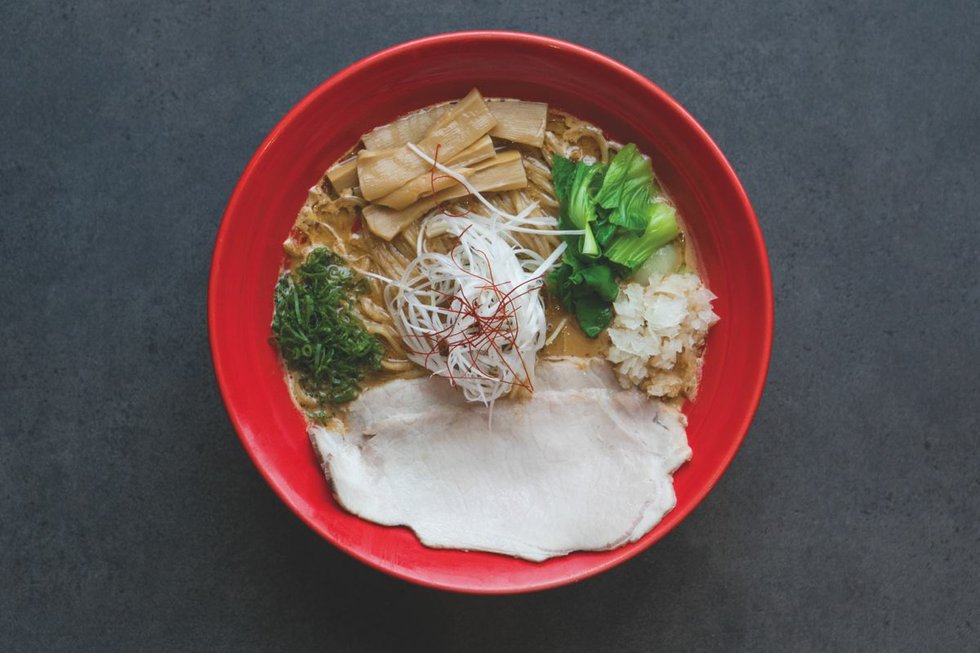 What better cover star for our guide to Toronto’s best soups than the most opulent ramen in town? Konjiki’s lobster ramen ($28) is the Beyoncé of noodle soups, with a suitably exclusive pedigree: it’s only served on Wednesday evenings, and only at the chain’s North York location. But it’s worth trying at least once – as much for the velvety broth (laced with lobster cream reduction and mushroom oil) as for the entire lobster claw and tail floating serenely within it. Not enough room in the ramen budget? Equally worthwhile options include their signature clam broth with porcini and truffle – the one that earned their Japanese locations a Michelin star – or a brand-new spicy miso ($14) version that’s served as a twice-weekly special. 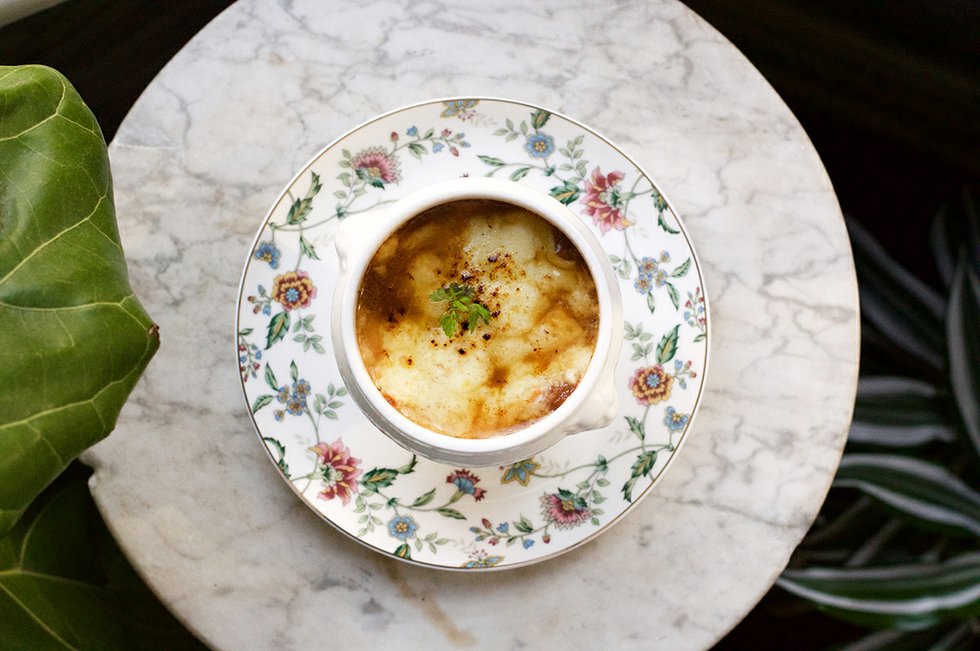 The French onion soup ($15) at O&B’s new Sherbourne bistro is a top seller, and with very, very good reason. A mix of two recipes chef John Horne picked up while working in Europe, the soup is a two-day project for Selby’s kitchen the chicken stock is simmered for a full 24 hours, then merged over another full day with jammy, sweet onions slow-simmered in cognac and port. The result is a multi-layered, slightly boozy concoction, topped with a Gruyère cheese-curd blend that ensures your cheese pulls will be both impressive in scope and delicious in flavour. 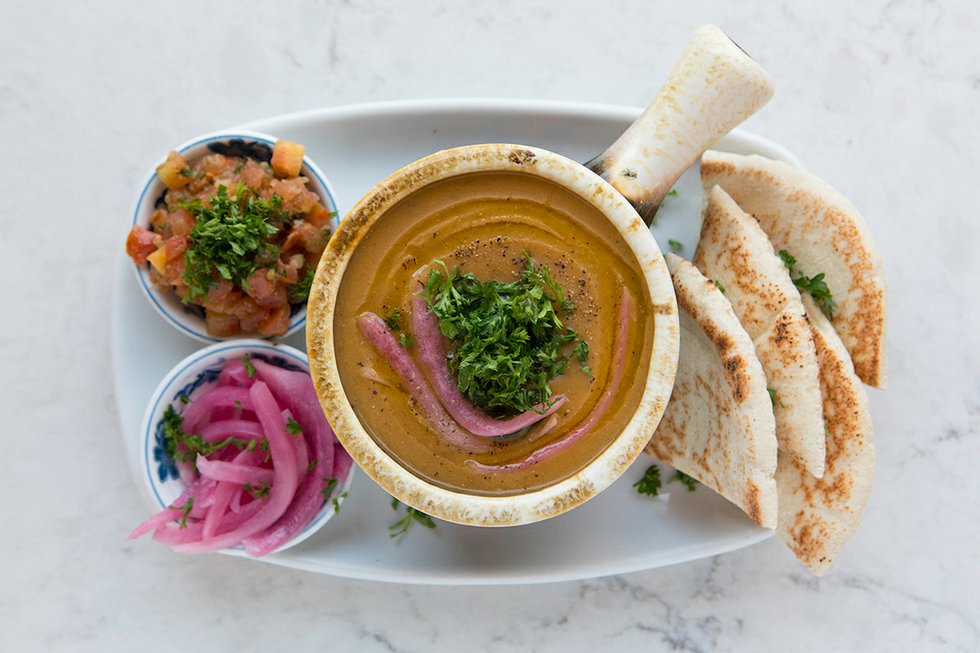 At this point, the east-end Egyptian kitchen Maha Barsoom runs with her kids Mark and Monika has its share of claims to fame: the “mind blowing” chicken sandwich, the fried-shrimp Pharaoh’s Po’ Boy, the platter with falafel and foole, the cardamom lattes, the bonkers wait times for all of the above. But Barsoom’s lentil soup ($8 for a cup, $11 for a bowl) was the thing that started it all – it won the chef a cooking contest not long after she moved to Canada nearly two decades ago. The elixir in question, made from veggies, garlic, cumin and cardamom, is smooth, velvety and 100 per cent vegan, topped with pickled onions that add a puckery punch. It’s the perfect complement to a date-stuffed grilled cheese. (Oh yeah, those are amazing too.)

Read our full profile of Maha’s. 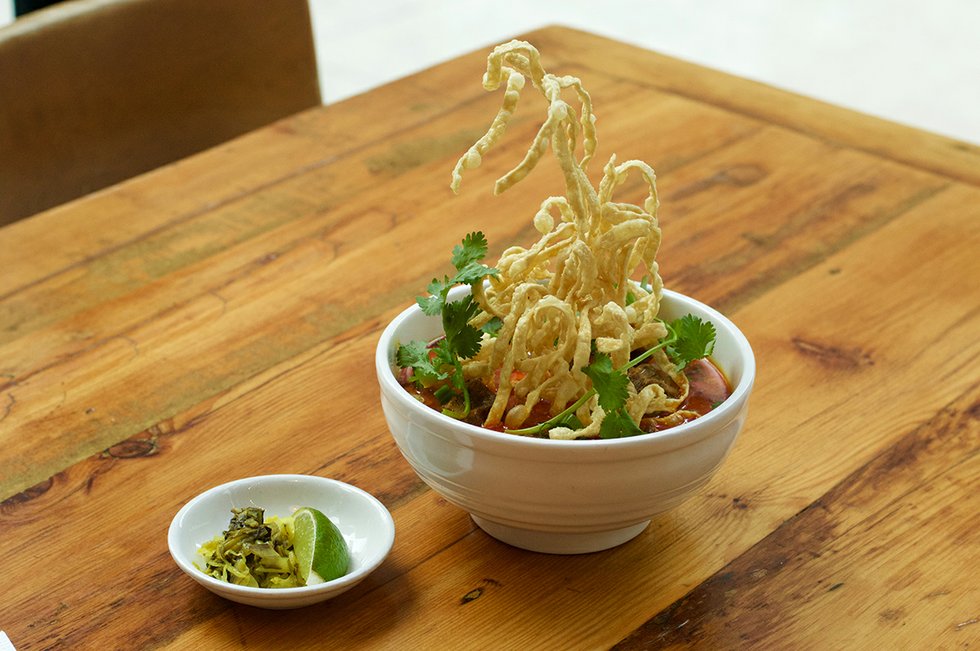 What lies at the bottom of the bowl in KSR’s unearthly khao soi ($14.95 lunch, $17.50 dinner) rides the line between a broth and a gravy the mix of imported golden curry paste and coconut milk bathing the fresh egg noodles is undeniably rich and dense, but you’ll still spoon it all straight into your mouth anyway. Pick chicken, tofu, beef (add $1) or shrimp ($2), then dig it all out from under the forest-like tangle of crispy-fried egg noodles that the kitchen piles high into the space above the bowl. Lime wedges and pickled greens add a blast of acid. 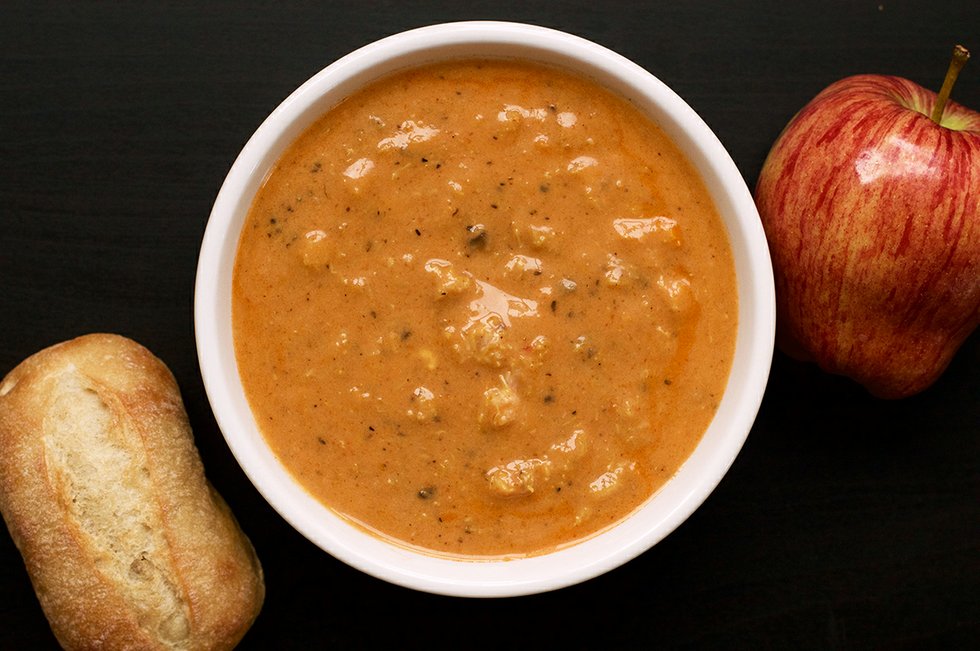 Named (kind of) for the iconically militant Seinfeld character, this PATH-based mini-chain of soup counters has a loyal following among downtown desk jockeys. (One pal even says that after she got a job at Yonge and Bloor, she’d organize cab caravans down to the Financial District to get everyone at the office their soup fix.) There are winners all over the Soup Nutsy’s rotating menu of specialties, from West African Senegalese peanut chicken to Mediterranean orzo and lentil (heck, even the “Vegetable Miracle Diet Soup” is pretty good). My personal pick, though, is the Jamaican crab bisque ($9.59-$11.59 with two sides), a piquant cream soup redolent with chunks of crabmeat that’s just rich enough to satisfy without sitting heavy after lunch. Yes soup for you! 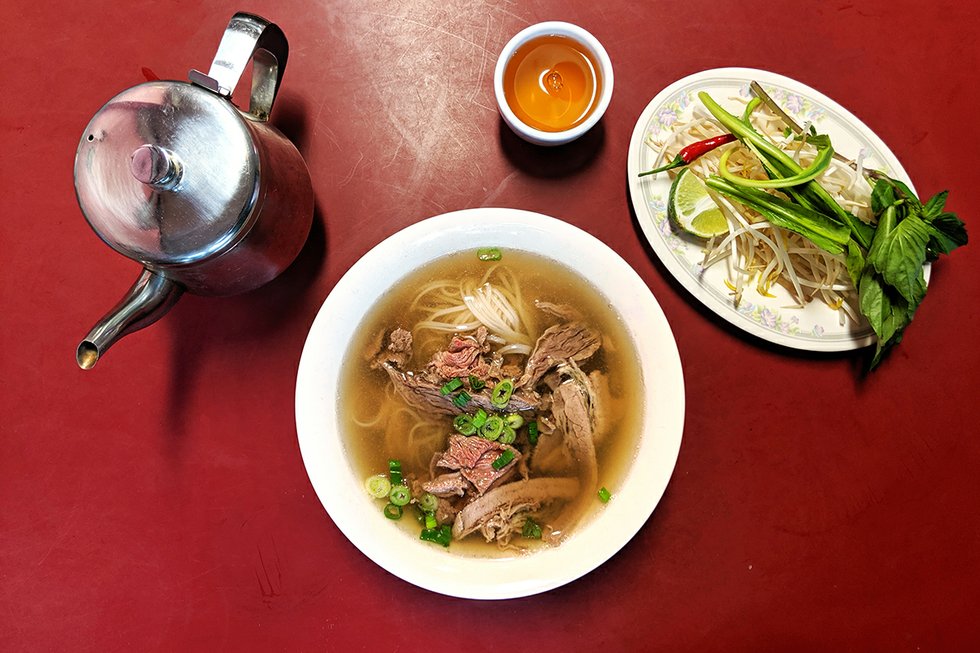 Up the street, the slightly more glam Golden Turtle has its share of fans – but we thought we’d give some love to its Ossington rival, a spot where the candy-coloured walls, ancient press clippings and The Grid newspaper rack (!) haven’t changed in eons. Neither has its pho recipe, which pairs a salty-sweet broth (ready for dressing with hoisin and Sriracha, not that it needs it) with ample choices for cow-based fixings our pick is the tender rare beef with brisket ($10-$12.25). Little wonder the diehards start flowing in the second the sun starts to dim on a late fall afternoon. “I LOVE PHO FOREVER,” the mural reads, and so do we. 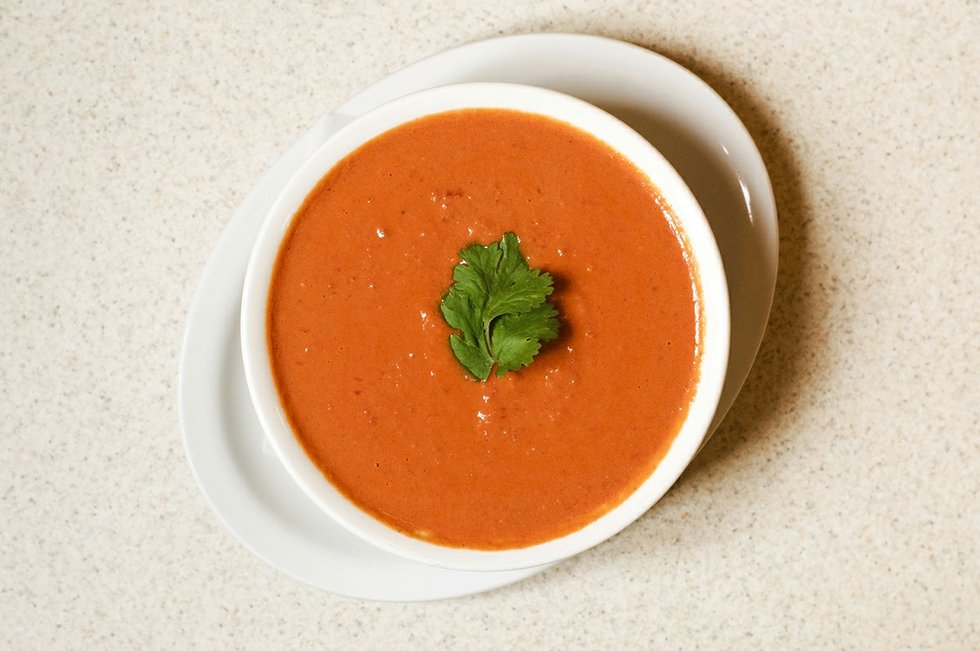 This social enterprise, ensconced in a church beside the Eaton Centre, is steps from the mall’s glitzy top floor, but feels like a world away. The café acts as a refuge for both its program clients – adults recovering from or living with mental illness – and anyone looking for a friendly face and a great meal. Though their soups change, their Moroccan tomato peanut soup ($4.80-$5.25) is offered every day. (Staff say they’d never hear the end of it if they took it off the menu.) Though entirely vegan, it’s impressively flavourful and shockingly filling one cup, with its attendant slice of fluffy bread, ought to hold you all afternoon. (Pro tip: If you really can’t decide between the day’s soups, they’ll happily let you mix ’em.) 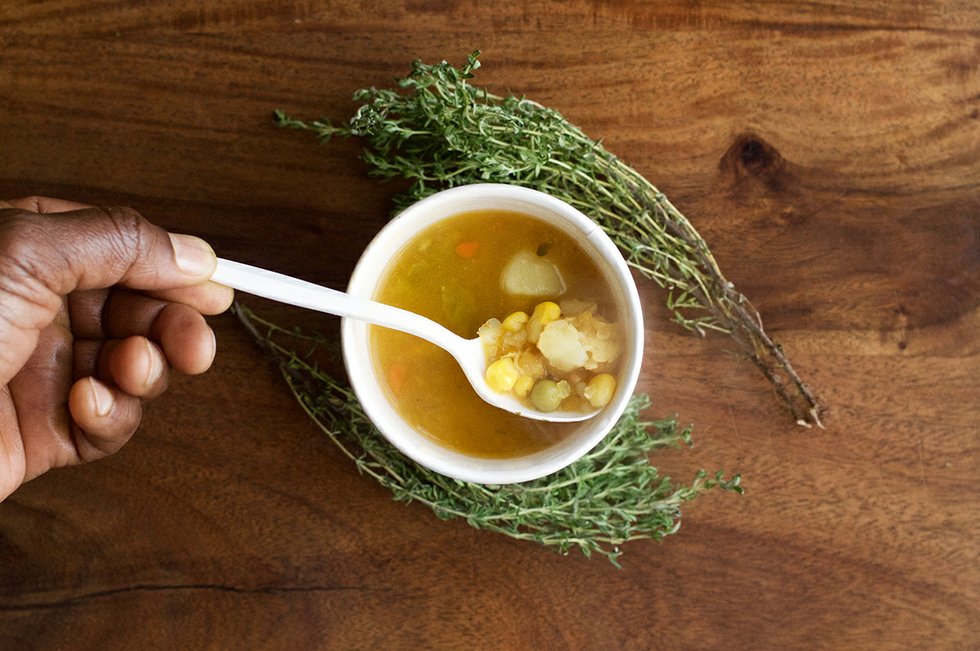 The legend of One Love corn soup ($5-$7) goes like this: Ikeila Wright and her then-husband were selling boiled Jamaican corn at festivals when people started asking for cups of the spiced water. That was a hot commodity at their outdoor stand, so they started charging for it, mostly to get people off their backs. Eventually, customers (naturally) started complaining there wasn’t enough stuff in the water and began offering suggestions. The couple added everyone’s suggested veggies and herbs, gave it a name and a sensation was born. That humble recipe took them to a stand at the Harbourfront, countless music festivals (including being personally headhunted by a Virgin Records bigwig to vend at a rock fest featuring a reunited Smashing Pumpkins) and even a Food Network feature. It’s easy to see why: punched up with Jamaican thyme and full of corn, potato and buttery pumpkin, it’s the kind of soup that tastes like home, no matter where you’re from. 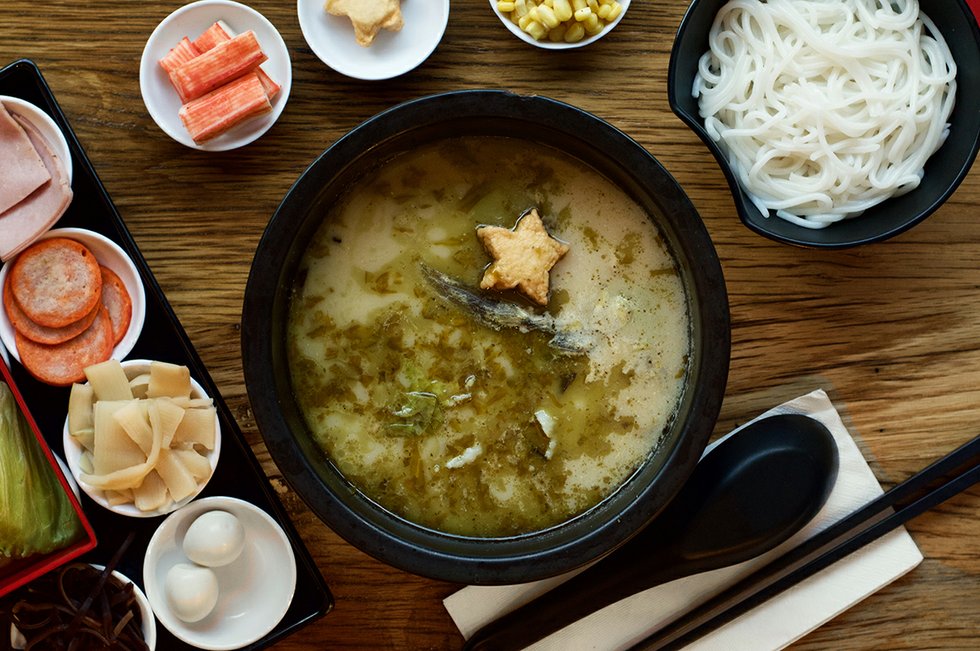 The colder the air outside, the wilder the crowds inside this noodle joint, which is widely popular in its native China and now boasts four GTA locations (two more are on the way). That’s largely because their pork bone broth soups, which feature unlimited noodles and myriad available toppings, are served still-boiling as they reach your seat. (There’s even a big, red warning note affixed permanently to every table.) There’s an option for every palate, from tomato to mushroom to a seriously-not-kidding-around spicy broth, but I’m partial to the pickled cabbage noodle soup ($11.99), done up with a hearty scoop of the minced green stuff for a sour, herbal flavour bomb, plus big chunks of tender basa. 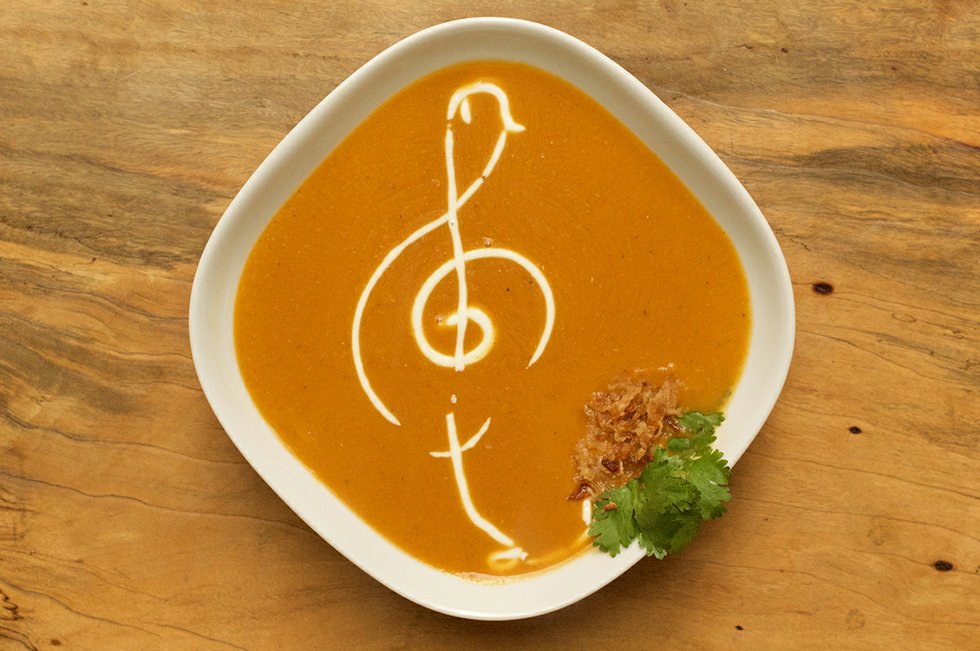 This miniature chain has been locally synonymous with soup for well over a decade thanks to the recipes of founder Ravi Kanagarajah, who died in 2013 at age 42 of a stroke. The chef’s creations are still beloved around the city, with diners and takeout customers showing up in droves at the downtown location like clockwork every day before lunchtime. Among the greatest hits: chicken hot pot ($10.99), a gently coconutty broth stocked with shreds of chicken, bok choy, pineapple and noodles, or the sweet and tangy apricot lentil ($10.49). No word on how much of that traffic is actually due to the cheddar biscuit with red pepper jelly that accompanies each soup order. 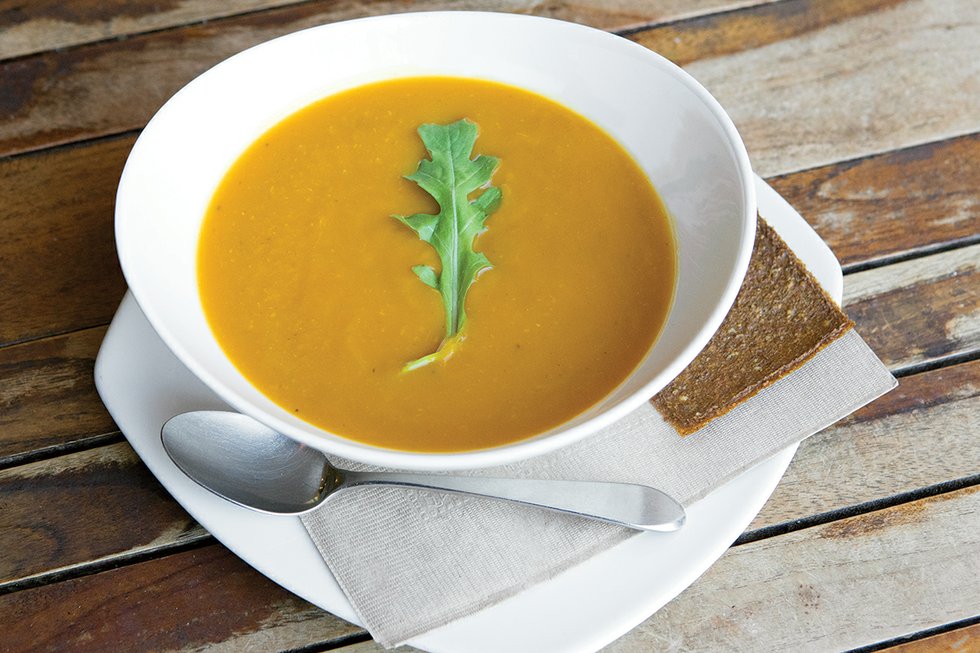 A favourite destination for Toronto herbivores since 2007, this low-key Kensington café keeps things vegetarian, organic and gluten-free. The menu always features at least one soup or stew ($5-$6.50) that shows off the bounty of nature in fresh, flavourful fashion. Staples include butternut squash and ginger or lentil with turmeric and lime. Get a bowl by itself (with an accompanying raw cracker, ready for dunking) or as a side with the signature 42-ingredient salad or buckwheat crêpes. 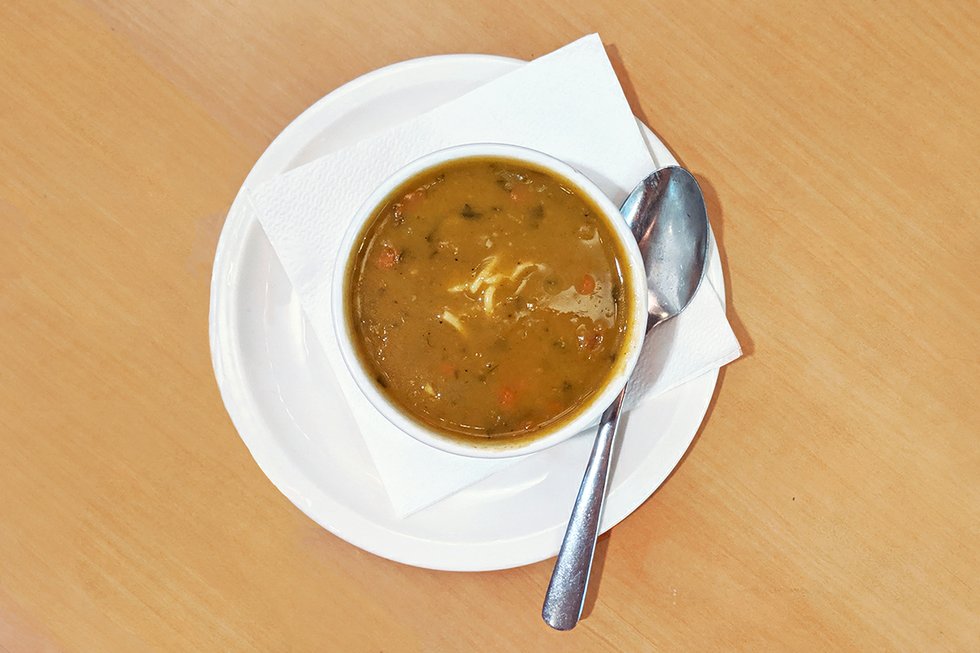 The split pea soup ($3.99-$4.99) at this uptown dairy restaurant is, as one pal said while I was researching this story, “basically its own religion at this point.” Based on a recipe handed down through founder Aaron Ladovsky’s family for generations, this dense brew is a mix of peas, carrots, celery and onion, with a sprinkling of dill and a few thin squiggles of egg noodle. You might find more aggressively flavoured soups on this list, but few are as uniquely comforting as this one. 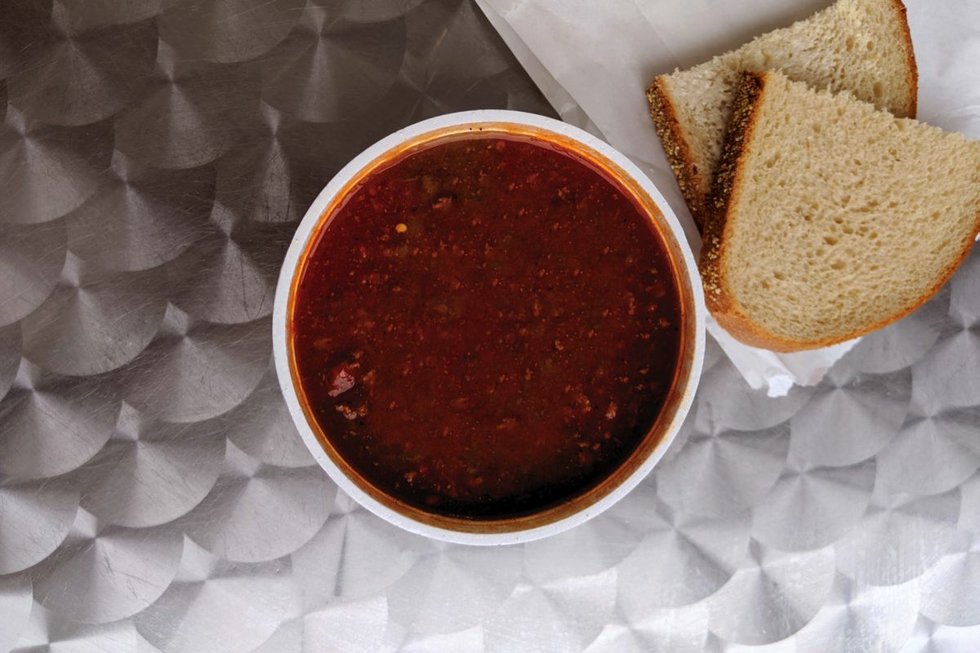 The Mink Mile seems to get fancier by the week, but a few steps away in Cumberland Mall, where it’s seemingly always 1990, a few low-key local eateries are still hanging on. The most beloved of these might be Esther, Queen of Soups, a corner stall where Esther Joseph has been slinging bowls for over 20 years. (She also runs Sri Lankan spot Ceylon Spice downstairs.) The seven or so soups (starting at $4.25) on offer change daily, but they’re often vegetarian, and always dairy-free. The mulligatawny soup and split pea are among her signatures, but if those run out – and they will – the chili is also a good bet.