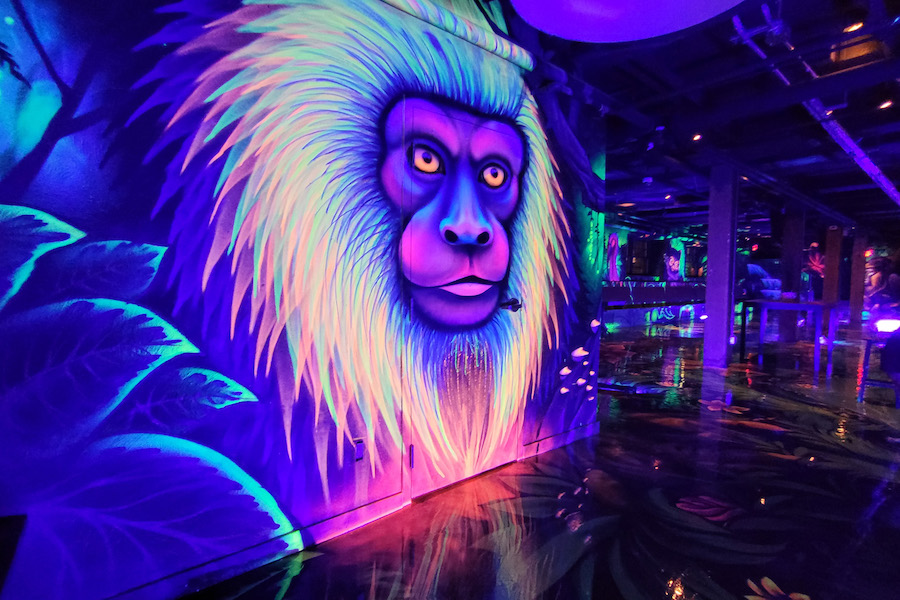 The pandemic: it’s been a time to reflect, take stock of where you’re at in life. Maybe quit your job, try a new hobby or get the hell out of town.

Unless you’re in the restaurant business.

“I had lot of friends who escaped to places like Costa Rica and Mexico,” says Oliver Geddes, co-owner of Toronto restaurant company the Fifth. “Most people can’t afford to do that. I couldn’t leave because I have kids and these businesses that were potentially going out of business.”

It’s been 19 long months of ever-changing COVID rules and regulations for the city’s eateries and watering holes, which can finally go back at full capacity as of October 25.

The Fifth has been one of the more ambitious companies during that time. Geddes teamed with the Ballroom and brewery Collective Arts to transform a vacant Richmond Street parking lot into the sprawling patio RendezViews for the past two summers. Now he’s moving back indoors with a similarly artful resto-bar: Selva, a jungle-themed, UV-lit subterranean space designed to appeal to Torontonians like himself with unfulfilled vacation fantasies.

“The idea was born out of escapism,” he says.

The walls and floors at Selva – the word for jungle in Spanish and Brazilian Portuguese – are covered in psychedelic rainforest murals by Clandestinos, aka artist couple Shalak Attack and Bruno Smoky, who helped bring RendezViews to life and recently painted a mural on Wilson subway station.

Of course, the imagery translates well on social media so Geddes is already receiving requests for event bookings. Reservations opened on October 24 and the restaurant opens on November 3.

Similar to RendezViews, he’s hoping to host TIFF parties, corporate events, drag brunches and many other events. But right now the priority is just getting open.

Located at 221 Richmond at Duncan in the former home of the Fifth steak house, the space has a massive capacity of 520 people, but with tables it will seat around 100. There will be eight cocktails on tap as well as 18 beers, including eight to 10 craft options from Collective Arts.

The location proved fortuitous for another reason. It’s a few doors away from Pai, the popular Thai spot run by prolific restaurateurs Nuit and Jeff Regular. After Geddes’s barbecue was stolen from his laneway patio in July 2020, he was walking around the block and saw a huge takeout line outside Pai. He approached the general manager and asked if the restaurant would supply food while he sorted out his plan B.

That led to a collaboration with the Regulars at RendezViews. Over the summer, he invited Chef Nuit Regular to check out the artwork-in-progress at Selva.

“That’s when I found out that she had been experimenting with South American ingredients and flavours during lockdown,” explains Geddes, “which are variations on what she is already familiar with from Thai cuisine.”

Selva’s daytime look has a woodsier vibe than the UV nighttime aesthetic.

From the wall to the plate

Travel shows were Nuit Regular’s form of escapism during the first lockdown in spring 2020. She bought cookbooks and began experimenting with South American dishes at home.

“If you asked me before the lockdown if I’m ever gonna have a concept for this kind of food I would’ve said no,” she tells NOW.

With Selva, she saw a chance to indulge a burgeoning culinary interest while drawing on her Thai roots to create a menu that visually reflected the art on the walls.

“I grew up in the jungle in Thailand and immediately the idea of food from the jungle inspired me,” she says. “I said, what’s the rainforest cuisine in that area? I started to realize the food they were eating is very similar to Northern Thai cuisines.”

To put a Thai spin on these dishes, she uses variations in ingredients to achieve the sweet-sour-salty-spicy flavour profile shared by both cuisines.

Nuit Regular’s ceviche uses the natural flavours of root vegetables to bring out the dish’s sweetness.

She cites the ceviches as an example of how the menu makes regional connections. Whereas Thai cuisine would use fish sauce and sugar for the salty-sweet effect, she instead uses salt and the natural flavours from the vegetables. She also experiments with lime leaf particular to Thailand to vary the sourness. The end goal is a subtly shifting flavour profile.

“You get to build all your flavour while you’re eating,” Regular says. “A bite of sweet potato, a bite of corn, a bite of a sweet umami. The spicy is from the chili that you add in. Overall, you have the Thai flavour base.”

Inspired by the artwork, she also added in edible flowers. Many other dishes reflect the verdant artwork. The mushroom tostada nods directly to imagery on the walls – but asked if there’s playful reference to the psychedelic vibes, Regular just laughs.

A visual continuity between what’s on the wall and what’s on the plate have always been important. But she says the trend toward “immersive” or experiential dining concepts has intensified during the pandemic and not just due to escapism. The break from normal life allows people to pay closer attention to the world around them, she explains.

“During the lockdown we got to stay home, we got to cook, to sing on karaoke, to do drawings,” Regular says. “That never happened before because our life was very busy. We appreciate more of the art in our lives. It’s something that’s getting more and more important for everyday living.”