The trouble with Vegandale

Doomie's owners have "morality on tap" at three new restaurants in Parkdale, but will people be buying? 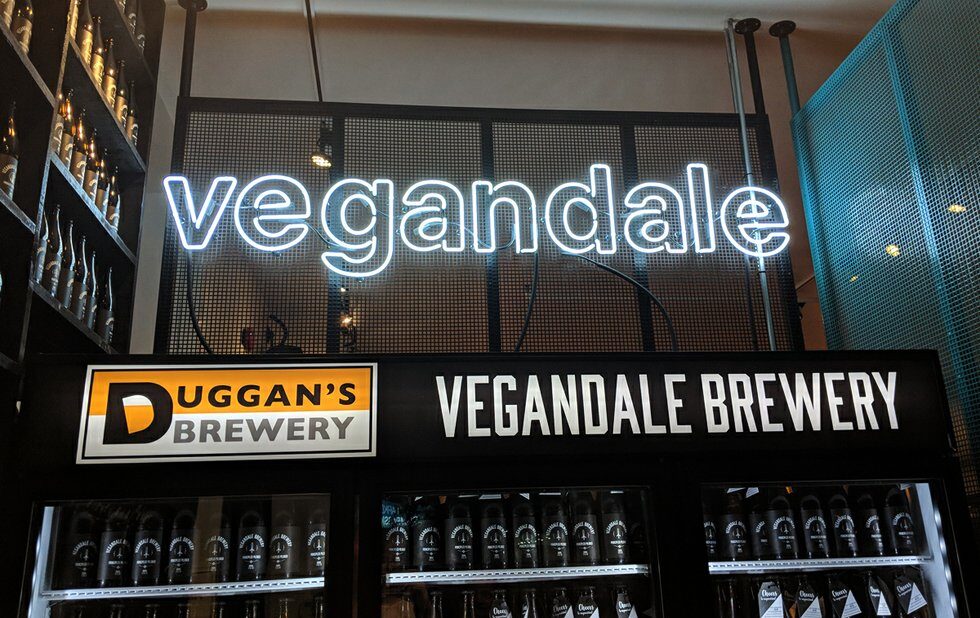 A neon "Vegandale" sign greets visitors when they enter the Vegandale Brewery.

Five minutes into my visit to Vegandale Brewery (1346 Queen West), I’m already debating whether to swallow a “Principled Pilsner,” a “See The Light Lager” or a “Morally Superior IPA.”

On the menu, tiny type describes the finer points of each pint, but it’s dwarfed by a series of leading questions printed in Brutalist all-caps: “Can you love animals without being vegan? No,” reads the annotation to the Sour Truth (“earthy, fruity, acetic”).

Same goes for the dessert menu from Not Your Mother, a dairy-free soft-serve counter set into the east wall of the brewery, with a funkadelic 70s-style logo (the name comes from “not your mother, not your milk”, a popular animal-rights slogan in the era).

All the menu names at Not Your Mother are 70s-themed. So are the cringey matching descriptions that needle diners as they choose between a Pina Colada Song (“Veganism is the love that you looked for, come to veganism and escape [exploitation]”) and an Apple II (“What’s more revolutionary than the latest Apple product? Veganism”).

My server, mercifully, does not respond to my request for an IPA with “Oh, the Morally Superior?” I send up a brief and silent prayer of thanks to the Vegan Baby Jesus.

I’d be lying if I said I went to Queen and Brock without a pre-existing beef (this pun and any subsequent ones fully intended) with Vegandale and its subsidiaries. The company has become the latest addition to a rogues’ gallery of villains (right up there with real estate agent Nick Brewerton and a smattering of corporate residential landlords) seen by locals and activists to be speeding along the hand of change in an area where low-income residents and immigrant communities are being steadily forced out by rising rents. In recent years, the neighbourhood has become the focus of local debate around condo-ification, affordable housing and food security.

The Vegandale saga began relatively quietly on this contested ground in 2016, with the opening of a spruced-up version of the crunchy Los Angeles eatery Doomie’s. (NOW featured its star menu item, a veganized Big Mac, on the cover of our vegan and vegetarian dining guide that year.)

Doomie’s local parent company, the 5700, opened a lifestyle boutique (the Imperative) and a diner (Mythology) in 2017. As the company expanded, it cemented pro-vegan rhetoric as its chief marketing tactic, adorning marquees over its shops with maxims like “Baby steps are for babies.”

I checked out these spots when they opened, but the sloganeering was an irritant that became a deterrent to visiting. I understood and respected that animal-rights-oriented veganism was their shtick – but I also wanted to order some vegan mac ‘n’ cheese balls or try a seitan steak with garlic mash without having a bathroom wall lecture me about my life choices.

The backlash began in earnest this spring, when the 5700 unveiled plans to introduce a whopping five new brands to the Doomie’s block for a grand total of eight, spread out over six different storefronts.

The company announced it would be taking over operation of Toronto’s Vegan Food and Drink festival, as well as food events in Houston, Chicago and New York City, tagging all of them with the Vegandale name. “Vegandale is just the beginning,” the release quoted company owner Hellenic Vincent de Paul as saying. “World vegan domination begins in Toronto!”

As Vegandale Brewery signage – bearing the slogan “Morality On Tap” – appeared on the window of Duggan’s closer to opening day, grumbling from residents turned into full-fledged outcry.

A community forum co-organized by Parkdale Life and the Parkdale Land Trust on August 4 – the same weekend as the 5700 held a “vegan block party” to celebrate the opening of Vegandale Brewery, Not Your Mother and Danish bakery Copenhagen – produced a list of community demands. Among them: that the company retire its Vegandale branding and cease expansion in the area that they remove “moral imperative” messaging from its signage and that they give back to the community through local and equitable hiring and contribute financially to local food security measures.

Toronto has reached the age of “plant-based” over “vegan” dining – one in which restaurants tend to position flavour, health, freshness, local farming and green living over animal welfare. The Vegandale team has pounced on that vacant niche, playing neatly into hoary stereotypes about preachy vegans. The louder they get, the more backlash they generate, which allows them to further entrench their image as unapologetic firebrands.

But as the criticism gets louder, Vegandale has walked back its “vegan takeover” rhetoric. A statement made by the company insists that when they refer to Vegandale, they are “only referencing the five businesses we operate and do not look to rebrand the neighbourhood at large” – as if they themselves didn’t insert the name “Vegandale” multiple times into a rendering of the neighbourhood.

The statement adds that their hiring practices are inclusive, locally focused and LGBTQ+ friendly, and that they understand they “have a responsibility to give back to Parkdale going forward”. Vincent de Paul told the National Post that he has been in contact with Parkdale neighbourhood groups and plans to commit to contributing to a “local food justice” initiative.

But still there’s no real indication that the Vegandale folks fully understand why people are so upset by their presence: The Post quoted Vincent De Paul as attributing the backlash to “vegan” being a “trigger word”.  “‘I think if I opened five bicycle shops and called it Bikedale, no one would care,” Vincent de Paul said.

But they just might have if the neighbourhood was already very well-served (possibly over-served) by bike shops. Or if their laundromat, or food bank, or apartment had been recently displaced because the landlord wanted to bring in a bike shop. Or if the cheapest bike in all five of those stores was a $1,200 Bianchi. Or if, after all that, those bike shops put signs saying “walking, driving and taking transit are unethical – buy a bike” in every single store window. 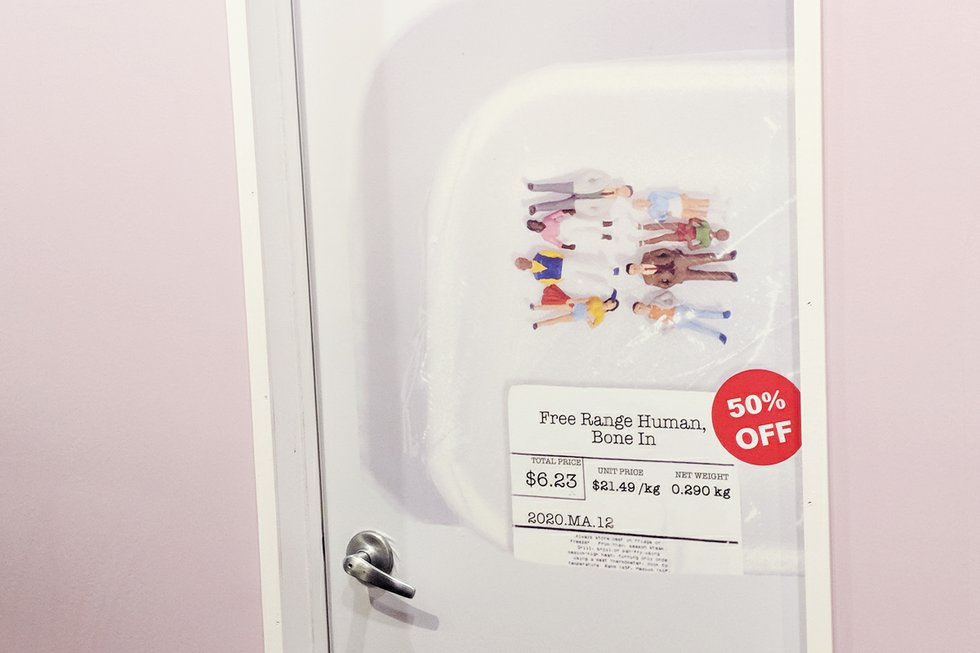 Vincent de Paul has said the rabble-rousing messaging around Vegandale is meant to be light-hearted: “I think the majority of people understand that we’re having fun while talking about an issue that we see as very important,” he told Toronto Life in March. But it’s hard to find self-awareness anywhere in this self-styled vegan utopia.

Even the more tongue-in-cheek facets of their branding and design – kitschy photographs of action figures packaged in Styrofoam meat trays and labelled “vegan jerky” – are steamrolled by the Employee Of The Month portrait of a cow praised for slaughtering humans, the comics at Doomie’s, the murals at Mythology, the dish names, the menu blurbs, the marquees, the giant metal “V” statue covered in animal-rights slogans, on and on, each about as welcoming or subtle as a captive bolt pistol to the skull.

It makes sense to adopt a vegan diet because of concern for animal welfare, to want to promote that lifestyle to others, and even to want to use your business to do it. But everything about Vegandale is so trained on that single point, they’re preaching purely to the converted – and running the risk of alienating many, many diners who don’t want their sandwich to come with a sermon.

On top of that, common business sense suggests it’s a bad call to dilute your own customer base by focusing too tightly on one area. Eight businesses on one block might be enough of a novelty to pull in tourists and locals alike – but if you subtract all the potential customers Vegandale has turned off, then divide by eight, can the 5700 really still come out ahead?

Then there’s the issue of whether the 5700 is accelerating gentrification in the area. The company makes the argument that all of the storefronts they moved into were already vacant – as opposed to buying existing storefronts and evicting tenants to use the space themselves, which, as far as gentrifying tactics go, is one of the most odious. (Hey, Pizza Nova, don’t think we forgot about Dangerous Dan’s.)

The cogs of change were also turning long before Parkdale became Vegandale. Grand Electric, Chantecler and the now-closed Porzia, none of which were particularly low-income-friendly (though GE’s tacos did sell for $3.50 a pop upon opening) arrived on that block over half a decade ago. In 2012, city councillor Gord Perks went so far as to sponsor a ban on new bars on Queen West, fearing that the city’s nightlife scene would push out businesses that serve existing residents.

Gentrification is also far from unique to Parkdale. In fact, it’s the parasitic twin of modern big-city food culture, with up-and-coming chefs going where they can afford to open, only for local landlords to see a hipper neighbourhood emerge, and therefore, the possibility of higher rents.

But most gentrifying restaurateurs open one spot in a given area, not eight and they generally lack the huge quantities of sheer nerve required to enter a neighbourhood already in the midst of painful upheaval and then brag about transforming it for their own ends, all while holding themselves up as paragons of moral superiority.

Vincent De Paul has argued, accurately, that the restaurants the Vegandale businesses replaced (among them Boreal Gelato Cafe and the Commodore) were already catering to a higher income bracket. It is possible, and in fact entirely likely, that the storefronts currently occupied by the 5700’s businesses would have also become restaurants and bars geared toward a wealthier demographic (landlords gonna landlord).

But instead of six restaurants, there may have been a tailor, a greengrocer, a doctor’s office or a barbershop (or, hell, even a butcher) added to the mix, all serving the neighbourhood in different ways. Parkdale may be changing, with or without Vegandale, but having one entity take over a half-dozen leases in a single strip has a homogenizing effect. Toronto already has one Distillery District, and it would be a shame for vibrant, scrappy Parkdale of all places to become its second – vegan utopia or no.

In the meantime, Vegandale Brewery and Not Your Mother are bustling with curious visitors, the product of Toronto’s fickle dining scene. Two more businesses under the 5700’s banner – a pizza joint, and a pop-up space hosting visiting chefs – are still set to open.

But there’s a new place to eat opening every minute in Toronto, and vegans are no longer hard up for options. It remains to be seen whether there are enough hardline faithful in town able to sustain a restaurant empire built on self-righteousness – or whether its creators flew too close to the sun on synthetic, cruelty-free feathers.