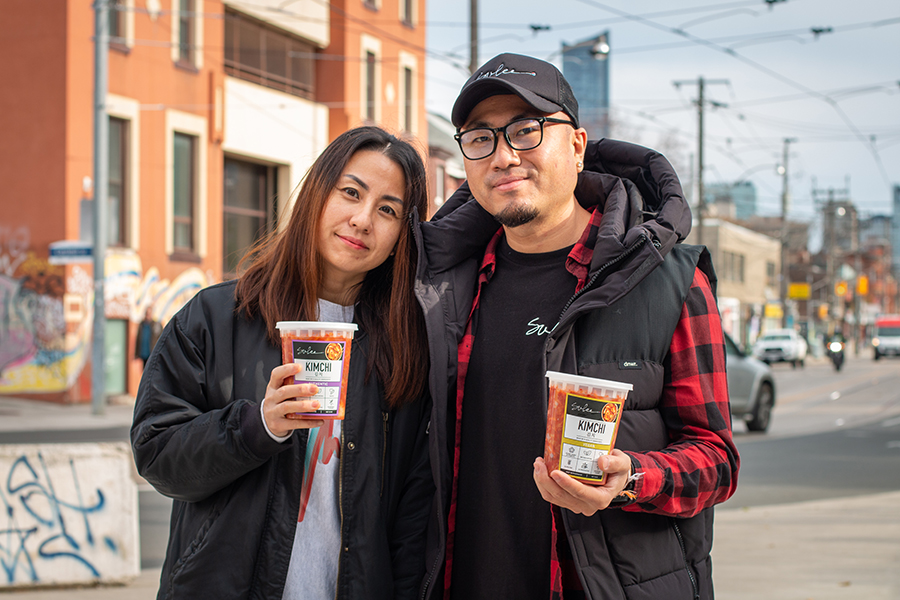 When creating SuLee, siblings Mike Won and Su Jin Won knew just how important it was to perfect their product: kimchi.

Thought of often as a side dish you have with your meals in Korea, kimchi is easily one of the most important dishes to master in Korean cuisine.

“When older Korean people go to a Korean restaurant, they say that if the kimchi is good, then their whole food is good,” Su Jin Won says.

“[It’s] everything in the Korean culture,” adds Mike Won. “There’s so much you can do with it. You can pair it with your meals, you can enjoy it on its own and you can even cook with it.”

Launched in April 2021, the business sells kimchi via its website and the Toronto Market Company. Products are also sold in grocery stores like McEwan Fine Foods and will be available at their new brick-and-mortar location SuLee Dosirak at Market 707, along with other items like banchan, rice and braised meats.

But what really sets SuLee apart from other Korean food businesses in Toronto is the customizable kimchi: customers can choose between fresh and fermented, vegan or non-vegan and select their preferred spice level.

“We actually started offering fresh kimchi and allowing customers to experience the whole fermentation cycle, which normally takes about two to three days, depending on the temperature of people’s homes and the weather,” says Mike, who handles marketing, delivering and sales.

“We found that there’s a fine line of individuals who like it fresh and experience the fermentation process to their liking and customers who like it fermented. Us Koreans [usually] like it more fermented because it’s so versatile.”

With fermented kimchi, you can make “a plethora of dishes” – kimchi jjigae, Korean stew with chopped veggies, tofu and pork belly; kimchi bokkeumbap, a fried rice; and kimchi buchimgae, a savoury pancake, to name a few.

SuLee offers a variety of kimchi, such as vegan kimchi (left), and non-vegan kimchi (right). The kimchi in the top portion of the plates are fresh, while the kimchi at the bottom portions are fermented. SuLee also offers a fire spicy kimchi (centre).

Su Jin, who has more than 25 years of experience working in restaurant kitchens, is SuLee’s chef. For her, making kimchi is a meticulous math equation that she constantly tweaks to factor in different temperatures and climates.

“I visualize the taste in my head and all of the ingredients,” she says. “If it comes out the same when I taste it… you don’t know that feeling. It feels amazing.”

To make one batch of kimchi, Su Jin says she has to brine the nappa cabbages for a number of hours, depending on the temperature. She then strains the water out. While straining, she cuts and prepares the other ingredients. This includes radish (which both siblings say they go heavy on) that’s cut into thick slices, kelp, leeks and beef broth for the non-vegan option (more kelp is used as a substitute for the vegan option).

“[Beef broth] provides a more savoury flavour that carries through much better because it’s sticky and it’s deeper and the flavour is much bolder,” Mike says.

Su Jin then mixes all the ingredients, including the spices, before packing and storing.

A tough upbringing and a mother’s legacy

Having endured difficult life moments growing up, both siblings are shocked at how far they’ve come along with their business.

“We hustled so much in life that a lot of people don’t know about,” Su Jin says.

“[But] we stuck together,” Mike says. “We always had sharp minds and learned everything on our own. And here we are today.”

It wasn’t just the siblings who had to endure difficult life moments. Their late mother, Hyun Su Lee, went through a lot too, they say.

They created SuLee to not only sell authentic kimchi but to carry on her legacy. Mike says their mother had been cooking 30 years before she died in 2018 from cancer.

“After she passed, I had that thought of not doing enough for her while she was still around,” says Mike, who quit his six-figure job during the COVID-19 pandemic to commit to her legacy. “We always thought she was going to be around. We saw her as Superwoman.”

The siblings say they’re doing whatever they can to dedicate their business to their mother. Her legacy is apparent in the business name, the logo that incorporates her signature and her kimchi fridge that is now located at their Market 707 stall.

The siblings say that SuLee’s treasured kimchi is also made with the same quality sourced ingredients that their mother used, and undergoes the same preparation.

“Every time I make kimchi, I feel like my mom’s always beside me,” says Su Jin, who cooked alongside her mother for many years. She can visualize her mother telling her how much of each ingredient to use to maintain the perfect ratio.

“It turns out perfect every time,” she says.

“I’m very fortunate to be partnered with my sister because she’s the one who pretty much mimicked my mom’s processes and her ingredients,” Mike says. “Now my mother can live on through food.”

Along with the recipes, the siblings’ late mother’s signature is incorporated in the business.