Meet the woman behind GreenPort, the dispensary devoted to inclusivity

GreenPort, the first Canadian cannabis company owned by a woman of colour, is all about bringing weed back to its roots 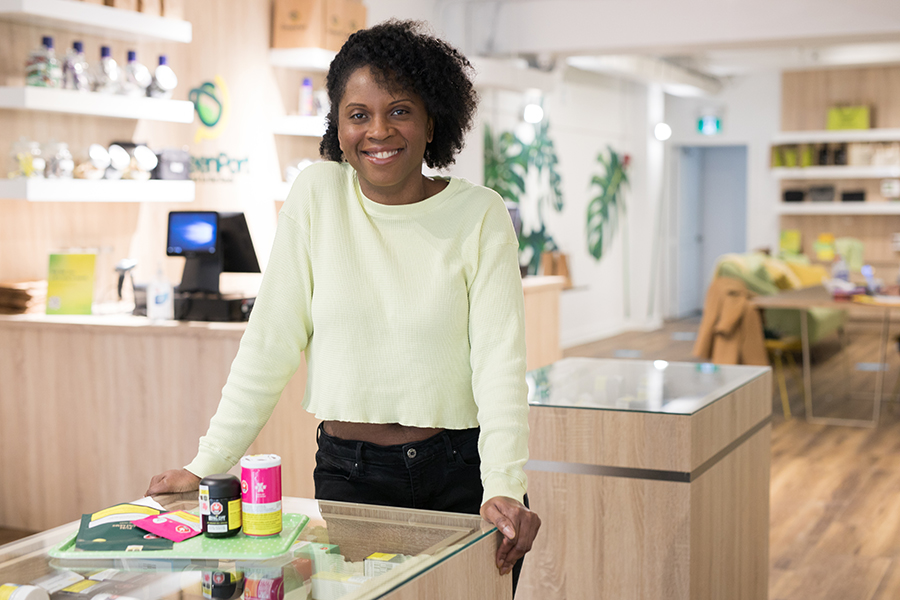 Vivianne Wilson wants to bring weed back to its holistic roots.

Wilson is Jamaican and her earliest understanding of cannabis was that it was used for its healing properties. Her grandparents would steep the leaves to make pain-relieving tea.

As the first woman of colour to own a cannabis company in Canada – her dispensary, GreenPort, opened in Little Italy last fall – representation and re-education about the plant are integral to her business.

GreenPort has prioritized community outreach and destigmatizing weed consumption. On the opening day in October, DJs played outside. Wilson says she wanted to ease the neighbourhood into the idea of another dispensary. Mindful of COVID safety, they used Eventbrite registrations to control crowd flow.

Wilson says she wants people of all ages, from grandmothers to granddaughters, to come into the store and feel comfortable.

They have regulars who swing by for curbside pickup, and she’s noticed a rapport between staff and customers that she hopes to see grow as COVID restrictions loosen and storefront retail is allowed to reopen.

One of the downers about opening during a pandemic, Wilson says, is not being able to engage more customers.

“We don’t know what operating this type of a business in a normal setting is, and that’s really the downside to this entire process.”

With that in mind, GreenPort has set up an e-commerce website designed to mimic the service you might get in-store, and guide you through products or activities you may be interested in trying. It’s aimed at beginners who aren’t sure exactly what they’re looking for but who have an idea of how they want to feel.

The GreenPort back story

Wilson had a licence from the federal government to sell medical marijuana but felt a shift happen and decided to explore the recreational side. It was a timely premonition.

“We’re still not in an ideal situation, to say the least, but it’s good to have this storefront to be able to do what we’re doing.”

Wilson also uses her platform to speak out about the double standard in how corporate cannabis companies and everyday citizens who consume weed, especially in racialized communities, are policed.

Wilson says that part of cannabis history is part of a re-education she has had to undergo herself to unlearn harmful stereotypes about weed and the people who use it.

She felt the huge stigma associated with being Jamaican and weed shortly after moving to Toronto as a young person. She says her relationship with weed was “broken and frayed” since she felt she had to distance herself from something that she understood to be natural because of Canadian perceptions of it.

While the music of famous cannabis advocate Bob Marley was celebrated at school assemblies, misinformation about weed abounded. Wilson says she felt exasperated by the stereotypes she would hear about Jamaican immigrants.

“The reality is, most kids that were smoking weed didn’t look like me and yet we had to deal with the stereotype.”

The interior of GreenPort

Wilson uses oils and tinctures to help her with pain relief. She’s allergic to over-the-counter medication. Yet for years, she says, she was suffering in silence as no doctors were able to suggest an alternative.

GreenPort has an extensive list of THC, CBD and hybrid oils and concentrates, but their top sellers are, not surprisingly, edibles and flowers. Wilson says that almost 90 per cent of her customers want products with low THC and high CBD. They aren’t as interested in intense highs.

Wilson is hyper-aware of the saturation of dispensaries in some Toronto neighbourhoods. Not all of them will survive. But she says that customers come by and let her know when another one is popping up nearby, and she empathizes with their frustration.

“During the pandemic, a lot of small businesses that had been open for over 20 years have shut their doors, and now they’re replaced by dispensaries. That sense of community is now being reduced to a bunch of weed shops.”

She says the Alcohol and Gaming Commission of Ontario’s cannabis rollout failed to involve the strategic placement of stores. When she was applying for her licence and choosing the location for her shop, there was no other cannabis store listed on the directory that was nearby. But that’s not the way it turned out.

“None of us knew we were opening so close to each other until the signs were up,” Wilson says. “That is not great for the industry at all. ”

Ultimately, something will have to give because it’s not a sustainable model.

“The entire state of California has 600 [weed] stores, the entire province of Ontario is going to have more than 1,000 stores by the end of this year.”

Wilson says she is focusing on plans to showcase more local talent and educate people with in-store workshops when it’s safe.

She says she would also like to open another location once she’s weathered the current storm, to take her cannabis experience outside of Toronto, since many of her current customers come from as far away as Oakville to shop.