If you can stand the onslaught of cyclists and sounds from the DVP, this is one of the city's nicest walks 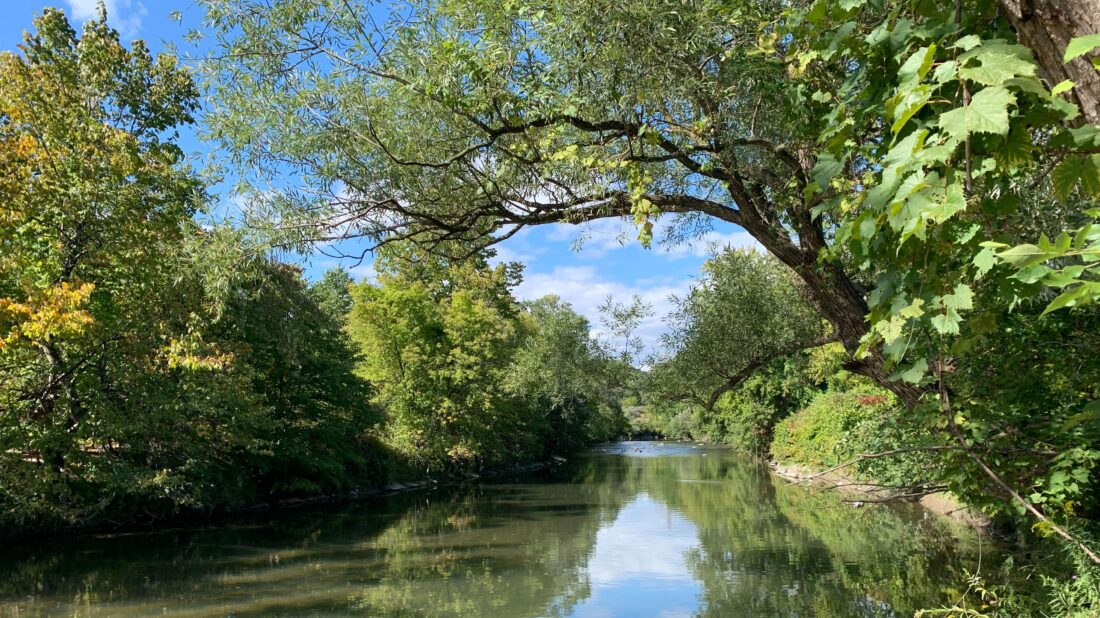 The Lower Don offers quiet places like this in the middle of the city.

Just because it’s Pumpkin Spice Latte weather doesn’t mean it’s time to hibernate. If anything, cooler, crisper air makes outdoor exercise more invigorating. Bundle up, bring a water bottle and get ready to work your body and soothe your mind during this uncertain time. In this series, I explore some of the city’s parks and streets. This week: the Lower Don River, an eight-kilometre, two-hour walk that goes from the mouth of the Don River up to East York.

The easiest way to enter the lowest part of the Lower Don is via Corktown Common, at Bayview and Front East, which I covered in an earlier walk. Or you can enter from the northeast, where Taylor Creek Park meets E.T. Seton Park (also covered in a previous column) and travel down. Either way, get ready for a decent hike, with lots to see. Just steel yourself for an onslaught of bikes. 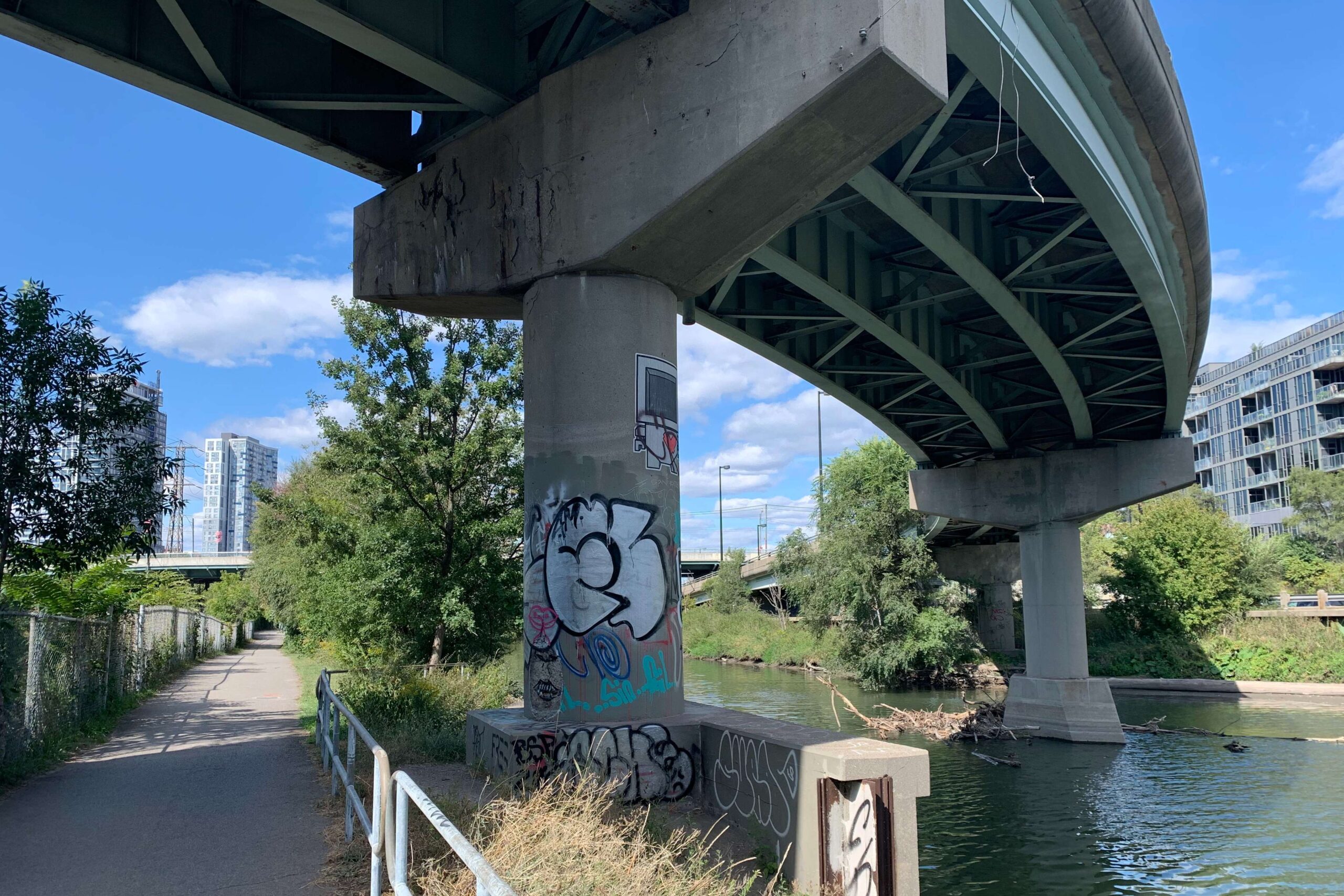 The early part of the Lower Don mixes bustling highway with quiet nature.

Not very. Although most of the path is asphalt (with a few sandy stretches, likely where the river has overflowed), there aren’t many entrances and exits, and none of them is wheelchair accessible. Besides Corktown Common, there are stairs at Queen East and Riverdale Park. Beyond that you’ll have to wait until Pottery Road. So once you’re on the path, prepare to be on there for a while. This isn’t just a casual walk.

Don’t expect any restrooms directly on the route. I spotted more than one cyclist hop off his bike to relieve himself in the bushes. Another note: at times the path gets very narrow. That said, frequent signs tell you how far you are to certain destinations, each sign with a location number if you’re in an emergency. 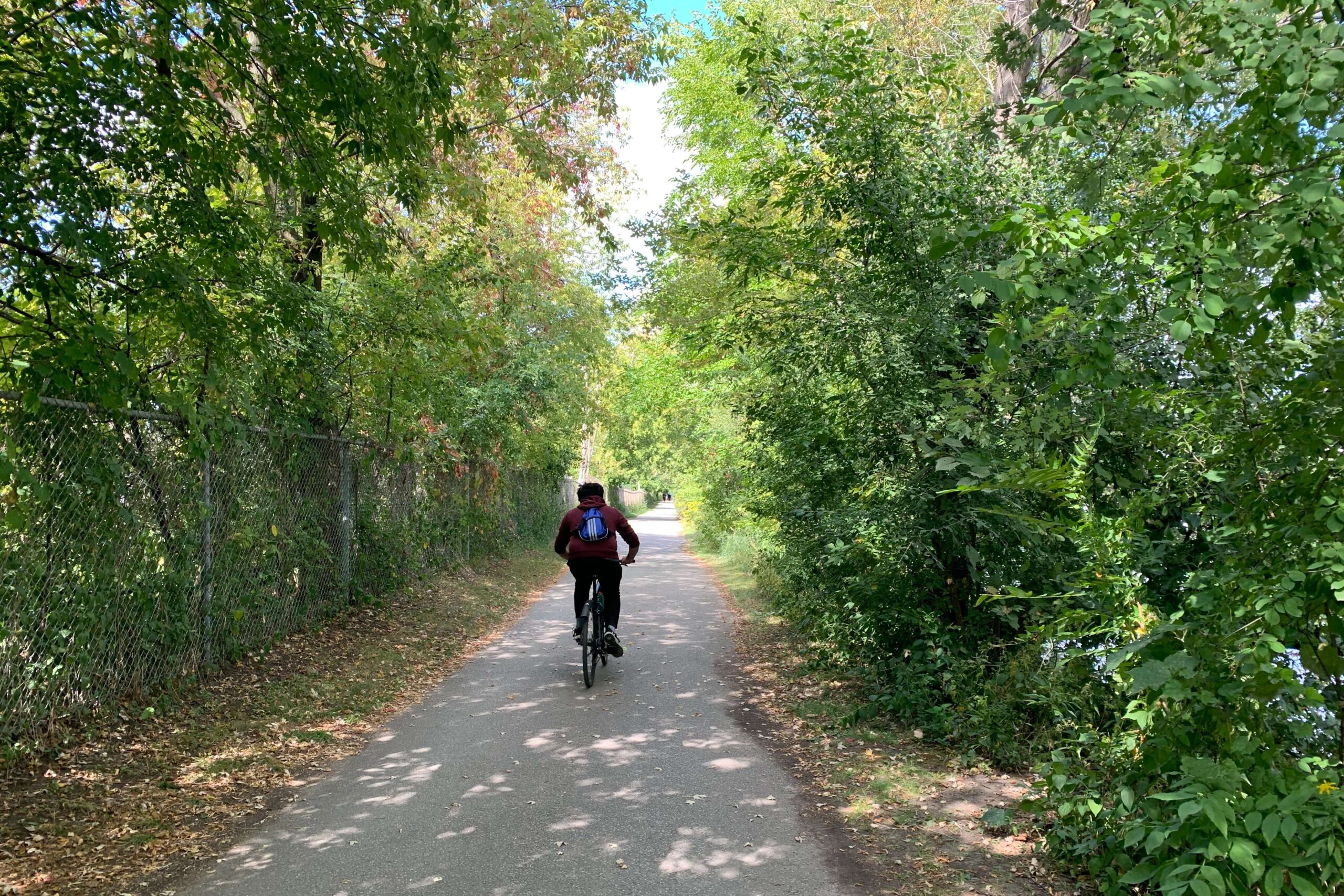 Trees provide a leafy canopy in some sections of the trail.

What can you see?

Each section of the Lower Don River walk has a different feel. At the foot of the trail, you’ve got the river on one side and an old rusty train track, with a few unused carriages, on the other. You’re in a valley, so it’s cool to look up at recognizable markers of Queen, Dundas and Gerrard overhead. Although much of the path is exposed to the sun, occasionally the trees provide a lovely leafy canopy that contrasts with the sounds of the Don Valley Parkway nearby. 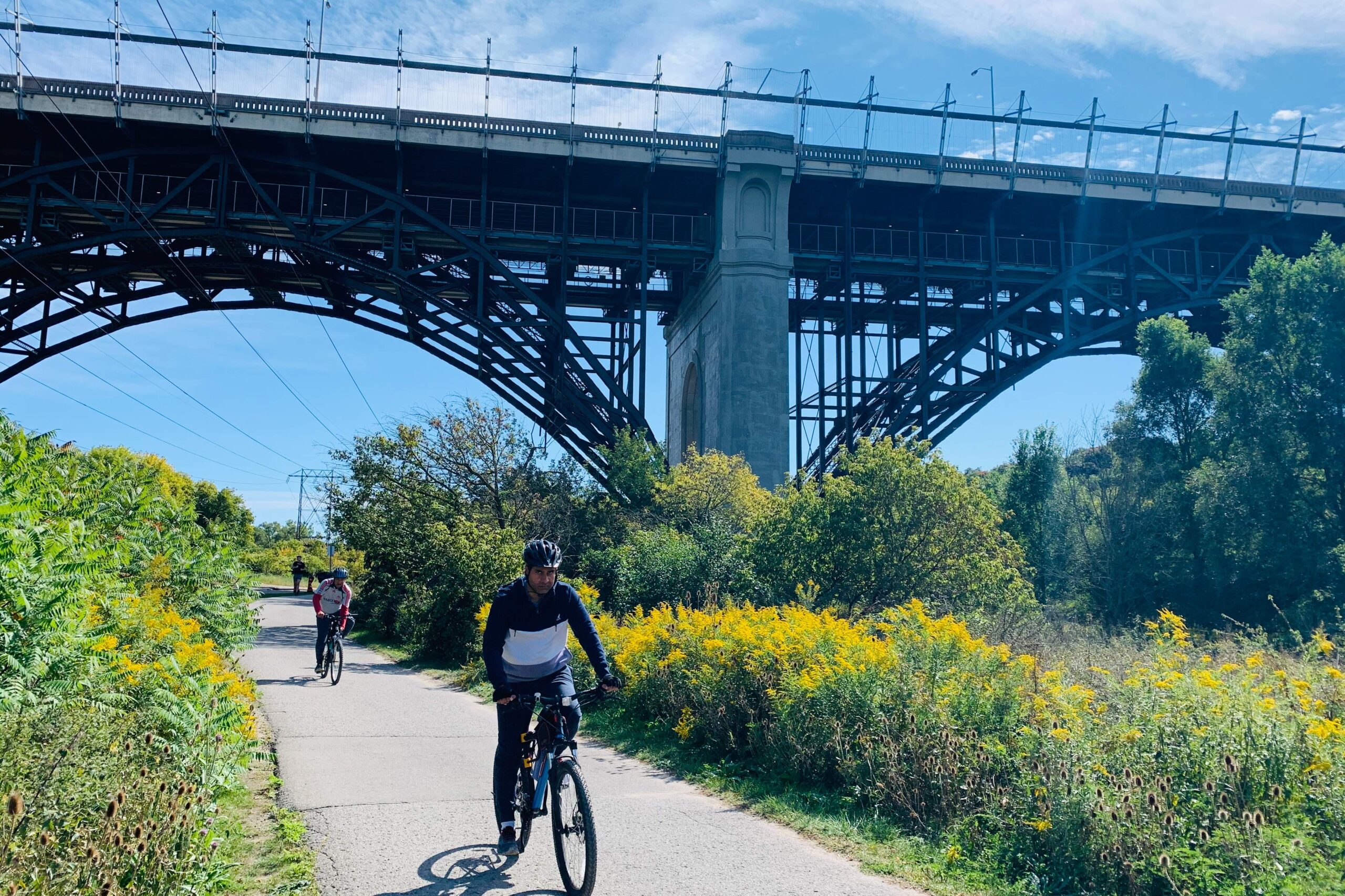 The view of the Bloor St. Viaduct is great, if you can avoid getting run over.

Approaching the Bloor Street Viaduct (actually called the Prince Edward Viaduct) from below is quite something. You get a true sense of its grandeur. Interesting fact: the bridge went up in October 1918, right when Toronto and the rest of the world was in the midst of the first wave of the Spanish Flu pandemic.

Just beyond the viaduct is probably the most popular spot on the Lower Don: the series of 14 concrete gargoyles by Duane Linklater, an Omaskeko Cree artist from Moose Cree First Nation. It’s odd to see these symbolic figures, which often adorn ledges high up on buildings, on the ground, like discarded ruins. But I think Linklater’s making a point about the exploitation of nature and the legacy of colonialism and industrialization. 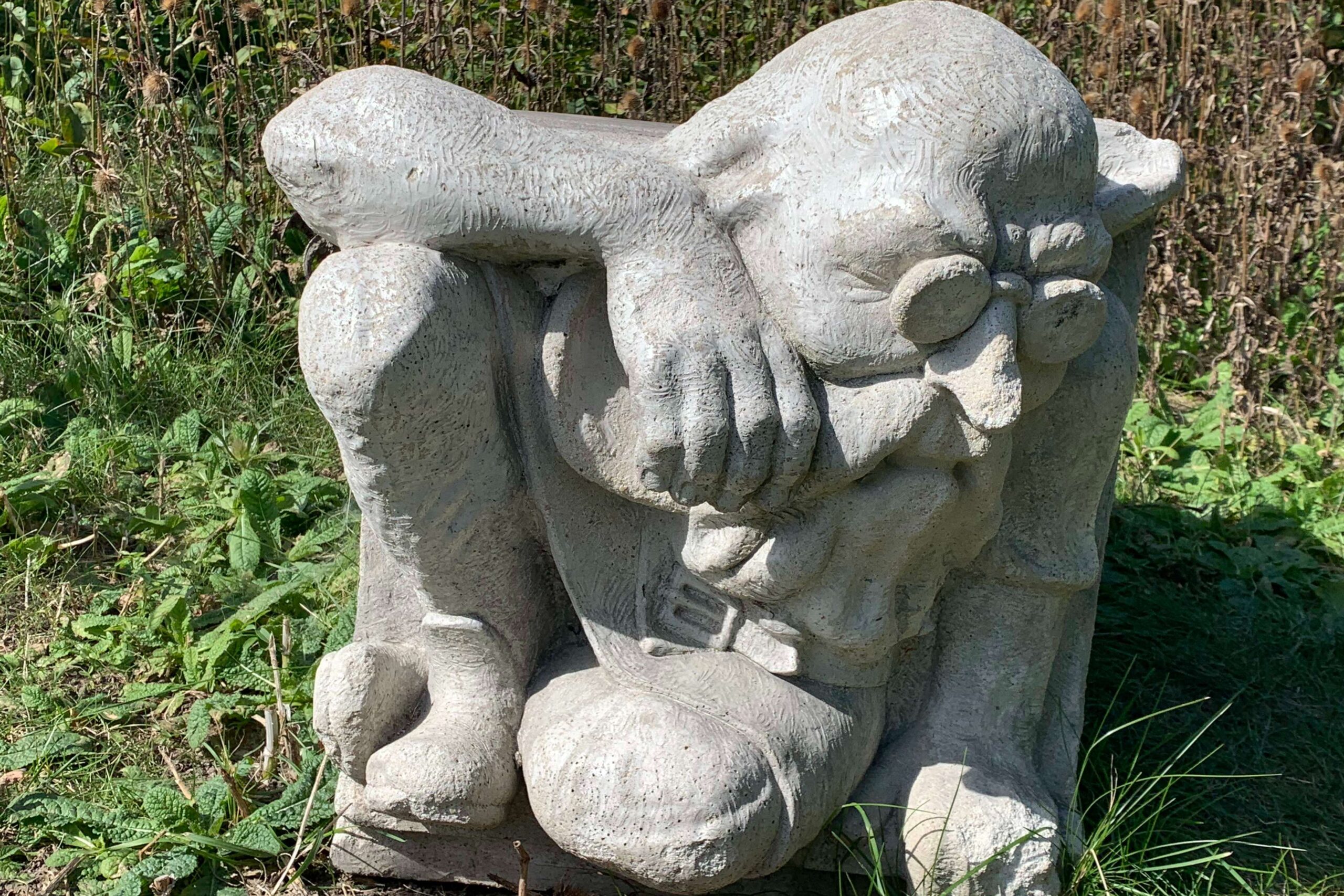 Duane Linklater’s installation of concrete gargoyles is one of the most popular parts of the Lower Don.

North of here, the trail gets hilly and offers some magnificent views of the river, including a little rapids area. Some especially nice spots have been marked out with railings and boulders to sit on. Elsewhere, don’t be afraid to just walk through the foliage and find a makeshift seat, rest and stare into the water. Remember: we won’t be able to do this in a few months.

The next junction is Pottery Road, which can take you to the Evergreen Brick Works (and join the Beltline Trail) or the Todmorden Mills Heritage site. (The Brick Works should have a public washroom if you’ve been holding it in.) While still on the Lower Don, you can turn off the path and walk to Crothers Woods, a popular hiking and biking area. Beneath one bridge I saw a very amusing installation consisting of canoes that looked like they were jutting out of the rocks. 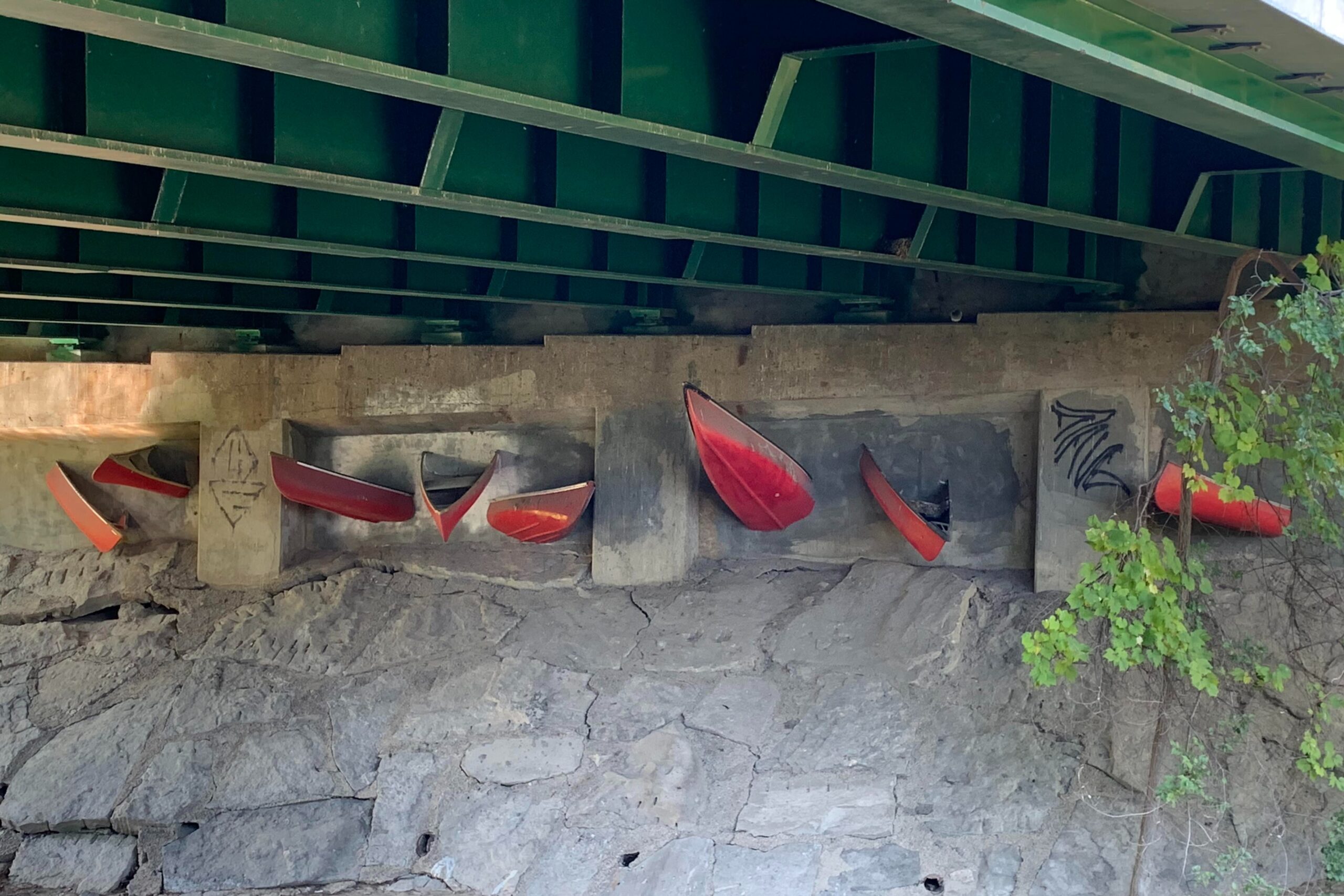 If you canoe the Don, be very careful or you might end up encased in rock.

If you keep on the trail you’ll eventually encounter some wetlands areas and come to those famous molar-like sculptures on the side of the DVP. You can keep travelling north to E.T. Seton Park and up to Sunnybrook, or east through Taylor Creek Park.

Who you’ll see on the Lower Don River

Okay, how to put this nicely? I encountered hundreds of cyclists. Most were considerate, but some would just zoom by, faster than the path’s speed limits (which vary from 15-20 km/h). It got so I had to keep looking behind to make sure no one would run me over. Sometimes I walked on the shoulder of the trail so I wouldn’t be in their way. During my two-hour walk, I only saw a dozen other walkers, and a couple of joggers. Why? It’s a long trail, with few entry points. Mind you, I did my Don River walk in the middle of a beautiful Saturday.

The Lower Don is understandably one of the nicest trails in the city. There’s something magical and Tolkienesque about being in a valley, unsure what adventures await you around the next corner. But alas, Sam and Frodo never had to contend with hordes of bikes or the drone of an expressway. So consider that if you want to travel there and back again.