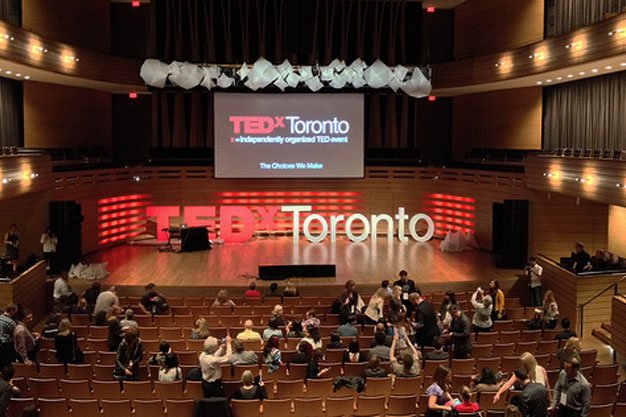 Toronto’s version of the iconic California-grownTED event is celebrating its 10th anniversary on October 26 at Evergreen Brick Works. What TEDxToronto attendees don’t see are the months of preparation leading up to TEDxToronto events. Mainly, the  time speakers spend working with a coach to refine their ideas and gear up for the stage.

“They call them the transformers,” says Danielle Castellino, Public Relations Director of TEDxToronto, referring to the team of coaches that help Toronto’s leading thinkers  deliver the talks that last up to 18 minutes. Every speaker is assigned a coach who helps them polish their message, customizing an approach for every individual speaker’s message.

Jeff Lohnes, Co-Chair of TEDxToronto and leader of the transformers, spoke with NOW to reveal a few tried and true tips his team employs.

“I think what happens with speakers is that they gain new perspective on the work they do daily. They haven’t had someone dig from the outside looking in,” Lohnes explained. “It doesn’t matter the subject. If they are a soccer coach, no one’s really said, ‘Let’s spend five months talking about how you coach soccer, what the best practices are, how the world sees soccer coaching and what they can learn from it.’”

Building trust with your audience

The audience’s perception begins with a speaker’s first steps on stage. Exuding a kind, confident and trustworthy demeanor allows the audience to connect with you. TEDxToronto coaches work with speakers on subtle techniques that add value. From facial expressions to outfit choice, each factor plays an important part in maximizing trust. A well-known business person might dress down, sending a message of approachability before they even start talking.

Attention spans run short in the digital age, and the first 20 seconds of any TEDxToronto talk are crucial. You want to give value right away. Engage the audience by posing an interesting question or making an unexpected point. People tend to want to speak chronologically, and that’s often not the most interesting or relevant part of their story.

Lohnes puts it into context for TEDxToronto speakers: “You’re about to talk to 1,200 people and take 15 or so minutes of their time. That’s roughly 300 hours of time you’re taking up on stage. How will you be interesting enough in the first 20 seconds to get one person in the audience to agree to go on a 300-hour road trip with you? That’s not even counting the millions of views TEDxToronto talks bring in online.”

The fear of improper memorization often drums up public-speaking nerves. While preparedness is key, the TEDxToronto team emphasizes familiarization over memorization. By becoming familiar with your story, the more apt you are to stand on stage and deliver it. If you’re deeply familiar with the point you want to make and how you want to make the audience feel, you can always get back on track. No one knows your talk, so if you mess up, don’t let the hysteria set in – find your way back.

There is no turnkey recipe, even with a kick-ass TEDxToronto coach and five months of preparation. It’s important that speakers hone in on both their strengths and their weaknesses.

For many that means managing nerves. “We work with people to think about a chill moment in time before they go out on stage. Mine is literally having tea with my aunt. It’s just a pleasant moment,” said Lohnes of his own ritual. Pre-stage rituals should help you achieve a feeling of balance. Exercise, meditation, a massage and a week of good sleep.

“With more senior speakers, we don’t talk presentation and delivery style as much. But there is still a lot of work to be done,” says Lohnes. “In some cases, no one’s told them where there are areas of improvement in a long time..”

The hours speakers and their TEDxToronto coaches put in must ultimately be for good reason. The simple genius behind these talks is that they use a story to deliver a single worthwhile idea that compels the audience to think differently or take action.

“What’s most exciting is that we’ve been able to sustain a volunteer-led initiative for 10 years. People could spend time in other places but they chose this one because it’s a positive, inspiring place to be,” Lohnes explains. “Individuals have found funding for their ideas. Past speakers have left their jobs to jump into passion projects or new roles with higher impact.”

Every year, TEDxToronto is proud to bring the stories of innovators and industry disruptors from all different backgrounds to the stage. On October 26, 2018, TEDxToronto’s 10th anniversary show will explore the theme of identity. Join in for a full day of engaging conversations with 14 powerful talks and a series of stellar performances.