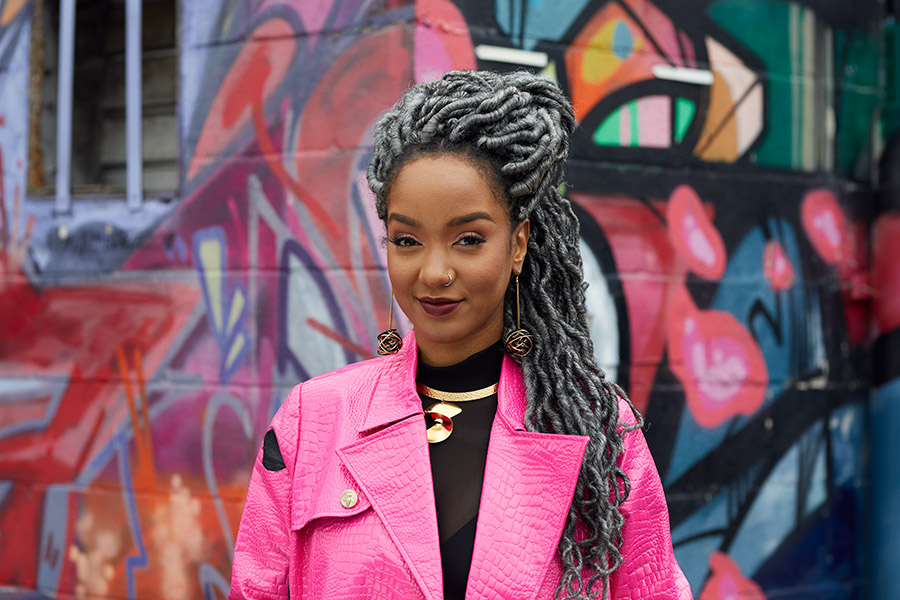 Amanda Parris is back with a vengeance.

The CBC culture reporter and host who spent years uplifting Canadian artists and Black voices in particular on shows like The Exhibitionists and Marvin’s Room and in her column Black Light is returning from maternity leave with her own show, Revenge Of The Black Best Friend.

The CBC Gem web series with a Key And Peele-ish sense of humour stars the incredible Oluniké Adeliyi as Dr. Toni Shakur, an author and TV host who takes credit for helping Black actors breakout from token roles like the sassy Black friend or the Black guy who dies first in a horror movie. It’s a fascinating behind-the-camera debut for Parris: a comical though equally unsettling show that is critically “reflecting on the history of Black folks in the screen world,” and interrogating where someone like her would fit in the industry.

“Now I’ve put an onus on myself that I can never create work that does the things that I’m critiquing in this project,” says Parris.

Revenge Of The Black Best Friend is informed by movies and TV shows Parris grew up loving, and the limited roles Black actors had in them. Think Gabrielle Union’s miniscule role in 10 Things I Hate About You. And then think about all the other Black actors who filled similar roles in other movies and shows but never had the opportunity to show off the breadth of their talent like Union would after jumping through hoops for years.

The show is also informed by workshops Parris attended when she pursued theatre. “I saw so many incredibly talented Black actors do phenomenal things on stage, and then they’d be like, ‘Hey, I’m going to star in this TV show.’ You turn on the TV show and they’re just like the buddy cop, sideline person or the best friend to the lead.”

Revenge Of The Black Best Friend’s third episode, The One Who Dies First, stars Araya Mengesha as the Black actor on a slasher movie set who pushes back against his immediate onscreen death. The episode is comical, but the experience isn’t just played for laughs. Learn To Swim director Thyrone Tommy handles the episode like a horror movie but with an overwhelming sadness, giving it an emotional pull. That visceral understanding of being tokenized comes in part from Parris’s own experience.

She is one of very few Black hosts at CBC. She describes emotional breakdowns in CBC offices with managers, where she had to call out instances where she felt like she was being used in that way. She heartily recommends speaking up in those instances.

“It’s important sometimes to just confront people and say, ‘I feel like you’re utilizing me as a token and it does not feel good. And I am not here to listen to your excuses. I just need you to hear that and hold that because this isn’t for me to hold by myself.’”

Parris gets the internal questioning that comes with being tokenized – where you wonder whether opportunities coming your way are someone else’s way of filling a quota. “There is a way that that can turn into imposter syndrome. And then there’s a way that it can turn into a critique of the system.”

This is a conversation Parris has been having recently with her friends: Refinery29 editor Kathleen Newman-Bremang and TSN host Kayla Grey. The three of them are receiving the inaugural Changemaker Award at the Canadian Screen Awards (CSAs) this year. The prize recognizes individuals who have fought for racial equity in media. For Parris and her fellow recipients, the prize spurred questions about the Canadian Academy’s intentions with this award.

“This question of why me? Why now? Why is this happening? Is this actually a reflection of the work that I’ve done and because I am deserving? Or is it because you are fulfilling your thing?”

Part of that question is not for her to answer, says Parris. She just makes sure that the doubt about other people’s intentions doesn’t lead her to question what she knows to be true, which is that she works hard and is extremely good at what she does. And she reminds herself that mediocre people, often white men, are rewarded all the time and never doubt why.

“So why the hell am I sitting here second guessing this stuff?”

For the record, whatever uncertainty Parris and her fellow Changemakers had regarding the CSAs intentions were quelled when they saw video testimonies from the academy members who nominated them describing in heartfelt detail why they deserved.

Being rewarded and celebrated for the activism in her work also informs the final episode in Revenge Of The Black Best Friend, which is the most inward-looking of the season. The episode is about Dr. Toni Shakur being called out for how she goes about “uplifting Black voices.”

Revenge Of The Black Best Friend’s first five episodes are widely consumable conversations about how Black performers are tokenized in a white industry. But the final episode is a conversation specifically directed towards the Black community. And while Parris hopes everyone takes something away from it, she isn’t all that bothered if it flies right over the heads of those who aren’t part of the conversation.

And going forward, this is the only kind of work Parris wants to do. She’s set a new standard for herself after becoming a mom. She’s only willing to do the work that excites and helps her push the conversation.

“That baby is the bomb,” says Parris. “I would rather hang out with him if the project is not going to make me feel as good as working on Revenge Of The Black Best Friend.”

Paulina Alexis: The Reservation Dogs is staying connected to home, hockey and her horse while getting back in the saddle for season two

Miryam Charles: The Quebec-based filmmaker is heading to Hot Docs with This House, a meditation on her relationship to Canada and Haiti following the tragic loss of her cousin

Alex Mallari Jr.: The Scarborough-raised actor shows his range in the time loop rom-com Hello (Again) and plays the heavy opposite Ryan Reynolds in The Adam Project

Thyrone Tommy and Thomas Antony Olajide: The director and actor duo behind Learn To Swim are giving Scorsese and DeNiro energy